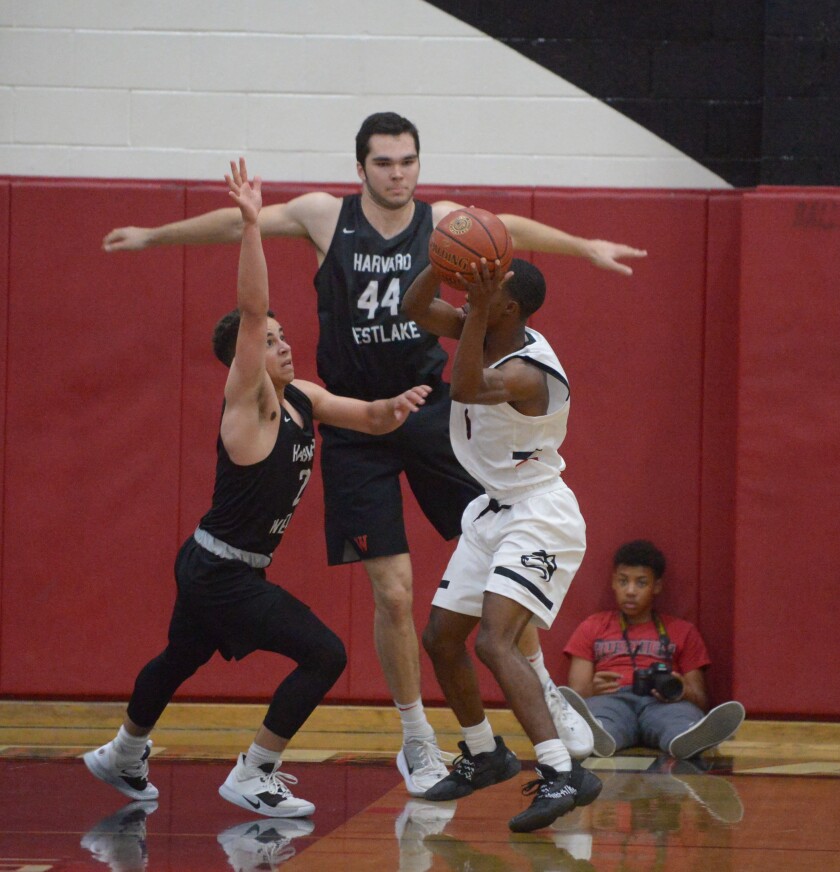 In a basketball era when talented guards have become as valuable as centers, Mason Hooks of Studio City Harvard-Westlake is holding his ground as a 6-foot-10, 255-pound giant unwilling to concede anything.

If you’re 5 feet 10, he’s ready to reject your shot. If you’re thin and weak, he’s going to flex his muscles and take the ball out of your hands. If you don’t like contact, he’s going to station himself down low, extend his elbows and get physical.

He offers no pity to smaller opponents. Like a fly being flicked away with a finger, he’s capable of clearing a lane by placing his body in the way and daring anyone to make him move.

Thunder. It’s a Mason Hooks dunk. And the glass backboard held up. pic.twitter.com/xTKsI94LUD

“Everyone wants to be a guard now,” Hooks said. “Being able to play down low, being able to rebound well is not super common anymore. It’s not as emphasized. It’s great to be a wing and shoot threes, but there’s a ton of people who can do that. I don’t think there’s as many people who play down low as well as I can.”

Hooks has helped Harvard-Westlake to a 15-1 start. His presence forces teams to do things differently. They can’t let him spend the game getting the ball inside. He’ll score if there’s no focus to stop him, but he’s equally adept at passing the ball to an open teammate. He’s averaging 15 points and 14 rebounds a game while making 62% of his shots despite double teams.

Not that Hooks is invincible. In an early-season game against Corona Centennial, he missed a dunk in the opening seconds. Then there was a series of missed second and third attempts under the basket that caused him to become so frustrated that coach David Rebibo had to intervene to remind him not to lose his cool.

With a nearly 4.5 grade-point average and an intention to major in molecular biology at Princeton, Hooks’ combination of intelligence and size presents challenges for opponents. He’s also a great team player who doesn’t mind being used as a decoy to create open shots for teammates.

Hooks still recalls the days when he had to carry a birth certificate because coaches would question how old he was when playing youth basketball.

He made his biggest impression when he shattered a glass backboard with a dunk at West Hills Chaminade in the summer of 2018. He got some cuts from the falling glass but no bill for the broken rim.

“I’m still smarting,” he said. “I’m very tired of finishing second. The thing is they’ve done a great job. I’m a big fan of Friedman, the way they’ve been able to keep the farm system stacked. A lot of of teams try to hit the home run in free agency and it doesn’t work out. He’s been very diligent about keeping the whole organization intact. We definitely need to strengthen the bullpen. You can never have enough.”

Hooks will put aside his Dodger concerns to begin Mission League play on Wednesday at Sherman Oaks Notre Dame and Friday at home against Mission Hills Bishop Alemany.

“I think one of the big strengths of our team is being able to play inside,” he said. “Some people say it’s old fashion, but I think you have to play to your strength.”