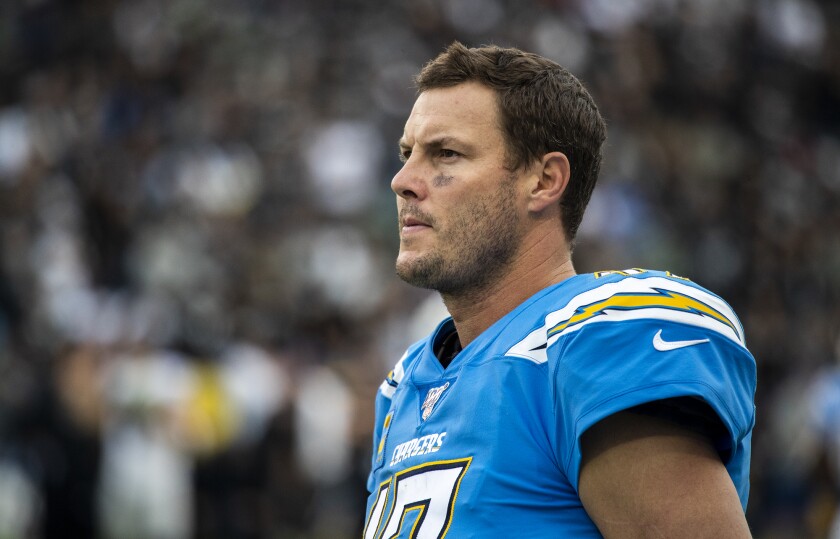 Column: Here’s why the Chargers need to part ways with Philip Rivers

Philip Rivers warned that he could reconsider.

But at that moment, standing at the lectern in Dignity Health Sports Park’s interview room following the Chargers’ 24-17 loss to the Las Vegas-bound Oakland Raiders on Sunday, he sounded certain about his intentions.

The 38-year-old quarterback wants to play again next season.

“That’s what I feel deep down as I stand right here,” Rivers said.

In the locker room around the corner, his teammates offered admiring endorsements.

“You couldn’t ask for a better leader,” Melvin Gordon said.

“I know I would like him to be my quarterback again,” Austin Ekeler added.

All of this is why the decision the Chargers have to make this offseason will be particularly heartbreaking.

After 14 seasons with Rivers as their starting quarterback, the Chargers have to move on.

Rivers maintained that he is physically capable of playing up to his standards but acknowledged, “That doesn’t mean that’s good enough for someone to want you to keep playing.”

Only a year removed from a 12-4 season, the Chargers are a 5-10 disaster. Rivers’ penchant for turning over the football is a major reason why.

To be fair to Rivers, injuries were equally, if not more, responsible for the team’s decline. The Chargers could re-sign Rivers, who will be a free agent, and hope they are healthier next year.

But the Chargers haven’t won a Super Bowl with Rivers and they won’t in the future.

In order for this version of the Chargers to become champions, they will have to be defensively oriented. What they need is a game manager, which arguably makes Rivers less suitable to lead them than the player backing him up, Tyrod Taylor.

Eighteen of Rivers’ passes have been intercepted this season, tied for the second most in the NFL.

Chargers coach Anthony Lynn said last week that injuries on the offensive line might have contributed to Rivers’ turnover problems, as tackles Russell Okung and Sam Tevi have been on the field together for only three full games this season. Okung was sidelined with a groin injury Sunday, when Rivers completed 27 of 39 passes for 279 yards.

The Chargers have granted Rivers an average of 2.64 seconds to throw per pass attempt, according to NFL Next Gen Stats. Only four qualifying passers have had less time to throw.

But Rivers has actually had more time to pass than he did in each of the last two seasons, when he limited his turnovers. He had 12 passes intercepted last year and 10 in 2017.

So his interception totals appear to be a reflection of his diminished ability rather than diminished protection. In their loss Sunday, the Chargers went three and out on their first three possessions of a game for the first time in Rivers’ career.

If the Chargers have determined they won’t win with Rivers, they might as well move on and do so as quickly as possible. They’re moving into a cavernous new stadium and can’t afford to delay their rebuilding process.

Rivers might be a future Hall of Famer and an institution in San Diego, but he isn’t a ticket seller here. He has continued residing in San Diego, limiting opportunities for exposure in the team’s new market.

With the Chargers potentially holding a top-10 pick in the next NFL draft, they could have a chance to select a quarterback such as Tua Tagovailoa of Alabama or Justin Herbert of Oregon. Taylor could serve as a one-year stopgap, and the money they don’t pay Rivers could be used to re-sign tight end Hunter Henry or extend the contract of defensive end Joey Bosa.

Of course, sentimentality could win out. The Chargers could very well decide to reward Rivers, who has gifted them with a touch of grace at a time when their owners are reviled and their move to Los Angeles has been widely mocked.

Rivers was once again charming and courteous Sunday, articulating his disappointment over his team’s record and explaining what it was like to play in a 27,000-seat soccer stadium where the Chargers were often visitors in their own home.

He also shared his belief that he was still physically capable of playing how he did last season.

“I’ve made some throws this year that have been as good as I’ve made in any year of my career,” he said. “I do still feel physically capable, and I do have the desire to prepare hard, as I have all year, and to try to lead this football team.”

When Rivers was told he sounded as if he has decided what he wants to do next year and is waiting to hear whether the Chargers have similar thoughts, he replied that wasn’t necessarily the case. He mentioned how he has a daughter who will start college next fall and a son in middle school whom he wants to coach at some point.

Asked whether he could imagine playing for another team, Rivers replied, “We have to let the dust settle a little bit.”

He said any questions about his future should be asked again in a few weeks.

“There’s too many emotions at this point in the year when you’re 5-10,” he said.

Whenever a team has to decide what to do about a player with his history and stature, there will always be too many emotions. The Chargers are about to be reminded of that.