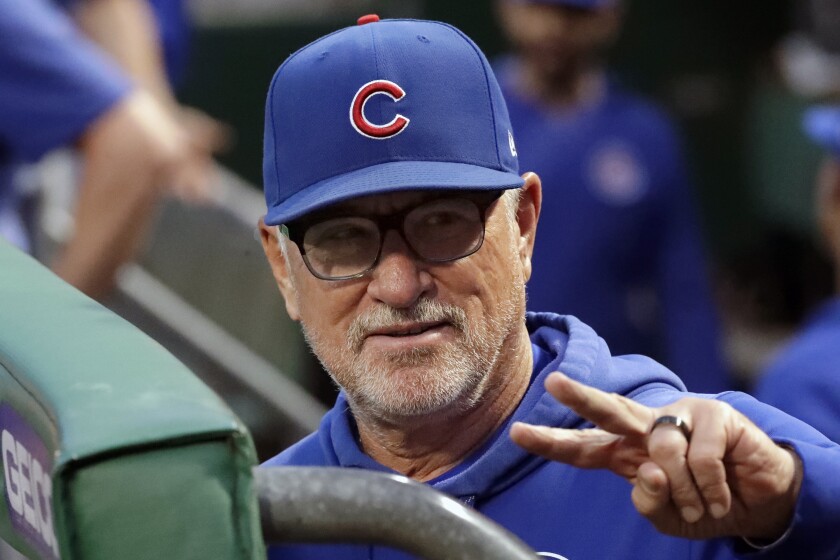 A baseball team desperately in need of a baseball story has smartly hired one.

His name is Joe Maddon, and he can’t put on that halo soon enough.

The Angels hired Maddon as their manager Wednesday in a move that should calm a few nerves, restore a little hope, and at least temporarily slow the ugliest of narratives.

A team mired in a drug scandal has brought home a former longtime employee who helped lead them to their only World Series championship.

A team that has been to the playoffs only once in the last 10 years has brought in the guy who managed the Chicago Cubs out of that infamous 108-year title drought.

A team in turmoil has hired the epitome of calm.

He turned Chicago’s Wrigley Field into a pregame petting zoo, once even conducting pregame interviews accompanied by a flamingo named Warren.

“My goal in life was to eventually own a bar named, ‘The Pink Flamingo,’” Maddon told reporters. “If that ever does happen, Warren’s going to be at the opening night.”

He once scheduled a pajama party for his team’s flight home from Los Angeles. It just so happened that Jake Arrieta threw a no-hitter against the Dodgers that night, after which he conducted a news conference while wearing a colorful onesie.

Through all this frivolity, there has been a common theme, and it is winning. He took the previously hapless Tampa Bay Rays to the World Series in 2008. He led the historically hapless Cubs to a World Series championship in 2016. His .540 career winning percentage ranks him 20th all-time among managers who have worked at least 2,000 games.

During the Angels’ World Series championship run in 2002, Maddon served as manager Mike Scioscia’s bench coach. Before many games that season, he would come out to the dugout early and sit with writers and talk old-fashioned baseball. He was sort of an unofficial tour guide to those witnessing Angel history.

He will need to fill that role again, guiding the Angels through the most difficult period in franchise history.

In the wake of last summer’s drug-related death of pitcher Tyler Skaggs, federal agents have interviewed one team employee and at least six former and current Angel players as part of their investigation.

ESPN reported that the team employee, media relations staffer Eric Kay, told federal agents that he supplied Skaggs with opioids and that he abused drugs with the pitcher for several years.

Right now, the Angels organization could not be more unsettled.

If nothing else, and if only until the next bit of unsightly news breaks, maybe Joe Maddon will get folks in Anaheim talking baseball again.