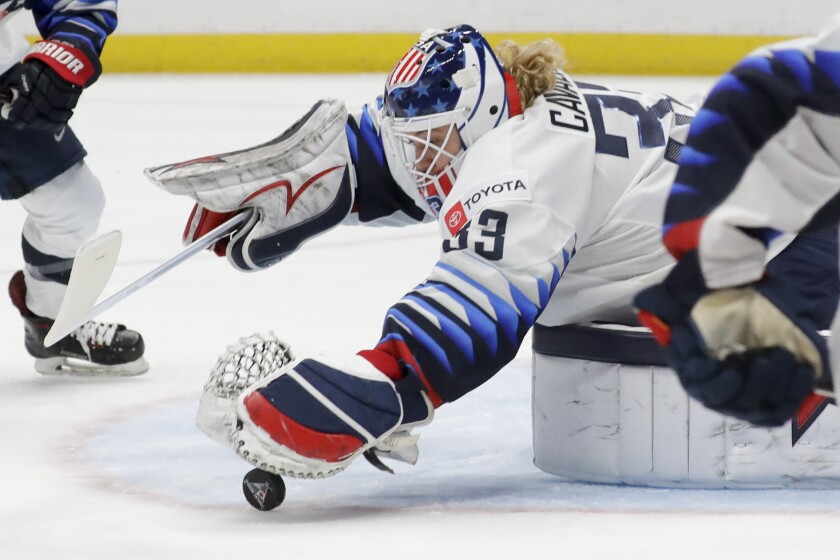 Column: Hockey is the big winner as U.S. women beat Canada before record crowd in Anaheim

The finale of the Rivalry Series between the U.S. women’s hockey team and their Canadian counterparts had a grander mission than selling women’s hockey, though the U.S. women’s historic first game in Southern California was a perfect promotion for an under-appreciated sport. It also launched or nurtured dreams among the kids who brought homemade signs and impressionable minds to Honda Center, inspiring them in ways they might not fully understand yet.

Fans who watched the U.S. defeat Canada 4-3 on Megan Bozek’s power-play goal during a scramble in front of the net 42 seconds into overtime Saturday saw strong, determined athletes ferociously compete for every inch of ice and loose puck. Some in the crowd of 13,320 — a record for the U.S. national hockey team on home soil — saw their future selves. Others got a peek at the future they hope their sisters, daughters or granddaughters will have a chance to enjoy.

Kids rushed to ice level during the warmups to press against the glass and hold up posters they’d made, glorious creations of wobbly letters and earnestly sketched red, white, and blue American flags. “Go USA. Kick Butt!” was one message. “We want the US to win,” proclaimed another, and others like it.

The game brought Kings fans together with Ducks fans and united members of the Lady Ducks youth hockey organization with the San Diego Junior Gulls and the L.A. Lions, the Kings’ program for girls and women. USA Hockey jerseys were popular, as were jerseys representing the Kings and Ducks and other NHL teams. Spontaneous chants of “USA!” broke out. So did gasps of awe or frustration. Small giveaway American flags were waved energetically by kids and adults, outnumbering scattered red-and-white Canadian flags.

The tone was passionate, as meetings between the reigning Olympic champion Americans and runnerup Canadians always are, even though the U.S. had clinched the series by winning three of the first four games. It was entertaining, featuring a brisk pace and the most precise passing on this ice this season — and yes, that includes you, Anaheim Ducks. It was a watershed moment.

“Pulling up to the building, I got the chills because of the building we’re in and you realize how big this is,” Tracy Clark of Saskatoon, Canada, the mother of Canada center Emily Clark, said as she and her husband, Del, chatted with friends on the concourse level before the game. “It’s so exciting. They always play hard and you never know which way it’s going to go.”

Bryce Drysdale and Joyce Chen of Huntington Beach came to the game with friends Chelsea Lancaster and Michael Tseng of Irvine.

Chen saw the U.S. and Canadian women play a three-on-three exhibition at the NHL All-Star game and wanted to see them again. “They had the women in the skills event, and that was really fun,” Chen said.

Bo Ford brought his 16-year-old granddaughter Gia, who plays hockey in Cathedral City. “We figured we’d come and check out this game and see what women’s hockey is all about,” he said.

They saw a game that was close throughout. The U.S. scored first, when Hilary Knight got a stick on a long shot by Bozek two minutes and 37 seconds into the first period, but Canada responded when Jill Saulnier drove to the net to jab a pass from Rebecca Johnston past U.S. goaltender Alex Cavallini at 3:01. Loren Gabel put Canada ahead on a two-on-one with a shot from the left side, and the U.S. matched that at 18:24 when Dani Cameranesi’s shot got between goalie Genevieve Lacasse’s arm and the post.

Canada pulled ahead at 2:56 of the second period, when Melodie Daoust capitalized on a defensive zone turnover by the Americans and beat Cavallini with a backhander. Monique Lamoureux-Morando brought the U.S. even nine minutes into the third period on a pass from former Lady Duck youth star Annie Pankowski of Laguna Hills, who had won a puck battle along the boards.

The winner of the game and the series was women’s hockey, which has struggled to sustain a professional league. Elite players have shunned the National Women’s Hockey League this season in favor of working to create a more stable league, and they’ve had to take extraordinary measures to maintain their skills. They formed the Professional Women’s Hockey Players’ Assn., which has staged clinics and scrimmages to provide the women a chance to play; ideally, the NHL will step in and provide logistic and financial support. It hasn’t done so, though including female players in the All-Star skills events was a positive step.

The U.S. and Canada probably will meet again in the World Championships, which will be played March 31 to April 10 in the Canadian cities of Halifax and Truro. They could play every week and it still wouldn’t be often enough to satisfy hockey fans and the young dreamers who watched so enthusiastically Saturday.