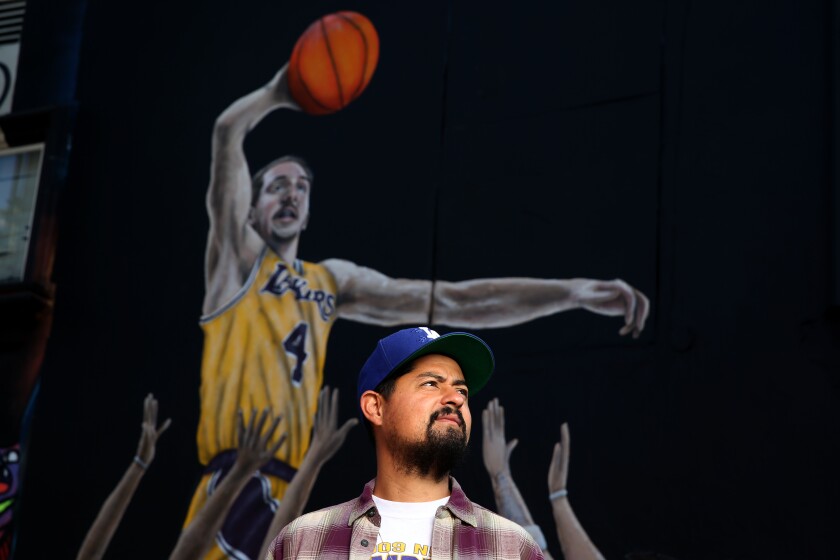 Column: How Alex Caruso played his way off the Lakers’ bench and into a mural near LeBron James and Kawhi Leonard

Near the corner of Melrose and Fairfax is a collection of photography and street art that pays homage to some of the city’s best NBA players. There’s a wall of pictures featuring Kawhi Leonard. Not far away is #MambaOnMelrose, a mural of Kobe Bryant made up of 413 triangles to represent April 13, the date of his last game. And half a block away, in a midsize parking lot facing Fairfax High, Alex Caruso is dunking on James Harden and a few other Western Conference foes.

The only thing more surprising than seeing a mural of an undrafted role player, who graduated from college averaging eight points a game, is seeing Harden’s defense immortalized. This is the same wall, mind you, that famously featured the mural of LeBron James looking up to Kobe, Shaq, Magic, Kareem and Wilt.

All of those greats have rings.

Caruso has yet to log a total of 82 games in three years.

He’s not supposed to be here. And for Gustavo Zermeño, the artist who did both the Caruso mural and those of the aforementioned Lakers greats, that is precisely the point.

“I had him dunking on the best players in the west because we’re number one right now, plus it shows that you don’t necessarily need to be getting paid out to be recognized for what you bring to a team,” Zermeño said. “He seems like a regular guy, very relatable and humble. I kinda compare him to Lamar Odom, not skill-wise but likability. There’s just something that makes you want to root for them.”

There’s no denying Caruso, who said he initially thought it was a joke when he learned about the honor, has become a fan favorite at Staples Center. When he enters the game, the cheers rival those received by the team’s two all-world players, and when he heads back to the bench his efforts do not go unrecognized.

Mascots are not crunch-time fixtures. They do not average 20 minutes a game, knock down big threes or catch bodies at the rim. And they certainly don’t do all of that while looking like a middle school teacher.

“I’ve had thin hair almost my entire life,” Caruso said, smiling. “I used to have facial hair but my girlfriend doesn’t like it, so I try to stay clean-shaven. But who knows, I may go full Rick Ross one day.”

In many ways he already has, considering the rapper’s first single was called “Hustlin’.”

Although the 6-foot-5 guard graduated from Texas A&M as the school’s career leader in assists and steals, he went undrafted and ended up playing in the 2016 Summer League for the Philadelphia 76ers. He was signed by the Thunder in late September but was waived three weeks later after the team acquired Reggie Williams. A short time after that, he was picked up by the Thunder’s G-League team, but the following year again found himself without a home.

That’s when the Lakers picked him up for the 2017 Summer League, the one that featured rookies Lonzo Ball, Josh Hart and Kyle Kuzma. While Ball and Kuzma grabbed the fans’ attention, Caruso played well enough to catch the eye of team executives who signed him to a two-way contract.

“When I got called up I thought I had made it,” he said about playing in his first game in 2017. “I loved everything about being in the NBA and wanted to stay, but it didn’t work out that way. It was frustrating but I tried to stay focused on the things I could control.

“I grew up with a religious background. As I’ve gotten older and met so many people, I’ve come to believe everything happens for a reason. There are no coincidences. There’s a reason I went back to the G-League and I ended up growing and improving myself mentally and physically. When I got my chance to play more minutes at the end of last season, I was able to show how much I grew. … It all worked out.”

Metta World Peace was at the final practice before the team embarked on its current four-game road trip. When he saw Caruso, he walked over, gave him a bro hug and said, “You’re killing it.”

“I’m so happy for him,” Metta said. “He worked so hard and it’s paying off. He would have made more money playing overseas but he stayed here in the G-League, worked his tail off and now he’s played himself into getting at least a couple of contracts.”

Last April, the G-League announced it was increasing base salaries to $7,000 per month. NBA two-way players like Caruso were set to earn $77,250, “prorated for days spent on an NBA G-League roster, and the NBA rookie minimum salary, prorated for the days with their NBA team, for maximum potential earnings of $385,000 next season.” This summer Caruso signed a two-year deal worth $5.5 million.

When I pulled into the lot to take a look at his mural, a car rolled in soon thereafter. A couple of guys jumped out and began taking selfies next to it. David Ramirez and his brother Diego said they were driving down the street when the giant Caruso caught their eye.

“This is so cool,” David said. “He looks like just a guy, you know, but he’s out there balling. Like I know he’s in the NBA but he doesn’t look like a NBA player. … It’s just so cool.”

That element to his story — he doesn’t look the part — is what catches eyeballs and inspire memes and nicknames like “Bald Mamba,” which is really curious considering Bryant was bald when his “Black Mamba” moniker became popular. But when you consider Caruso’s journey from second team All-Southeastern Conference to two G-League teams to three summer leagues, and now on the floor in crunch time for a team that’s a favorite to win the NBA title, his looks are perhaps the least interesting thing about him.

“I was listening to a podcast — it might’ve been Joe Rogan’s — and they were talking about fear,” Caruso said. “One of the first things that happens with anxiety and fear is that it impacts muscle memory. You might be really good at something, but as soon as you introduce anxiety you lose that natural instinct. So when I’m out there on the court I try not to think too much and just play ball. I’ve been playing my whole life, I love the game, so I try not to think about being in the NBA or playing in Staples. I just play.”