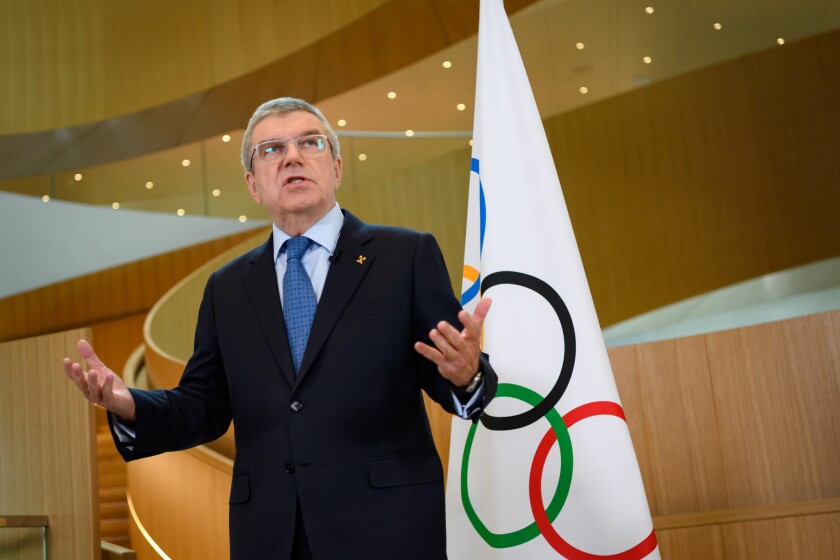 Column: IOC ultimately made the smart decision by postponing Tokyo Olympics until 2021

At least twice in the last week, International Olympic Committee President Thomas Bach took a stab at poetic imagery by calling the Olympic flame the light at the end of the tunnel the world is passing through during these terrible days of the COVID-19 pandemic. But it wasn’t until Tuesday that Bach saw the light of reason and announced the postponement of the Tokyo Summer Games.

And even then, long after it was apparent athletes confined by stay-at-home mandates couldn’t train properly and that no one could say when the novel coronavirus will subside, it took a rebellion by several national Olympic committees and powerful sports federations to pierce the IOC’s willful darkness and push the organization into making the delay official.

Full coverage of the International Olympic Committee’s decision to postpone the 2020 Tokyo Games until 2021 because of the coronavirus outbreak.

Two days after the IOC said it would take up to four weeks to consider its options and consult with its stakeholders — including the corporate sponsors and TV networks who fund so much of the gargantuan Games — Bach and company made an unusually quick pivot. As much as they wanted to wait until they could tackle some of the massive problems a postponement will cause, they knew they’d appear crass and uncaring if they didn’t immediately and decisively tell the world they were putting athletes’ safety first.

Appearing crass and uncaring had become an unofficial Olympic sport under previous IOC officials. As belated as this announcement was Tuesday, it actually was a sign of progress.

The Games, which were to have run from July 24 through Aug. 9, will be rescheduled “to a date beyond 2020 but not later than summer 2021, to safeguard the health of the athlete, everybody involved in the Olympic Games and the international community,” the IOC said in a statement. They will be known as the 2020 Tokyo Games. Feel free to add an imaginary asterisk.

The tricky business of securing housing for athletes, officials and spectators and of rearranging the international sports calendar are foremost among the IOC’s headaches. In addition, the participation of NBA players was thrown into question because of potential conflicts created by the new timing. It’s unclear whether the NBA will push this season into late summer and, if it does, there’s speculation the 2020-21 season might not begin until December. If the Tokyo Games are held next spring, which is possible, NBA and college players would be in the middle of their respective seasons and probably would be unavailable.

At least postponing the Games now provides time to begin resolving those problems. “With this decision, the work of planning a new version of the Tokyo Games is officially underway,” Sarah Hirshland, chief executive officer of the U.S. Olympic and Paralympic Committee, told Team USA athletes Tuesday. “This summer was supposed to be a culmination of your hard work and life’s dream, but taking a step back from competition to care for our communities and each other is the right thing to do. Your moment will wait until we can gather again safely.”

The postponement was a welcome note of certainty for athletes who have been jolted out of their careful routines. They lost training spots with the closures of the schools, colleges and gyms they used, and those who hadn’t clinched an Olympic berth were losing chances to earn a spot because qualifying events were canceled.

Distance swimmer Haley Anderson, a USC alumna who won a silver medal in the 10K race at the 2012 London Games and was the first U.S. athlete to qualify for Tokyo, expected the postponement but wasn’t convinced the IOC would do the right thing.

“There’s so much that goes into the Olympics and sometimes the athletes can be forgotten, even though they say it’s all about the athletes,” she told Times reporter Nathan Fenno. “Athlete safety and things like that aren’t always at the forefront of people’s minds. It’s nice this is actually a done deal now.”

Being a member of the U.S. women’s national water polo team gave two-time Olympic gold medalist Maggie Steffens good company as she processed her feelings Tuesday. Being a member of a team also gave her a big-picture perspective while balancing her thoughts about the delay against knowledge of the suffering caused by the COVID-19 pandemic.

“I was just mentioning to someone about our value of always putting the team first. And right now, the team we need to put first is the world,” she said. “So putting the health and safety of that team, the world, as the No. 1 priority is the most important thing.”

Steffens, a three-time NCAA champion at Stanford, said she was prepared for the postponement but was hit hard by its finality. “As athletes, especially Olympic athletes, you’re constantly training for adversity and for the unknown. And for us usually that unknown and adversity is in a water polo game. So this is a much higher level of that,” she said.

Coronavirus tracker: Athletes and sports figures who have tested positive

Coronavirus tracker: Athletes and sports figures who have tested positive

A look at athletes, coaches and others in the sports world who have tested positive of the coronavirus.

Former UCLA gymnastics standout Danusia Francis, 25, was prepared to leave the sport after representing Jamaica in Tokyo this summer. She intends to continue through the rescheduled Games, though other athletes might not be able to make the same choice. Some already have put off jobs or school or lucrative overseas offers, and the change in timing could change their course.

It’s an easy choice for Francis though. Like Bach, she sees hope in the light of the Olympic flame. “It will be such an amazing way to celebrate coming through the other side of this epidemic,” she told Times reporter Thuc Nhi Nguyen. “I’m hoping that even though it has been delayed, it can be the light at the end of the tunnel and just be even more amazing than it could have been this year.”

Now it’s time to run, swim, jump, row and soar toward the light, hoping its warmth and brilliance will heal us all.

In the end, the International Olympic Committee had no other choice but to postponed the Olympics until 2021 because of the coronavirus outbreak.

With Olympics postponed, soccer great Carli Lloyd puts off retirement for a year

With Olympics postponed, soccer great Carli Lloyd puts off retirement for a year

A two-time women’s world player of the year, Carli Lloyd planned to make this year’s Tokyo Games her curtain call. Now she’ll delay her retirement for a year.