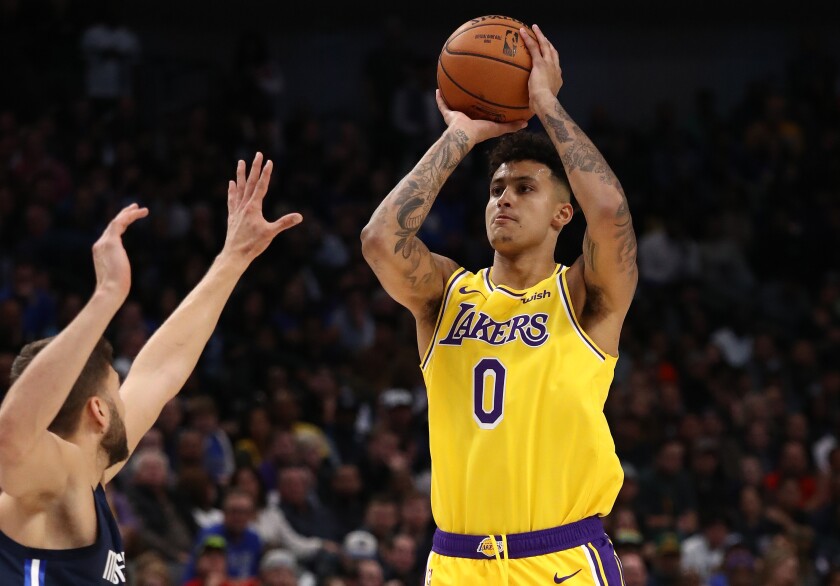 Column: Instead of trading Kyle Kuzma, here’s what the Lakers need to do

Chris Bosh did it. Kevin Love did it. Kyle Kuzma is doing it.

A player who is the de facto third wheel on a championship-caliber LeBron James team is always going to struggle. That’s what happens when a talented offensive player who is used to always eating suddenly finds himself on a restrictive diet.

A starter last season, Kuzma is coming off the bench and averaging 10 fewer minutes while taking five fewer shots per game. He’s also been stifled by injuries, which has hampered his ability to settle into his new role alongside James and Anthony Davis.

None of this should lead to his departure — at least not yet and certainly not for Bogdan Bogdanovic, who has a nice shooting touch but is neither the scoring playmaker nor the defensive wing the team needs.

Unlike Bosh and Love, Kuzma was not an All-Star before becoming a teammate of James. The way he’s playing, Kuzma is not going to be an All-Star alongside James. But Kuzma is clearly a talented offensive player and, as the Clippers’ Lou Williams has repeatedly demonstrated, you don’t need to be an All-Star to be invaluable to a team.

Instead of trading Kuzma, the Lakers need to be patient.

They could’ve moved him in the offseason but kept him because he has an inexpensive contract and plays well with James. Plus, he not only is undeterred by the pressure of being a Laker, he relishes it. He enjoys the spotlight and doesn’t shrink in big moments of a game. That did not seem to be the case with other members of the young core from a season ago.

Can he take over for James once the king finally relinquishes his throne? Doubtful — but that’s not the question of the hour anyway. The question is will Kuzma find his footing before the trade deadline? Yes.

Remember Bosh went from averaging more than 24 points in his last season in Toronto to 18.7 his first with James and Dwyane Wade in Miami. His field-goal percentage was down. Rebounds were down. Three-point shooting went from 36% to 24%. In fact, his points and rebounds declined each season with James.

In Love’s last season in Minnesota, he averaged 26.1 points. His first season with James and Kyrie Irving in Cleveland, Love’s scoring declined to 16.4, and then 16.0 on 41% shooting his second season. At times he looked like he had forgotten how to play.

In both instances the third wheel spoke of the difficulties of adapting to a new role.

Kuzma hasn’t regressed as much as he’s lost opportunities like his predecessors. The team just needs to help him find his way, the way it took Klay Thompson time to figure out life with the Golden State Warriors after they signed Kevin Durant.

If James and company find themselves on the losing end of their third matchup against the Clippers on Jan. 28, then maybe it will be time to use their best trade asset to tweak the roster.

While at 29-7 they currently hold the best record in the Western Conference, 20 wins have come against teams below .500. They are 0-3 against the Clippers and Milwaukee Bucks, and are the third-worst free-throw shooting team in the NBA. There are some areas of concern that, if the right deal comes along, should be addressed before the trade deadline.

More importantly, Kuzma’s early struggles aren’t enough reason to make a move. History suggested he was destined for a slow start and as the new third wheel he is going to struggle. You know the old saying, “it’s not you, it’s me?” Well in this case, it’s not Kuz, it’s being No. 3.