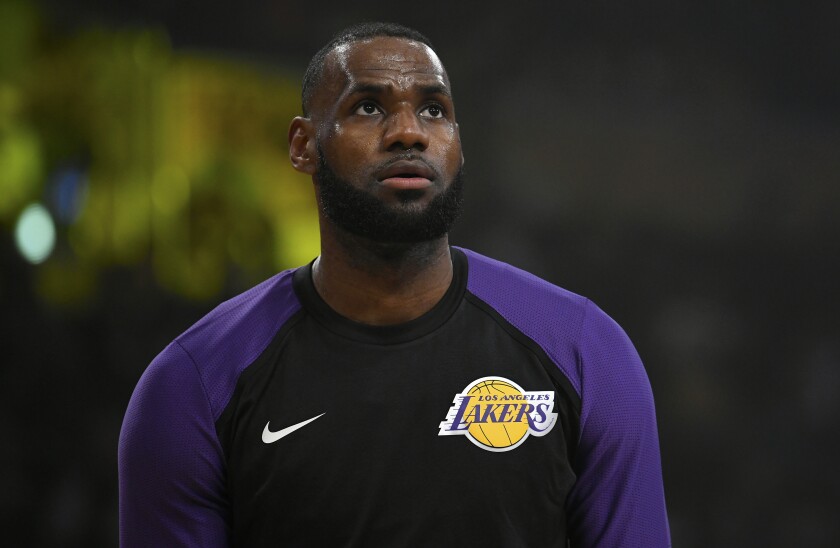 Column: Is it fair to single out LeBron James when the NBA makes millions from China?

On Nov. 24, 1965, Mobutu Sese Seko, a lieutenant general in the Zairian army, led one of the first documented military coups in Africa.

To maintain his power, Mobutu abolished political parties, used the country’s resources as his personal bank and suppressed all dissenters. And by suppressed I mean imprisoned and/or murdered. Mobutu leveraged his relationship with Western nations, including the United States, to eradicate his enemies. To prop up his lavish lifestyle, he bankrupted his country. He is credited with inspiring the term “kleptocracy.”

In short, if you search the term “oppressive dictator” online, his name can be found as an example.

He also funded one of the most iconic boxing matches of all time, the Rumble in the Jungle. Yes, THE “rumble,” which featured one of the most beloved athlete-activists of all time, Muhammad Ali. The Thrilla in Manila was also backed by a dictator, Ferdinand Marcos, who reportedly stole billions from his people, muzzled the media and ruthlessly targeted political opposition.

I’m not pointing out these transactions in an attempt to tarnish Ali’s legacy.

I’m doing so to reframe the legacy of LeBron James.

Given how he’s carefully crafted his voice on social issues, it’s more than fair to call James out as a hypocrite for his milquetoast response to the controversy regarding the NBA and China.

The reason I bristle is that chastisement of James is based on rewritten history, made to fit a narrative. Yes, Ali spoke out against injustices and suffered personally for doing so. He also took home millions in blood money doled out by governments that were as oppressive as modern-day China.

Now, clearly he did so in large part because he lost virtually all of his personal wealth after refusing to fight in the Vietnam War. But if the criticism of James is about the principle, then why Ali took money from murderous dictators should not overshadow the fact that he did. That’s how purism works — either you’re all in or not.

I don’t subscribe to naive purism because life isn’t written by Aaron Sorkin. In a “West Wing” world, leaders — be they elected or elevated — always rise to the occasion.

In the real world, however, well-meaning people stumble. They fall short. They’re human.

In our critique of James, who foolishly ushered in these comparisons to Ali himself, it is completely fair to point out actions that appear to be rooted in self-interest. To do so under the guise that other athletes with a similar passion for social justice have always gotten it right is not only unfair, but also patently false. My concern is that this false premise will negate in people’s minds all the philanthropic and social justice work James has done since he first entered the league.

Besides, although it’s true the rift between the NBA and China could potentially cost him and other players a lot of money, the tentacles far exceed the bank accounts of all-stars.

For example, the salary cap, which affects players who are not household names, is contingent upon revenue that includes money from China. Also, the combined desires of the NBA and FIBA, the international governing body of basketball, to start a league in Africa are affected, lest we forget China is the continent’s largest single creditor nation. And, by the way, China holds the greatest amount of U.S. debt by any foreign country, for those who are tempted to think, “Not our problem.”

Not to mention, the NBA’s relationship with China — with all of its human rights violations — began when James was in diapers. Why must James be held accountable for an ideological net that was initially woven by former NBA commissioner David Stern and strengthened by other league leaders who, thus far, have been able to sidestep criticism?

It’s not like the normally outspoken owner of the Dallas Mavericks, Mark Cuban, who is a fan favorite in China, is being asked to be a soothing balm. It’s not like Google isn’t struggling with freedom of speech and the culture of its business partners. It’s not like those American corporations affiliated with the Beijing Olympics abandoned ship.

This is what it means to walk the line between how things should be and how they really are.

Chances are, somebody who is upset with this column is reading it on a smartphone made up of parts manufactured in China. Maybe they watched James’ disappointing words on a device brought to them by human rights violations.

None of this means we are bad people, that we ignore the injustices of the world or that we shouldn’t attempt to make it a better place. But it does shed light on how difficult it is to hurdle the geopolitical obstacles before us unscathed.

So if one of us trips, even someone as rich and powerful as James, it behooves all of us to look at said shortcomings through the lens of a person’s life’s work. Romanticizing or rewriting history not only mischaracterize the present, but it also doesn’t provide much help in creating a better future.