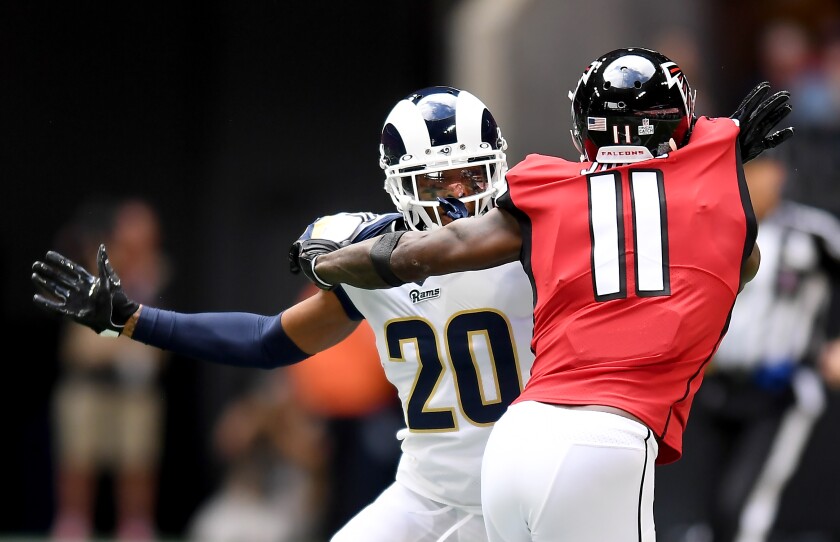 Everyone knew Rams cornerback Jalen Ramsey was fluid, but who knew he’d be so fluent?

After two practices with his new team, he slipped right into the lineup on the third play Sunday, and — going against All-Pro receiver Julio Jones for the first time — needed no interpreter for the coded language that job entails.

“Honestly, I was impressed he understood what I was saying pre-snap,” said safety Eric Weddle, essentially the quarterback of the defense. “Even seconds before the snap, I’d yell something out and I’d know he understood what I was saying. It would help put him in a different leverage or different spot on the field, knowing I’m anticipating what route he’s going to get.”

For the Rams, who frequently looked discombobulated in their coverages this season, that had to be refreshing. Cornerback Marcus Peters, traded to Baltimore last week, often appeared a liability back there. He made big plays from time to time — as he did with his pick-six against Seattle’s Russell Wilson on Sunday — but more than once was chasing.

As for Ramsey, he seemed to be attached by Velcro to the 6-foot-3, 220-pound Jones, repeatedly taking him out of plays. It was more of a back-and-forth battle, and Ramsey didn’t always win. Jones beat him for a 39-yard reception, and nearly got him again three plays later on a pass down the sideline that grazed the fingertips of the Falcons star and fell to the ground.

“The defense was a little bit dumbed down for me,” Ramsey said. “I really appreciate the guys going with that game plan. I’m not saying it wasn’t the best for them because they went out there and strapped too. But I just appreciate everybody’s help these few days I’ve been here.”

Jones got his numbers — six catches for 93 yards — but was denied a touchdown and picked up some of those stats in garbage time, when Ramsey was on the sideline. The two had a running commentary going throughout the game.

“I was talking,” Ramsey said unapologetically. “I talk [noise] every game.”

His day wasn’t all about shrouding Jones. Ramsey forced a fumble as well, using his shoulder to pop the ball out of the hands of running back Devonta Freeman. That didn’t lead to a turnover, as the Falcons were able to recover the loose ball, but it killed their drive.

Having Ramsey on the field allowed the Rams to play more confidently on defense, and gave the pass rushers a split-second more time to get to the quarterback.

Dante Fowler, who played with Ramsey in Jacksonville, had three of the Rams’ five sacks. For him, it felt like old times.

“Just to get that half-second, the secondary did an excellent job of holding it down today,” said Fowler, of a unit that had a cornerback-by-committee trio filling in for injured Aqib Talib, and rookie safety Taylor Rapp starting in place of injured John Johnson.

“I’m just happy to have a group of young guys like that,” Fowler continued, “that when their name is called, they’ll be ready. But Jalen is super good, very talented. We knew that. We trust him. He came out here and showed you guys why.”

The Falcons are really struggling, and the job of coach Dan Quinn is dangling by a thread. But it’s because of their defense, not their offense. Atlanta quarterback Matt Ryan had NFL history within reach, having thrown for at least 300 yards in his team’s first six games. Only Hall of Famers Kurt Warner (2000) and Steve Young (1998) had accomplished that.

But Ryan was limited to 159 yards with no touchdowns, an interception and a fumble, before suffering an ankle injury and leaving in the fourth quarter. The Rams rendered him ineffective, and a big part of that was limiting the damage by Jones.

“Having [Ramsey] on the team completed us as a secondary, and you saw that today,” cornerback Nickell Robey-Coleman said. “To come in cold turkey, coming into Wade [Phillips’] scheme, and to have him do what he did today and perform, that’s only a good sign about what we’ve got coming in the future.”

Weddle also is encouraged. He said the Rams are only using about 30% of their possible schemes and coverages as they transition to Ramsey, but that his ability to pick up the system on the fly only means the playbook will be wide open in the weeks to come.

“Getting into a lot of the other stuff that we do, so he can rep it and practice it and study it is only going to make him more dangerous,” Weddle said. “It will let us as a defense keep teams on their heels.”

In assessing his play, Ramsey was reasonably satisfied but said he could have played better. His breakdown was as bold as the bright yellow windbreaker he wore as he left the locker room. Clearly, he welcomes the spotlight.

“If I was really in my groove, on my [stuff],” he said, “it would have been scary out there. Put it that way.”