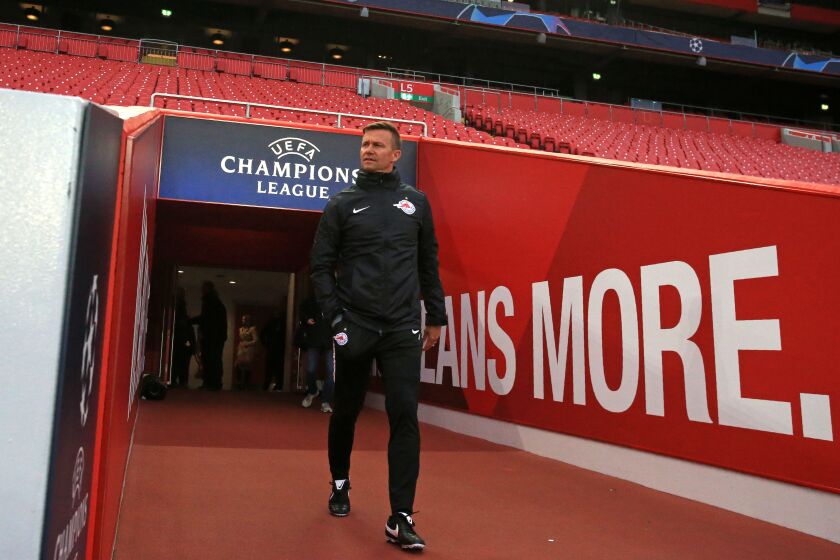 Column: Jesse Marsch’s success might inspire others to dream of coaching in Champions League

Forget the 321 games he played in MLS or the three consecutive league titles he won there. Never mind the years spent playing under legendary managers Bruce Arena and Bob Bradley.

For Jesse Marsch, the most valuable soccer lessons he learned were imparted not on a playing field or in a locker room but on a life-changing backpacking trip he took with his family six years ago, enduring deprivation and embracing diversity, and where the biggest takeaway was the most obvious one.

“When you take a trip around the world and see how people live, you see the good, the bad, the ugly,” said Marsch, who visited 32 countries on the six-month adventure. “You realize that football’s not that important.

“It helped me have a better sense of prioritizing what’s important in life. And in football.”

That’s not to say soccer isn’t important. Anyone who watched the video of Marsch’s passionate and profane halftime speech during his team’s Champions League match with Liverpool last month — a video that has been viewed tens of thousands of times on social media — knows he takes the sport seriously.

The trip inspired a major attitude adjustment by showing him the game is about more than just goals, saves and epic halftime speeches.

“It really solidified my idea that relationships are more important than tactics,” he said. “It reaffirmed my ideas of what football is. And it’s more about people than actually about the game.”

One beneficiary of that wisdom has been Red Bull Salzburg, which hasn’t lost in the Austrian Bundesliga and is averaging nearly four goals a game since hiring Marsch as coach last June. Along the way he became the first American to coach — and win — a Champions League match.

That could prove a significant breakthrough since Europe’s major leagues have openly sought the cash of U.S. investors and the skills of American players but have so far kept their doors mostly closed to U.S. coaches.

Bradley and current U.S. national team coach Gregg Berhalter are the only other American-born coaches to have managed top-division teams in Europe and their stays were inconclusive. Bradley, now the manager at LAFC, had brief stretches of success in Norway and France before a disastrous 11-game trial with Swansea City in the English Premier League. Berhalter was fired after winning just 18 games in parts of two seasons in Sweden.

Marsch, 46, says his job isn’t to blaze a trail for other U.S. coaches, but if he keeps winning, it will be easier for Americans to imagine the possibility of working in Europe — something Marsch once dismissed.

“I was thinking about coaching in MLS and establishing myself there,” Marsch, who led the New York Red Bulls to the league’s best record in 2015, said by phone from Austria. “I was never foolish enough to have a dream of coaching in the Champions League.”

Those plans changed last year when Marsch’s four-year run in New York, where he was the winningest coach in franchise history, earned him an assistant’s job at sister club Red Bull Leipzig in the German Bundesliga. That was followed 11 months later by a promotion to the head job with Red Bull’s team in Salzburg, where the global energy-drink giant is based.

The long affiliation with Red Bull and the brief stay in Germany prepared him for success in Austria, Marsch said.

“Being involved in the Red Bull system helped me because I had relationships with people in both clubs before I arrived,” said the former Chivas USA midfielder. “There’s three parts. The first is trying to learn. The second is knowing the people. The third is that I’ve worked really hard to adapt — and that’s the language, understanding the culture, understanding people so that they can see that I’m not just an American here.

“I’m actually someone who believes in the community and in the culture; the relevance of the club in the city that I’m working in.”

He learned parts of that while swimming in the Ganges, walking in Gandhi’s footsteps and climbing an Egyptian pyramid with his children.

“The trip had a big influence on Jesse in regards to coaching but also to life overall,” said Marsch’s wife, Kim, who chronicled the trip in the blog marschmadness.com. “We had five people with different personalities and preferences traveling together for six months straight. We always emphasized that we all had the same goal.”

“Yes, he wants to win,” Kim Marsch continued. “Good results are obviously a positive. But in the greater scheme of things, helping someone live their best life, getting someone to wholeheartedly believe in themselves or see things in a different light far outweighs what happens on the soccer field.”

Marsch’s professional journeys, which included a season in Montreal, have changed his family’s life as well. Daughter Emerson, 18, is fluent in three languages and is planning to attend college in Europe. Sons Maddux, 16, and Lennon, 12, who are also trilingual, have gone to school in four countries but have been educated in nearly three dozen others, learning lessons that aren’t found in books.

“It’s a different path,” Marsch said. “It’s not just about success. It’s about living life to its fullest.”

Which brings us back to the halftime speech in Liverpool. A rattled Salzburg had played a poor first half, falling behind the reigning European champions 3-0 after 36 minutes. So Marsch, unaware a documentary filmmaker was taping, unloaded in English and German during a salty pep talk that focused on respect and resolve.

Salzburg needed just 15 minutes of the second half to tie the score before eventually losing 4-3. But it was another lesson learned — one that, 10 years from now, will be remembered more than the final score.

It’s the journey, the coach had emphasized, not the destination that matters most.