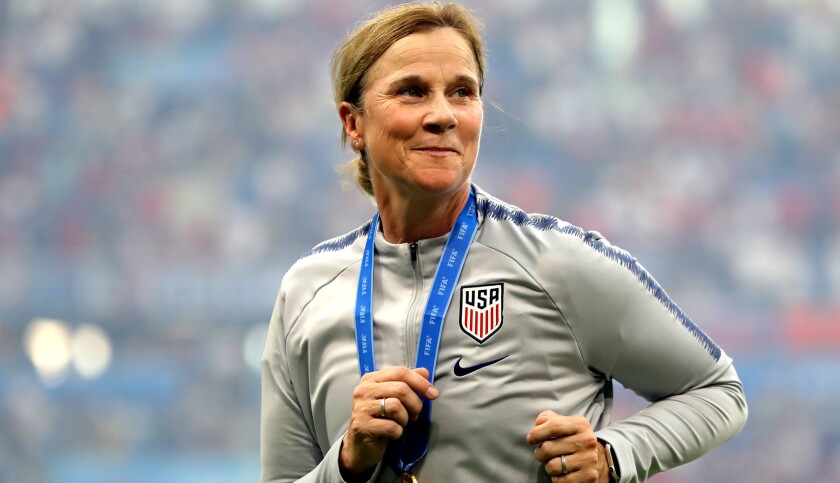 Before Jill Ellis was a two-time World Cup-winning coach with the U.S. national team, she ran the women’s soccer program at UCLA. And it’s clear in her mind she wouldn’t have accomplished that first thing without enduring the second.

“From the time I entered UCLA to the time I departed, I really grew as a coach. There’s just so many good experiences here,” she said during a return visit to campus this past week. “I credit a lot of my preparation for the national team to being around incredible people here at UCLA.”

The school rewarded Ellis again on Friday by inducting her into its Athletics Hall of Fame, enshrining her alongside the likes of John Wooden, Sigi Schmid, Kareem Abdul-Jabbar, Arthur Ashe and Jackie Robinson.

“Everything about this place, it did validate for me this is the level I want to work at in terms of working with highly motivated people and players,” she said. “To be on that wall, it’s a tremendous honor, [but] a little bit surreal because UCLA — it’s an all-star who’s who in terms of coaching and athletes.”

Ellis earned her place in that group by going 229-45-14 in her 12 seasons at UCLA, becoming the winningest coach in the program’s history. She made the final 16 of the NCAA tournament every year, reaching the final four eight times.

Yet for all that winning the most valuable lesson Ellis learned at UCLA was how to lose, because every one of her seasons there ended in defeat.

“The cornerstone for success for me has been struggle and hardship.”

Building on that foundation, Ellis went on to change the face of women’s soccer in the U.S. In 5½ years with the national team, she coached a record 132 games, winning 106 of them — also a record.

Her teams put together unbeaten streaks of 24, 26, 28 and 21 games and lost consecutive games just once.

It wasn’t all rainbows and butterflies, though. After losing to Sweden on penalty kicks in the quarterfinals of the 2016 Olympics — the earliest the U.S. has bowed out of an Olympic tournament — Ellis decided to blow up her aging roster, and over the next couple of years she auditioned more than 60 players.

That led to World Cup spots for Abby Dahlkemper, Tierna Davidson, Adrianna Franch, Rose Lavelle and Jessica McDonald. But it didn’t sit well with some veterans, who attempted to overthrow the coach in a coup in early 2017. U.S. Soccer backed Ellis, the rebellion was quickly put down and, two years later, the World Cup victory in France gave the U.S. four titles in eight tournaments and made Ellis just the second coach in history to win two world championships.

She didn’t lose a game in either tournament.

So with nothing left to accomplish, Ellis stepped down as coach last month. At 53, this isn’t retirement, though; it’s more of a pause, a chance to reflect and reenergize before deciding what comes next.

“I haven’t eliminated anything in terms of what possibilities there are,” she said. “Opportunity and challenge is what I enjoy. And whatever that will be is intriguing to me.”

In the meantime, she’s serving as a goodwill ambassador for U.S. Soccer, glad-handing sponsors and supporters and pushing to broaden the pool of women coaching candidates. When former Seattle Reign manager Vlatko Andonovski was named as Ellis’ replacement last week, he became the ninth women’s national team coach and the sixth male to lead the team.

Sixteen of the 24 teams in last summer’s Women’s World Cup were coached by men. And that percentage won’t change unless there are more qualified women to compete for those jobs.

“You have to take a multipronged approach to getting more females in coaching,” Ellis said. “You try to do it in representation, meaning being a female leader in coaching. That helps young females see it’s a possibility.”

You also do it by creating opportunities. When Ellis graduated from college and wanted to take her first classes toward a coaching license, she didn’t have the $1,000 to enroll. So she borrowed the money from her English-born parents, which may have been the most important loan the U.K. has ever made to the U.S.

Ellis wants to make sure money no longer determines who gets into coaching. One way that will happen is through the Jill Ellis Scholarship, the first-ever scholarship endowed by the U.S. Soccer Federation to grow the ranks of women in coaching.

“You just kind of want to break down barriers to allow it to be an opportunity for all,” Ellis said.

She is also partnering with the federation on a program that will allow current NWSL players to take the seven-week, C-level coaching license course for free. The second seven-player class will end the opening stage of their studies on Sunday at the National Development Center in Kansas City, Kan.

Someday, Ellis hopes, one of those women will go on to break all her records. And if that happens she said that will represent her biggest victory.

“Trophies and titles, they have a shelf life,” she said. “To help a young person get into coaching or find their passion, that would be a phenomenal gift to pay it forward.

“It doesn’t matter how many wins or loses you come out with. It’s really about trying to change the game and make the game better for people to play and enjoy.”

What more could you want from a Hall of Famer?