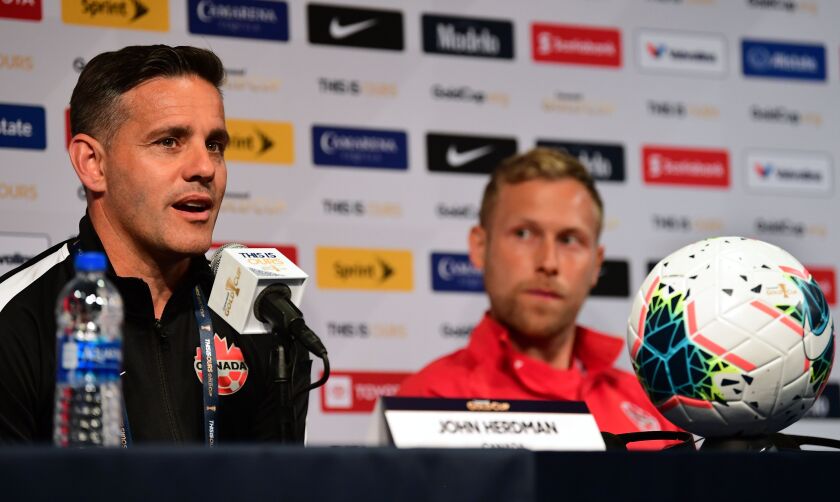 The most important man in Canadian soccer isn’t even Canadian. But if John Herdman achieves his quixotic goal and qualifies the country for the next World Cup, they might just add a statue of him next to the one of hockey star Mats Sundin along Legends Row in Toronto.

Oh, and while we’re on the topic of hockey, it’s no longer the most popular team sport for kids in Canada. Soccer is. And you can probably give Herdman, the coach and director of the Canadian national team, some credit for that too.

Since coming to Canada eight years ago, Herdman, who began pursuit of his first coaching license in his native England at age 16, has turned the women’s program into an international power and, Friday’s Nations League loss to the U.S. notwithstanding, has the men’s team in position to claim its own spot on the world stage.

“Everybody’s starting to appreciate what a good team we have,” captain Scott Arfield said. “Certainly since the manager’s come into the program we’ve believed in him. And every camp we get stronger.”

Friday’s loss, which came exactly one month after Canada’s first win over the U.S. in 34 years, stalled the momentum of a 10-2 start under Herdman that had lifted Canada to 69th in the FIFA world rankings, 25 spots better than when Herdman took over in the winter of 2018.

More important, Canada is now ranked sixth in CONCACAF. In the region’s new World Cup qualifying format, there is a six-team field for the hexagonal round of qualifying is set in June.

“We want to take this country to a World Cup,” Herdman, an enthusiastic and boyish 44-year-old, said of a tournament Canada has played in just once, in 1986, when it failed to score in three straight losses.

“Every kid in the world dreams about going to the World Cup. And there’s probably only seven or eight games left before those decisions are made.”

The loss to the U.S. will cost Canada valuable points in the complicated FIFA rating system, points it will have to win back in the March and June international windows by playing — and beating — higher-ranked teams. That Canada is in the qualifying conversation at all is a big step forward.

How it got there is a complicated story that dates to 2002 and includes two U-20 World Cups, a Women’s World Cup and an MLS expansion franchise in Toronto.

Ahead of the U-20 World Cup Canada staged in 2007, government officials in Toronto spent $75 million to build BMO Field, the country’s first soccer-specific stadium. It is now home to the city’s MLS team, the first to come to Canada, marking a major turning point in the country’s investment in soccer.

Four years later, Canada won the rights to stage the 2015 Women’s World Cup, an honor it marked by finishing last in that summer’s world championships. So the team went out and hired Herdman, who had guided New Zealand’s women to three major international tournaments.

A year later, Canada took the top-ranked U.S. women to extra time in an Olympic semifinal before settling for the first of two consecutive bronze medals.

Under Herdman, the Canadian women also made the quarterfinals of the World Cup it hosted and rose to fourth in the FIFA rankings. So 22 months ago, with Canada joining the U.S. and Mexico is an ultimately successful bid to stage the 2026 men’s World Cup, the coach was asked to turn around a men’s program that consistently lagged behind countries including Honduras, Albania and North Macedonia.

“I knew he was a winner,” defender Richie Laryea said. “Him coming in here, a lot of guys thought he’d do some really good things. And he has.”

Herdman has not turned Canada into a soccer country yet, but it’s trending that way. The country’s federation says there are more than 865,000 registered soccer players in Canada, twice the number of people registered to play hockey.

Asked why it has taken a country with a rich sporting tradition so long to adopt the world’s game, forward Jonathan David shrugged.

“That’s a question we’ll never know the answer to,” he said. “[But] now that we have a great group of young guys coming in, if we continue going this way there’s no reason why we can’t compete with the best in the world.”

David, a 19-year-old who has 11 goals in 12 games with the national team, is part of that “great group of young guys” that includes LAFC midfielder Mark-Anthony Kaye, teenage forward Liam Millar and winger Alphonso Davies, who made his Champions League debut with Bayern Munich four days after his 19th birthday.

The foundation for Canada’s success was built while Herdman was still coaching the women. Tony Fonseca, Canada Soccer’s former high performance director, began working on the players, introducing a more challenging and sophisticated style to the youth national teams. Next, the country’s three MLS teams — in Montreal, Toronto and Vancouver — established thriving academies while the recent advent of the seven-team Canadian Premier League has provided a competitive environment for nearly 200 other players.

Herdman brought all those pieces together, using a program he established with the women’s team to coordinate work being done across a continent-sized country he has found difficult to manage. And now Canada is talking realistically about a World Cup qualifying run for the first time in more than a generation.

“These are the moments now where, if we turn this around, what a hell of a story this is going to be,” Herdman said. “It’s like a football fairy tale.”