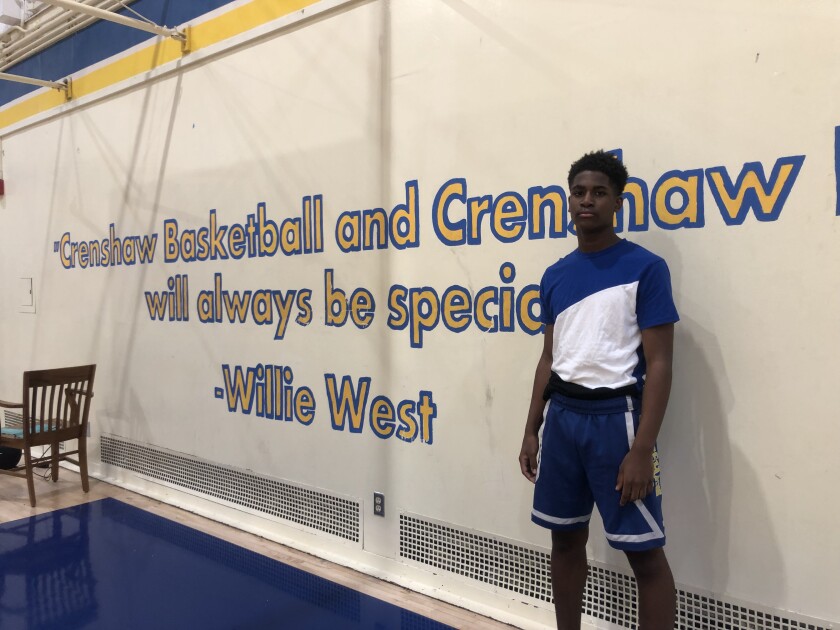 Column: KJ Bradley is continuing the basketball tradition at Crenshaw

When you walk into Willie West Jr. Pavilion at Crenshaw High and see the 18 City Section and eight state championship banners on display, it feels as if you’ve entered a basketball Hall of Fame. The sports history is astounding.

Sixteen of the City titles and all eight state titles were achieved during the Willie West coaching era, the last coming in 1997. The list of past Crenshaw greats goes on and on: Marques Johnson, Michael Johnson, John Williams, Stephen Thompson, Gary Maloncon, Terry Cannon, Kris Johnson, Kevin Bradley. All were City players of the year.

KJ Bradley, the son of Kevin, was firing up three-pointers during a practice session last week. The City championship banners from 1996 and 1997 were hanging on the wall. Those were the years his father played.

Averaging 24.7 points in his junior season, the 5-foot-11 point guard is continuing a Crenshaw tradition of producing some of Los Angeles’ finest basketball players.

Bradley loves to work on his shot. During Thanksgiving week, he said he went to a park at 4 a.m. to practice.

Asked what it’s like to practice shooting at 4 a.m. under the lights at a public park, Bradley said, “The first 10 minutes you keep looking around. After that, you put the headphones on.”

Bradley still is looking for trash-talking material to challenge his father, a two-time City player of the year who won two City championships.

He said there’s old video of his father from his Crenshaw days, when teams applied full-court defensive pressure, crowds were loud and passing was precise.

“Everybody played together,” he said.

Waters said Bradley is making good progress toward becoming one of the top players in the City Section.

“KJ is one who comes from great pedigree with his father,” he said. “We think he has a lot of potential to be a real good point guard like his dad. He’s shown he can score from all areas on the court and get to the basket. Moving forward, it’s about developing him as a leader.”

Crenshaw has already produced one father-son MVP duo in Marques and Kris Johnson. There’s still time for the Bradleys to join them.

“I work hard every day to become better,” he said. “I’m always in attack mode.”

“It was definitely fun,” Bradley said. “At the beginning he was hard on me.”

Playing basketball is what he looks forward to every day.

Bradley looks up at the banners and says, “What I think about is, I want one.”