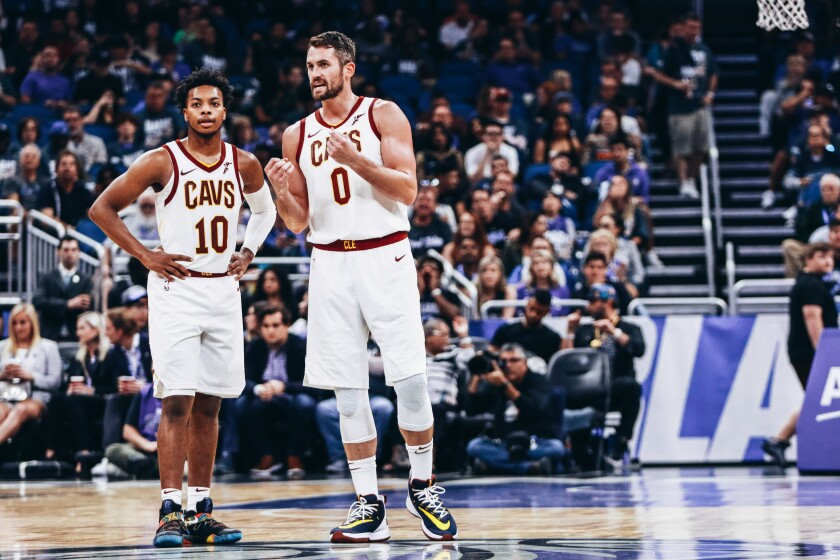 Column: Kevin Love opens up about mental health, being traded and LeBron James

Kevin Love’s place on the Cleveland Cavaliers hit him suddenly last week as he sat in the trainer’s room, flipping through the team’s game notes.

“It’s weird,” Love said as he drove home from a shootaround. “I was getting some treatment after practice and I was in there with Matthew Dellavedova and I was looking through our lineup on paper and I said, ‘ I’m the oldest guy on the team.’ I was so used to being in Cleveland with all these savvy veterans, and now I’m the oldest guy.”

Love was traded to Cleveland in 2014 and helped the Cavaliers get to four straight NBA Finals, winning the championship in 2016 with LeBron James and Kyrie Irving, but is the last remaining star from that trio.

After the departures of James and Irving, Love became the face of the franchise when he signed a four-year, $120-million contract extension last year. Cleveland, however, is a rebuilding team and there has been talk Love could be dealt to a team looking to make a championship push.

“I know there’s talk about me possibly being the missing piece somewhere,” Love said. “There’s been constant chatter since I signed that I could be traded. It’s one of those things where I’m going to keep doing right by the team, by Cleveland and by the organization. If my number is called, so be it, but I’m going to stay true to my commitment and let the chips fall where they may.”

As Love talks about his uncertain future in Cleveland, he lets out a sigh before he continues.

“A big aspect of mental health is just staying in the present but it’s so hard,” he said. “You have to try to not get too far ahead of yourself or get worked up. You can get that anxious feeling or fear for the future, but you have to try to stay focused on getting better and let things work out the way they should.”

There was a time when Love might have allowed trade talks and the stress that comes with the rumors to get the better of him. That was before he opened up last year about his battles with mental illness and his first panic attack, on Nov. 5, 2017, during a game against the Atlanta Hawks.

“I think I just came to a point in my life where so many things had led up to that moment and some people were talking about what I was dealing with and I didn’t want anyone to tell my story but me,” Love said. “I had been dealing with anxiety and depression and I felt I needed to speak my truth and allow myself to be vulnerable to the masses. I didn’t know how it was going to be received and how it was going to be moving forward. I just knew that I was done suffering silently and maybe I could help that one kid out there who was in need.”

Love, who was born in Santa Monica and went to UCLA, has done more than help one kid since going public. Last year, the Kevin Love Fund donated subscriptions to Headspace, a meditation app, and in-person mental training sessions for all UCLA student-athletes and coaches, which covered 700 students and 150 coaches. This week, Love was awarded the October NBA Cares Community Assist Award by Kaiser Permanente after he hosted a mental wellness session for more than 500 Cavs and Rocket Mortgage FieldHouse employees and gave them the same meditation app.

“It was after my panic attack and going to see a therapist that led me to talk about everything that I’ve dealt with over time,” Love said. “The biggest thing was the grieving for my grandmother and never really allowing myself to go through that process because I had to put it away and just deal with basketball because there’s no life outside of basketball. You just have to bury your emotions and that’s what’s expected of you. That was something that really opened me up to sharing myself and allowing me to settle myself and open up and share who I am and what I deal with on a daily basis.

“That’s what led me to share my story, which led me to seeing what a vast community there is out there, which lead me to create my own fund and doing so much research and continuing to absorb all the information out there and paying it forward. I realize I have a great opportunity to help people.”

Love will not return to Los Angeles until Jan 13, when the Cavaliers will take on James and the Lakers, but he is keeping close tabs on his old teammate in his old city.

“They’re meshing in a real good way, and Kyle Kuzma is figuring out his role now too,” Love said. “Once he gets up to speed and other guys get up to speed, they’re really going to be rolling and they’re already clicking as it is with LeBron and [Anthony Davis]. Dwight [Howard] has really played well too. They’re a fun team to watch. Any team with LeBron is going to be a fun team to watch, but he’s leading them and he has been super efficient. There are nights where he’s going to have 30, 15 and 15 and then there’s nights where he’s going to play at his own pace and not put up those numbers, but he’s just so efficient. It doesn’t look like he’s lost a step as he gets older in this league. He continues to get smarter and find ways to make everything work.”

Love was a 25-year-old, three-time All-Star averaging 26.1 points and 12.5 rebounds in Minnesota when he was traded to Cleveland to be the third piece of the Cavaliers’ Big Three. While Kuzma isn’t at that level, Love believes Kuzma’s ability to adapt to his third-man role on the Lakers — as Love was able to in Cleveland — will be a big key to the Lakers’ success this season.

“The key with being that third guy is taking advantage of the opportunity,” Love said. “When you’re the third guy, you know you’re going to sacrifice. When I got to Cleveland I joined two ball-dominant guys, so I had to find where I fit. I had to master my role on the team and know that I had to do other things that didn’t show up on the stat sheet.

“When you have a chance to win a championship, there’s going to be some sacrifice.”