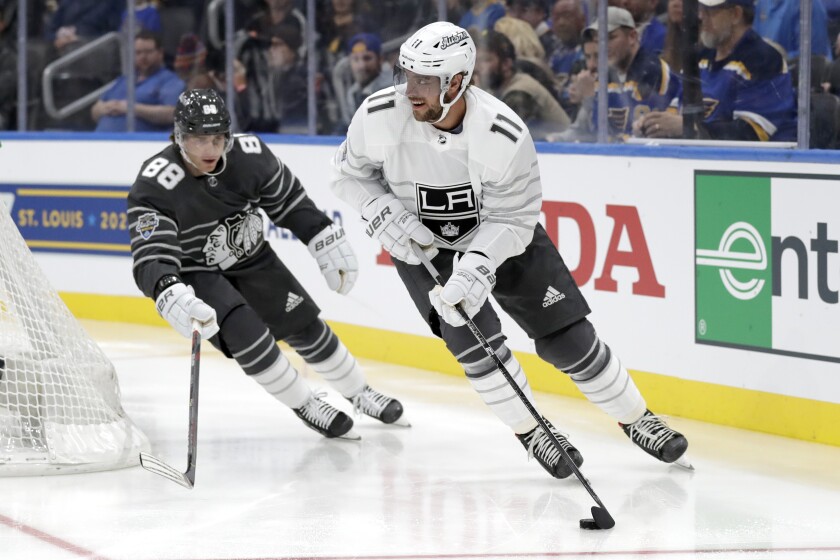 Kings center Anze Kopitar was as excited as a little kid as he held out his All-Star jersey to get the autograph of next-locker neighbor Tomas Hertl of San Jose.

They’re enemies during the NHL season but became buddies this weekend, a friendship cemented by their excellence in leading the Pacific Division to a 5-4 victory over the Atlantic in the finale of the three-on-three All-Star tournament at Enterprise Center. In the spirit of camaraderie, Hertl was happy to grant Kopitar’s request.

“Before, seven years we hate each other, but now we hang out, so it’s all good,” said the Czech-born Hertl, who scored the winner with 2:36 to play to secure the triumph and the $1-million payoff the victors will share.

It’s not often that Kopitar is surrounded by elite finishers and he thrived in that circumstance Saturday, producing three assists in the Pacific team’s 10-5 opening victory over the Central Division and one assist in the finale. Hertl had four goals in the first game, three set up by Kopitar. Their bromance will survive long after the details of this sort-of-hockey exhibition is forgotten.

“If you don’t know him you can’t really like him because he’s in San Jose, which now is definitely not the case,” Kopitar said. “I got to know him a little bit first on the [NHL] media tour in Chicago. Very nice, classy man. It’s going to be hard to hate him again, but at the same point we’ll find a way and have some laughs afterward.”

Hockey doesn’t easily lend itself to All-Star contests, where the only hits are accidental and shot-blocking and backchecking take a vacation. The NHL has experimented with several formats in hopes of keeping fans and players interested, settling on the division-based mini-tournament and sticking with it this year for the fifth time. Players don’t exert themselves much in a game that means so little, which makes sense, but without intensity or physicality it’s more a scramble than hockey.

Commissioner Gary Bettman said here the league might change the format next year to feature an international angle. Still, this format has support. “You’ve got to at least somewhat try or you’ll get embarrassed,” said Ryan O’Reilly of the hometown Blues. “I think they do a good job and it’s fun for people.”

Players seem to enjoy the open ice and the chance to make outstanding goaltenders look bad. “I think guys have fun three-on-three,” scoring leader Connor McDavid said, “especially when you put a couple bucks on the line.”

Leon Draisaitl, McDavid’s Edmonton teammate, insisted players were driven by pride. “I’m not here to just think about the money,” Draisaitl said. “It’s a nice thing to take home with you, that’s no secret, but we’re not here to hurt ourselves just for the money. If you’re in the situation you want to try and win it. That’s our nature. That’s the competitive nature. It was fun.”

The Atlantic Division team defeated the Metropolitan 9-5 in the first game, with Boston’s David Pastrnak and Ottawa’s Anthony Duclair each contributing three goals and four points. Pastrnak had a goal and an assist in the finale and was voted the most valuable player. He got a car but mourned losing a share of the jackpot. “It was fun,” he said. “Unfortunately I was on the losing side.”

The hometown St. Louis Blues, who had four players on the Central team, took the loss in stride. They’ve had an extraordinary year, rising from last overall early last January to winning their first Stanley Cup in June. “It’s just been one heck of a story for the city,” defenseman Alex Pietrangelo said. “It would have been fun to have won, but for me, just being here in front of the crowd with these guys was pretty fun.”

Teams that had their bye week before the All-Star game will resume real play this week. As Kopitar prepared to return to Los Angeles he held on to that jersey, which he plans to keep for himself instead of giving to his young son and daughter. “Just a nice memory I guess,” he said.

That’s the best possible outcome in this situation: no injuries and no regrets, and a few bucks.