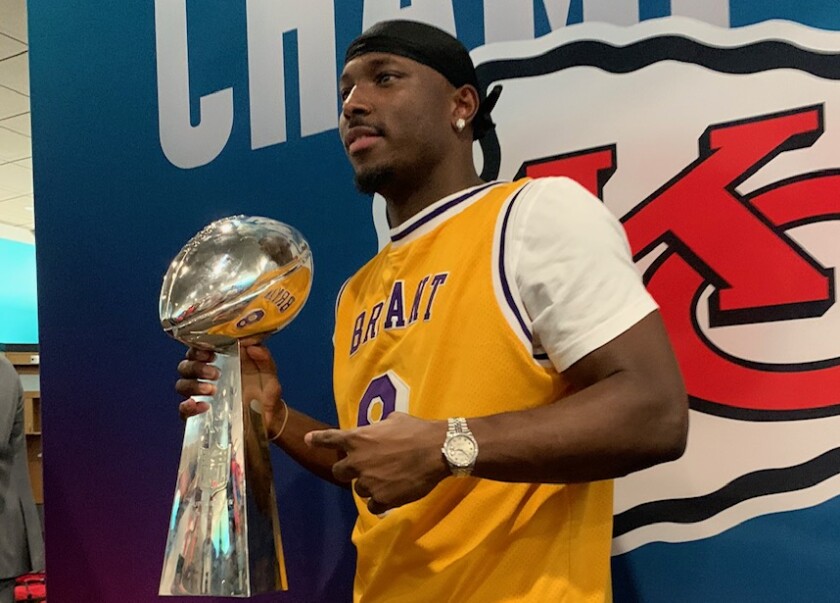 When Kansas City Chiefs running back LeSean McCoy returned to his locker after Super Bowl LIV, he looked at the hanging No. 8 Kobe Bryant jersey next to his jeans and smiled.

“I just want to honor him,” McCoy said. “When I was a kid, he inspired me. In my neighborhood and in my city, he was a hero. This is just to show love for him. I pray for his family, his wife and his daughters. He was special. He touched so many people. I have a lot of love for him. I lost a friend, a mentor and I lost a role model.”

Across the celebrating locker room, defensive end Frank Clark, who is from Los Angeles, was putting on a No. 24 Bryant jersey.

“That’s my one and only idol,” he said. “Kobe meant everything to me. I looked up to him more than anybody.”

Bryant was one of the greatest basketball players but his popularity and impact transcended the sport. As the Chiefs and San Francisco 49ers were flying to Miami on Jan. 26 to play in the Super Bowl, they heard the news that Bryant, his daughter Gianna and seven others were killed in a helicopter crash.

“It took a lot of joy out of this trip, to be honest,” McCoy said. “I was on the plane and Pat [Mahomes] showed me the report from TMZ that Kobe had passed and it was emotional. We were all in disbelief. I still can’t believe it.”

LeSean McCoy on wearing a Kobe Bryant jersey to the Super Bowl. pic.twitter.com/8j9e3ly5y5

He first met Bryant in 2011 when McCoy was a running back for the Philadelphia Eagles. Bryant, who was born in Philadelphia, was a big Eagles fan and acknowledged McCoy before he could introduce himself.

“I saw him at a basketball game and he called me ‘Shifty Shady,’ ” McCoy said. “I remember texting my mom and telling her, ‘Kobe knows who I am!’ ”

“I was at a Lakers game six years ago, sitting front row against the Celtics and he came running by and said, “Gronk! Gronk!’ ” said former New England Patriots tight end Rob Gronkowski. “I was 23 and my eyes just lit up. My dad was sitting next to me and I turned to him and I said, ‘Dad, Kobe just said my name.’ It just put a big smile on my face.”

Rob Gronkowski was a big Kobe Bryant fan and he’ll never forget sitting courtside at a Lakers-Celtics game and hearing Kobe yell, “Gronk!” His eyes lit up and he turned to his dad and said, “Kobe just said my name!” pic.twitter.com/FUPNuYHrrN

Bryant spoke to the Patriots in 2018 before their Super Bowl season as he and Patriots coach Bill Belichick developed a friendship. Belichick said he had never seen a group as captivated as when Bryant addressed his team.

“Belichick became really close with Kobe,” said former Patriots defensive end Willie McGinest. “That’s why he had him speak to the team. That’s how much he thought of him motivating and inspiring the team.”

Since he retired in 2016, Bryant spoke to several NFL teams. He addressed the Chargers a couple of times. His offices were next to the team’s headquarters in Costa Mesa. He also talked to the Eagles when they were on the West Coast to play the Rams and Seattle Seahawks during their Super Bowl season. He told the Eagles that his goal on the court was to make his opponent second guess their career choice. He wanted his favorite football team to adopt that same mind-set.

“He talked about his mentality and he gave us some words of encouragement,” said Eagles safety Malcolm Jenkins. “He was inspiring. The conversations about Kobe right now are less about what he did on the court and more about what he did as a person and as a father.”

Bryant relished the opportunity to be a role model for athletes, regardless of the sport. He met DeAngelo Hall when the cornerback was with the Washington Redskins and Bryant was in Philadelphia to watch the Eagles play the Redskins. They exchanged numbers.

Five years later, when Hall tore an Achilles tendon against the Eagles in 2014 — one year after Bryant suffered the same injury — Bryant was ready to help.

“I was on the plane and my first reaction was to call him so I called Kobe on the plane before we took off,” Hall said, “I said, ‘Bro, who did your surgery? I got to get back. I can’t end it like this.’

“He started talking me through the whole process of what he did. To have a guy I look up to reach out like that was motivating. To have a person like that tell me that they believed in me was inspiring. He gave me that Mamba magic. His words inspired me.”

Bryant died flying to the Mamba Sports Academy, a training facility he opened in Thousand Oaks for professional athletes and youths. Los Angeles Rams All-Pro defensive tackle Aaron Donald went there several times and cherished learning from the best, as many football players did.

“Even though I played football growing up, you gravitate towards greatness,” Donald said. “You try to imitate that and the success he had and you try to do that in your sport. As an athlete he already had the platform and then he did so many great things off the court and people gravitated towards him. He touched a lot of people.”

Aaron Donald trained at Kobe Bryant’s Mamba Sports Academy in Thousand Oaks multiple times. “You gravitate to greatness and you try to imitate that.” pic.twitter.com/CsGEa3TpBK