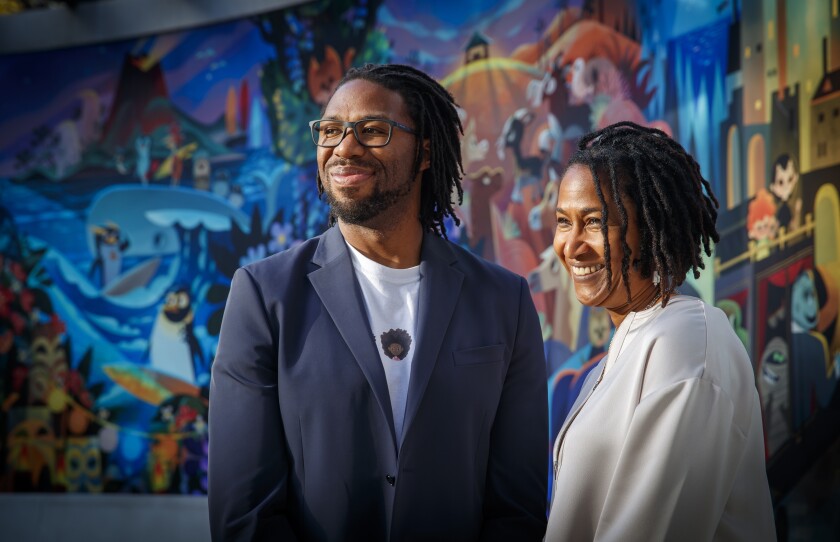 For all of the drawbacks one can point to regarding our oversharing society, one benefit is that it makes rewriting one’s history tough. The internet has receipts, so whatever you posted yesterday probably will follow you for the rest of your tomorrows.

Now admittedly that sounds a bit ominous — like the plot of a B-rated horror movie — but in the case of Matthew A. Cherry, it’s a passage from his fairy tale.

On June 1, 2012 the former NFL wide receiver tweeted: “I’m gonna be nominated for an Oscar one day. Already claiming it”.

The morning of January 13, 2020 the Undefeated’s Kelley L Carter tweeted:

⁦so ⁦@MatthewACherry⁩ becomes the second former professional athlete — after ⁦@kobebryant — to be nominated for an Oscar. In the same category too. Congrats Matt! ⁩#OscarNoms https://t.co/WW4Yl4OhzA

He also retweeted the video of Cherry, surrounded by family and friends, jumping for joy the moment his animated short, “Hair Love,” was announced.

“It’s so wild because when Kobe won [for “Dear Basketball” in 2018] it really inspired me, so when he gave me a shoutout I was just floored,” Cherry said. “Now that he’s gone, I hope I can continue his legacy … and inspire other athletes to excel in their second career.”

Whereas “Dear Basketball” is a love letter to the game that had given Bryant so much, Cherry’s film is not directly tied to sports at all. Instead it chronicles the journey of a black father trying to style his young daughter’s natural hair while mom is away.

Fitting that one of Bryant’s last tweets would place the spotlight on a film featuring a #girldad. And though Cherry doesn’t have any children, he said it was important to him to challenge the stereotypes some people hold about black fathers, such as not being there for their children.

Cherry, who was undrafted after an all-conference career at Akron, had stints with the Jacksonville Jaguars, Baltimore Ravens, Carolina Panthers and Cincinnati Bengals before deciding to retire in 2007 at 25 to pursue a career in film.

In 2012, the year he posted his Oscar-nomination prophesy, he made his first feature film as a writer-director with “The Last Fall.” He also directed music videos, having worked with Beyonce, Michelle Williams, Kelly Rowland and Snoop Dogg.

“Funny thing is, I get recognized more for being a former football player than I did when I actually played,” Cherry said.

Of course, former athletes being involved in the movie and television industry has been going on for decades.

Four-time Pro Bowler Alex Karras has an impressive list of characters he’s portrayed in the years following his time in the NFL, including George Papadapolis, the adoptive father of the beloved TV character Webster.

Carl Weathers played for the Oakland Raiders before he was Apollo Creed or seen in the Star Wars series “The Mandalorian”, while Arnold Schwarzenegger and the Rock became international superstars after professional body building and wrestling.

There are, however, a couple of differences for Bryant and Cherry. First, they achieved Academy Award recognition, which signifies a high level of industry acceptance, and second, they did so working behind the camera.

“Dear Basketball” stemmed from a poem Bryant wrote while “Hair Love” is based on the children’s book Cherry penned by the same name.

“Unlike the generation before who maybe just wrote a check to get involved, this generation of guys are taking the same discipline that made them professional athletes and are applying it to producing content,” said Carter, who has covered the entertainment industry for more than 20 years and spoke to Bryant about his interest in Hollywood. “They are engaged in the entire process.

“Drew Brees is someone who is producing films and not just writing checks. On his off days he is sitting in boardrooms and making decisions. KG [Kevin Garnett] has a nice slate. Steph Curry and LeBron James have a slate that is as impressive as any top Hollywood producer.”

In fact, while Cherry is personally nominated for an Oscar, one of Curry’s projects, “Breakthrough,” produced a Best Original Song nomination.

“Kobe told me he really wanted to break into TV,” Carter said. “He wanted to be the Shonda Rhimes of creating basketball content, both scripted and unscripted. That’s one of the saddest parts about his death … we won’t get to see all of the incredible things he had planned. He was charting the path for other athletes to be taken seriously in this space. He was proving you truly can be more than an athlete and a lot were inspired by him.”

Like Cherry, who since the NFL has found a home as an executive for Oscar-winner Jordan Peele’s Monkeypaw Production. He recruited Emmy-nominated actress Issa Rae to be the voice of the mother for “Hair Love,” which made the Oscar nomination even more sweet because Rae was the person who revealed the achievement during the broadcast he was watching.

“Natural hair is unapologetically black,” Cherry said. “It’s important to see that on the screen because if all you see are people with skin that’s not like yours and hair that is not like yours, young black kids wonder if they are beautiful. I wanted to do something that made people feel good about themselves.”

To further drive this point home Friday, Cherry tweeted “Since Deandre Arnold’s school didn’t want to let him walk at his graduation because of his hair we figured that he should walk with us on the red carpet at the #Oscars as our special guest.”

Arnold is the young man from Texas who was told he had to cut his dreadlocks in order to cross the stage for graduation. The school cited its dress code policy as the reason why, though it’s important to note the policy was created after Arnold grew his hair.

His story attracted nationwide outrage and is precisely why Cherry’s “Hair Love” is so necessary. Dwyane Wade and Gabrielle Union, who serve as associate producers on the short, joined Cherry in a video inviting Arnold to the ceremony.

“When we heard about this amazing story of a young, black father with long, beautiful locks just trying to figure out how to do his daughter’s hair, we knew that we had to support any way we could,” Union said in the video.

You may recall Union was fired from “America’s Got Talent” in part because her hair was “too black.”

“The thing that’s crazy is Kobe won an Oscar for his retirement video,” Cherry said. “Imagine what he would’ve done with more time. It’s so sad … but I’m going to do everything I can to tell amazing stories that empower and lift people up. I’m going to try my best to keep that part of his legacy going.”