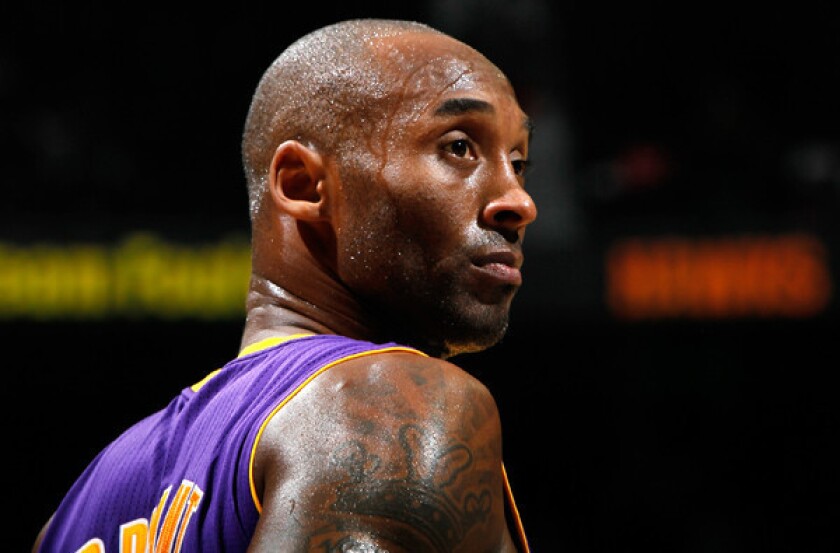 Column: Kobe Bryant’s reaction when I cursed him on TV showed the real Kobe, as he always did

It was in the first round of the 2012 playoffs, the Lakers were in Denver, and I couldn’t take it anymore.

I couldn’t bear one more moment of listening to that smug Kobe Bryant.

Asked about the defense being played on him by the Nuggets’ Danilo Gallinari during a postgame news conference, Bryant filled the small media room with dripping sarcasm.

He smiled, shook his head, and said something like, oh yeah, he was real worried, truly bothered, so stressed ...

And I lost it.

“Kobe, you’re such an asshole!” I yelled at him.

A couple of writers chuckled. A couple of others gasped. I immediately regretted the outburst. Bryant stood up and left the room with a funny look, as if he wasn’t sure exactly what I said.

But television microphones picked up my words and broadcast them worldwide. The next day, Bryant approached me at practice. By then, he knew exactly what I said. He just couldn’t believe it.

“Hey, bro, last night, did you really call me an asshole on national television?”

He stared down at me. I thought he was going to take a swing. Instead he just sort of laughed.

“Isn’t that like the pot calling the kettle black?”

For 20 years, I fawned over his ability while ripping his selfishness. I marveled at his Mamba Mentality on the court yet lamented the way it consumed him in real life.

We would often connect during slow postgame walks to his car, when he would confide about the the burdens of his competitiveness. Yet, there were also many times when he would regard me with nothing more than an icy stare, usually because he was angry I had written about how that competitiveness prevented him from empowering teammates.

For most of two decades, it seemed as if his entire life was taking place in the fourth quarter with the game on the line. He was constantly demanding the ball, demanding loyalty, demanding excellence, and could be ruthless when he didn’t get it.

Bryant once used a sock-clad toe to draw an imaginary line in front of his locker.

“This is my circle of trust. Either you’re in or your out,” he said.

At that moment, no doubt, I was out. Way out. But a month later, for no reason, he would look over a scrum of reporters, catch my eye, and the freeze would thaw.

I wrote 667 articles for the Times involving Bryant, and they are as varied as our interactions, swinging wildly from praise to criticism, from awe to disgust. That was his uneven journey, and it became our journey, and perhaps that is why Bryant’s death in a helicopter crash struck such a devastating chord for so many different people.

Loved or loathed, Bryant is being mourned so deeply because he was real. For two decades we had a front-row seat to a real human being enduring both real struggles and triumphs without airbrush or Photoshop. We saw it all, 24 years of a life that became our life, from the cocky 17-year-old kid dancing around the Forum to Sunday’s horrific smoldering wreckage on a Calabasas hillside.

He grew up in front of our eyes, bathed by both stardom and scars, and the view was breathtaking. He was complicated, he was flawed, he was strange, but he was unforgivingly, unrelentingly real.

He threw up four air balls in final minutes of his first playoff run and didn’t apologize for a single one. He was 18. I remember talking to him that night in Utah and thinking, who is this kid? This was real.

He and Shaquille O’Neal won three championships even though they disliked each other so much reporters had to pick sides to ensure good interviews. I was a Shaq guy. Shaq was fun, Kobe was business. Shaq was fantasy, Kobe was real.

In the middle of their championship run, it became more real when I wrote about Bryant’s feud with his parents that existed, in part, he said, because his father was uncomfortable that Vanessa was Latina rather than African American. Bryant called me over one day and said, “I love my wife more than anything, I owe her everything, I will never turn my back on her for anything.”

Yet, soon thereafter, in July 2003, I witnessed the oddest news conference in Staples Center history, when Bryant chose to explain the sexual assault charge he faced in Colorado by announcing that he had cheated on his wife.

He cried as he said he was “furious at myself, disgusted at myself for making the mistake of adultery.”

Devotion one minute, betrayal the next. A 20-something young man melting down in full public view. It was gross, but it was real.

I called him shortly after the charge was filed. He pleaded over the phone: “You guys know me!”

But we didn’t know him. He spent the rest of his life being punished in the court of public opinion for the sexual assault charge, which was dismissed when the alleged victim refused to testify.

He dealt with it by changing his number, inking his biceps and suddenly acting like a B-movie tough guy.

“I don’t care what anybody thinks about me anymore,” he told me shortly after the incident. “The hell with everyone else, you know what I’m saying?”

He eventually broke up with O’Neal and, a couple of years later, demanded a trade if the Lakers didn’t improve their roster. I ripped him for that. He ripped me back.

“You have no idea what I’m doing,” he scolded.

I didn’t. The Lakers traded for Pau Gasol and won two more championships. Bryant was doing it his way, the hell with everyone else, and his solo streak continued off the court.

Remember that awful “white hot” photo shoot he did with the L.A. Times magazine in 2010 before the Lakers’ final championship? All these photos of Bryant wearing white suits, smocks and scarves? It was a terrible decision and I called him on it.

“Kobe, did you talk to anyone before doing this? Vanessa? Anyone?” I asked.

He was stubborn. He was fighting a world he thought didn’t understand him. Right or wrong, he was real.

Then he slowly began to change. His torn Achilles made him feel vulnerable. The physical difficulties of his comeback made him feel old.

“Do you have any idea what I go through just to play a game?” he told me during one of our walks to his car. “This is killing me.”

It was real pain, but it ended in real glory when he scored 60 points against Utah in the final game of his career. The full effect of his journey was in display through a crowd that cheered every shot, even as he kept shooting, again and again, his trademark ball-hogging overlooked for something sublime.

He earned this farewell. He deserved this good-bye. It was an ending that was true to his spirit. Again, it was real.

“God, I love you guys,” he shouted to the crowd that night.

He did. He loved you guys. He finally had learned to reach out, reach back, connect, and he and his beloved Los Angeles suddenly felt as one.

This metamorphosis continued in my final interview with Bryant 10 days ago, shortly before LeBron James passed him on the NBA’s career scoring list. During our phone call, he rebuffed my efforts to advocate for his legacy and urged fans to support their newest star.

“When LeBron came to Los Angeles, he is now a Laker. He is part of our brotherhood, part of our fraternity, and we should embrace him that way,” he told me.

Think about that. Perhaps the last thing a cocky 17-year-old kid who became a famously selfish superstar said to any reporter was a public anointment of his possible successor.

The journey of Kobe Bryant was complete.