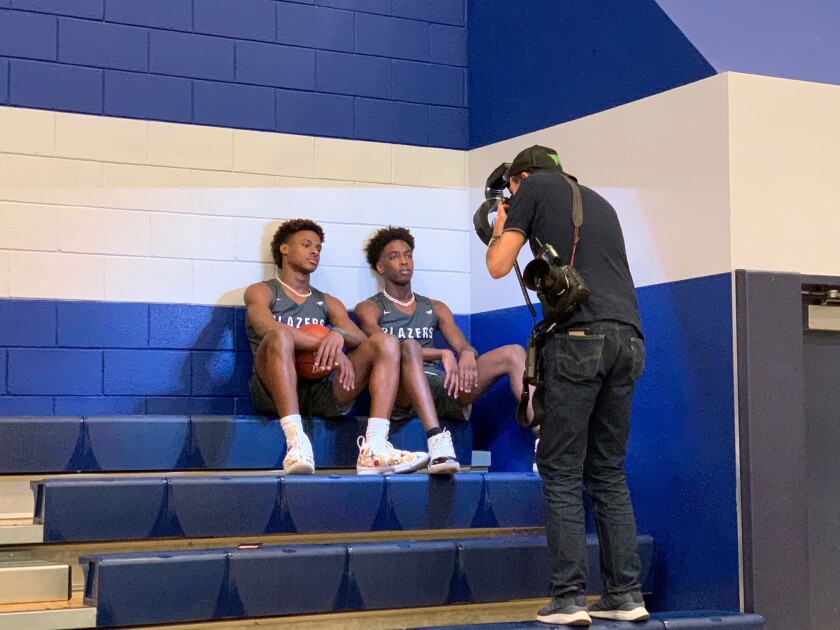 Column: L.A. is now the mecca of high school basketball

High school basketball has become like the California Gold Rush days of the 19th century. By land, sea and now air, players are leaving their hometowns from around the world to seek fame, fortune and college scholarships in Southern California.

Encouraged by their travel team coaches and made comfortable by friendships formed on all-star teams and at camps, players are coming with no hesitation. It’s going to lead to a 2019-20 season that will feature immense individual talent and the usual group of super teams.

Spencer Dinwiddie on basketball Mecca: “I’m from LA listen here..It’s not even close we had Russ, James, Klay may or may not made it but was right there..Kawhi. We put more people on all-nba teams than some states have in the league!” pic.twitter.com/G7ENwVz82u

“We have a ton of talent, and the best want to play against the best,” Lake Balboa Birmingham coach Nick Halic said.

Chatsworth Sierra Canyon, aided by five transfers, certainly has the most high-profile group of players. BJ Boston comes from Massachusetts and is a Kentucky commit. Ziaire Williams, a transfer from Sherman Oaks Notre Dame, won’t be eligible until Dec. 29. He could end up at North Carolina. Then there’s the sons of LeBron James and Dwyane Wade. Bronny James is a freshman now from Brentwood and Zaire Wade is a senior from Florida.

Sierra Canyon is on ESPN networks 15 times during basketball season. The first high school to be a national program. pic.twitter.com/4ZCXhz1GEo

Add TCU-bound Terren Frank, highly regarded Georgia transfer Shy Odom and standout sophomore Amari Bailey, and the only question is whether coach Andre Chevalier can get them to play more for wins than social media fame. ESPN plans to televise 15 Sierra Canyon games on its networks while trying to take advantage of the Trailblazers’ celebrity ties.

As far as overall talent, the top players are clear. Evan Mobley of Temecula Rancho Christian is a 7-foot senior considered by some as the No. 1 player in the nation. He’s headed to USC. Josh Christopher of Lakewood Mayfair is a dynamic, versatile guard who entertains with his dunking skills. Junior Devin Askew of Santa Ana Mater Dei is a Kentucky commit who sets the standard for point guards.

Mater Dei, Etiwanda and Rancho Christian are the three teams most likely to offer competition to Sierra Canyon from the Southern Section. In the City Section, Birmingham, Fairfax, Westchester and Woodland Hills Taft are the teams to watch.

In a continuing trend, every team that has ambitions of winning a state title at the highest level also has a transfer student or two in its lineup. Etiwanda picked up guard Jaylen Clark from Corona Centennial, Rancho Christian gained guard Jayce Catchings from Missouri, Fairfax added 6-6 DJ Dudley from San Ysidro, Westchester picked up guard T.J. Wainwright from Santa Monica, Taft added guard Ramel Lloyd from Calabasas, and Riverside Poly got guard DJ Davis from Centennial.

The fact that LeBron James came to play for the Lakers and Kawhi Leonard is now with the Clippers has helped make Los Angeles even more appealing to gain basketball attention.

“It’s been going on for a long time,” Halic said. “A lot of pros retired here. This is an attractive place. Where else do you get the kind of publicity kids get? I think the market attracts itself.”

The season begins this week. A tournament that should provide an early preview of title contenders will take place at La Verne Damien on Dec. 26-30. Eighty teams are entered.