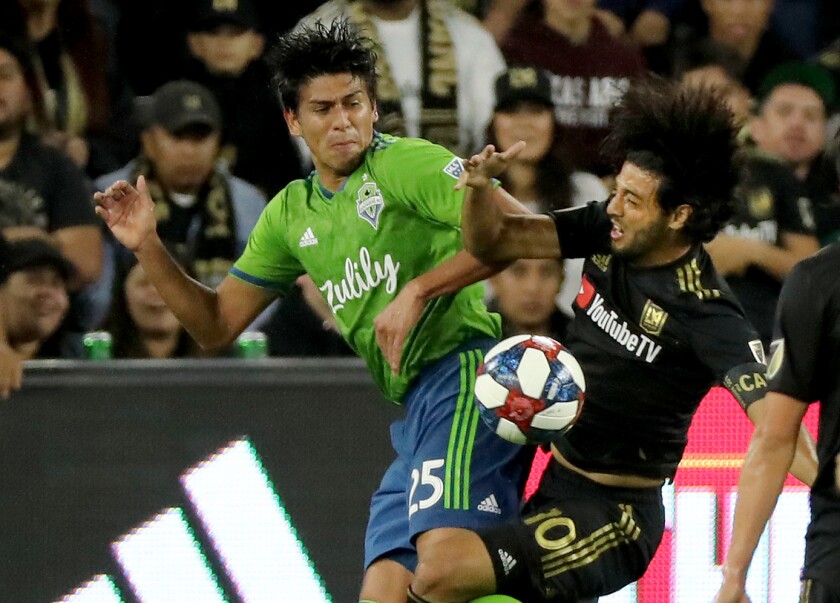 Column: LAFC’s loss to Sounders is the latest playoff choke job by an L.A. sports team

Maybe sucking in the city’s dirty air does something to the teams here.

How else could you explain what happened Tuesday night at Banc of California Stadium?

In a choke job of Kershawian proportions, LAFC dropped a 3-1 decision to the Seattle Sounders in Major League Soccer’s Western Conference championship game.

The greatest regular season in the league’s 24-year history revealed itself to be a tease the size of Exposition Park, as LAFC was denied a place in the MLS Cup by a Sounders team that failed to earn a bye in the opening round of the playoffs and was playing its third game in 11 days.

With a new centrally located stadium and an attractive style of play, LAFC had already replaced the Galaxy as the city’s main soccer attraction. If any questions remained about which team better represented Los Angeles, the Black and Gold answered them by upholding the new civic tradition of dominating in the regular season and freezing when the games really count.

LAFC was the Dodgers in October, the Rams in the Super Bowl.

Asked whether his team’s record-breaking season was diminished by the loss, LAFC coach Bob Bradley replied, “Sure, how can it not?”

Move over, Dave Roberts. Step aside, Sean McVay. You have company.

The enduring image of the Dodgers’ elimination last month was of Clayton Kershaw slumped over on the bench. LAFC’s equivalent was … what?

LAFC forward Carlos Vela, the league’s leading scorer and probable MVP, offered no such memory because he did almost nothing worth remembering. He attempted only one shot.

About the only notable contribution Vela made came in the 17th minute when he stood over a dead ball 25 yards from goal, creating doubts whether the free kick would be taken by the left-footed Vela or right-footed Eduard Atuesta.

The shot was taken by Atuesta, who scored to move LAFC in front 1-0.

The early score was deceiving because the Sounders presented problems for LAFC from the opening whistle.

“They had numbers back. They clogged the middle. They defended in a strong, compact way,” Bradley said.

LAFC nonetheless tried to force the ball through the middle, in part because that’s where Vela was positioned. The team’s most prototypical center forward, Adama Diomande, returned only last week after a month in the league’s Substance Abuse and Behavioral Health Program and presumably didn’t have the conditioning necessary to play 90 minutes.

The failed waves of LAFC attacks created counterattacking opportunities for the Sounders.

The visitors tied the score 1-1 in the 22nd minute when Nicolas Lodeiro moved the ball over to forward Raul Ruidiaz, who danced around LAFC center back Eddie Segura and shot past Tyler Miller.

The 29-year-old from Peru played a role in the Sounders’ go-ahead goal in the 26th minute when he flicked a well-timed pass to Joevin Jones on the right flank. Lodeiro received a pass from Jones at the top of the penalty arc, from where he unleashed a left-footed shot that beat Miller.

Bradley moved Vela wide in the 53rd minute when he replaced winger Brian Rodriguez with Diomande. By this point, the Sounders had little incentive to move forward and were in a solid defensive block.

LAFC couldn’t break them down. Bradley’s team possessed the ball for almost 69% of the game, but only four of its 14 shots were on goal.

The Sounders delivered the death blow in the 64th minute on another counterattack. A botched clearance by Walker Zimmerman was collected by Lodeiro. With LAFC’s defenders marking forward Jordan Morris, Lodeiro slanted a pass to Ruidiaz, who was trailing the play. Ruidiaz fired a shot by Miller to extend the Sounders’ lead to 3-1.

The home crowd was furious. Fans angrily booed when referees didn’t whistle borderline fouls and potential handballs that would have favored LAFC. The place sounded like Dodger Stadium with the Dodgers on the verge of elimination.

Shortly after the game’s conclusion, LAFC’s players tried to make sense of the disaster.

The question of whether the loss tarnished the team’s regular-season accomplishments was something the players had trouble answering.

“I think it’s hard to draw conclusions,” Vela said in Spanish. “The game is still fresh.”

What Vela did say was that two years into the franchise’s existence, “We’re still not the team we want to be.”

LAFC now shares the motto of every other major sports team in town: There’s always next year.