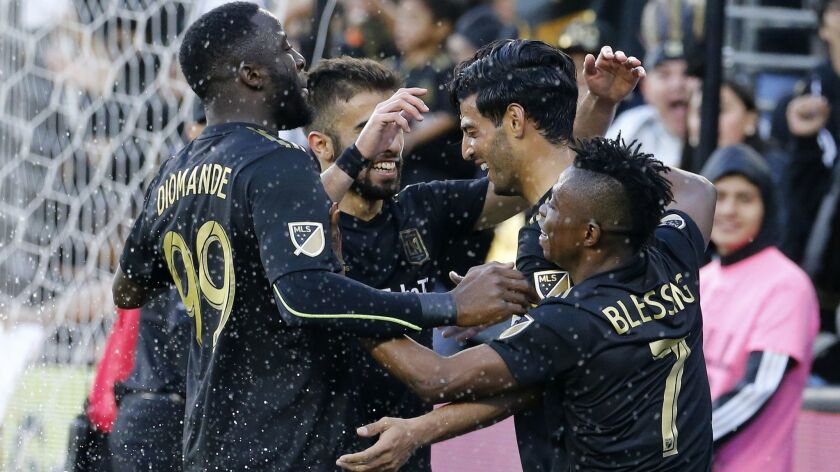 Guillermo Barros Schelotto set one goal when he took over as coach of the Galaxy last winter: get the team to the playoffs. So now that he’s there, he intends to enjoy it.

“It’s like when you are going to [a] party,” he said after a light training session last week. “Now we’re going to dance.”

He’ll have to wait before the music starts, though. The end of the MLS regular season coincided with the penultimate FIFA international window of the year, so the league is taking an extended break before the playoffs. And that could prove challenging for players who averaged a game about every five days for the last seven months.

“Do club coaches like international breaks? Of course not,” said LAFC coach Bob Bradley, whose team will go 17 days between games, nearly double its longest break of the season. “The schedule for every club in the world in October and November are made more difficult because of the international breaks.”

It’s more difficult in MLS because the break takes players out of a season-long rhythm just before the biggest games of the year. And with MLS using a single-elimination postseason format for the first time, there is no margin for error.

Mark Abbott, the league’s president and deputy commissioner, concedes the schedule isn’t perfect but says it’s better than any of the alternatives.

In recent years, MLS has gone directly from the regular season into the playoffs, but that meant pausing in the middle of the tournament for the November FIFA break, robbing teams of momentum and challenging the attention span of fans. Playing through the break is unacceptable because it would force teams to go without their top stars, who are on international duty.

The only way to avoid having the playoffs interrupted by the FIFA dates was either to schedule the season to end more thana month earlier, or to start the playoffs after the November break and play into mid- or late December, Abbott said.

“Both of those alternatives were significantly worse than what we’ve come up with,” he said.

What they came up with was pushing the end of the season back to early October, then scheduling the postseason tournament during the five weeks between the fall FIFA dates. It’s the latest in an evolving series of tweaks to the postseason calendar over the past decade, but one Abbott says should stick.

“We spent about a year studying this with the intention of, when we made the change, having it be a sustainable change,” he said.

There is a drawback though: a two-week break between the regular season and postseason.

In an effort to manage that break, the Galaxy (16-15-3), who will go 13 days between their regular-season finale and their playoff opener against Minnesota United on Oct. 20, took a day off last week, then played a midweek scrimmage against Liga MX side Tijuana.

“We need to be smart and take time to rest,” said Schelotto, whose team stumbled to the finish line, losing its last two games in failing to secure home-field advantage.

Midfielder Jonathan dos Santos, who has played 37 games for club and country this season, said he welcomed the break.

“Personally and collectively it’s really good because now we have time to work on the little details that cost us some games. It’s something positive for us,” the Mexican international said in Spanish. “We can recuperate mentally, in the physical. But we’re not going to lose the work that accumulated over many days.”

The Galaxy had two breaks of at least 14 days between MLS matches during the season and won both times in their return to play.

The schedule for LAFC (21-4-9) is even more challenging. If you include U.S. Open Cup games, in which Bradley used most of his top lineup, LAFC never went longer than nine days between games during the best regular season in MLS history, one in which it broke league records for points (72) and goal differential (plus 48) and tied the record for goals (85). The break could kill that momentum.

“The 2½ weeks or whatever is long,” Bradley said.

So Bradley has broken it into three four-day training segments similar to ones he used during the summer, with off days on either side.

“You want to be able to keep players here and have a type of continuity. We’ve had other international breaks, so we’ve done this before,” said Bradley, who is hopeful of having forward Adama Diomande available for the first time since he voluntarily entered the MLS Substance Abuse and Behavioral Health Program last month.

Bradley’s team will face another challenge when it finally returns to the field since it will be facing the winner of the Galaxy-Minnesota United game.

“We have to approach that game and be sharp the first 15 minutes because the team that we’re playing against [will have] played a game four days before playing us,” goalkeeper Tyler Miller said. “It’s a tricky situation to handle.”

The MLS schedule makers could say the same thing.