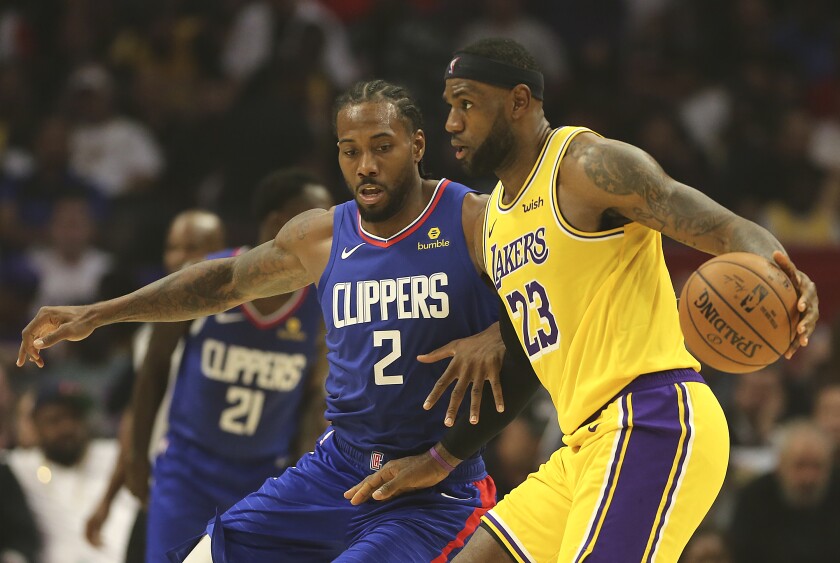 Column: Lakers take ownership of the glitz while the Clippers simply own the game

The Lakers owned the majority of the arena, their fans roaring loudest even though it was a Clippers home game.

The Lakers owned most of the drama, LeBron James falling away, Anthony Davis spinning around, the beauty of the new duo both brilliant and breathtaking.

The Lakers owned every inch of the glitz Tuesday during the ballyhooed opening night city feud at Staples Center.

The Clippers owned everything else.

They owned the Lakers.

After three periods of a deadlock, the Clippers put the Lakers in a hammerlock, outscoring them in the final dozen minutes for a 112-102 victory in a game that epitomized the teams’ current stature in this town.

“The moment they made the schedule it was almost positioned like a prizefight in a lot of ways,” Clippers coach Doc Rivers said.

And so it was, with the Lakers throwing all the swooping roundhouse punches while the Clippers were content to jab, jab, jab until the Lakers finally toppled.

It was a fight that lived up the hype, a night filled with exhausting emotion, grand theatre, hoarse and sweaty fans, and two statements.

The Lakers confirmed that they will be, um, very interesting. Will they figure out their defense? Can they add another guard somewhere? Will the return of injured Rajon Rondo and Kyle Kuzma change anything?

“We have a ways to go,” said new coach Frank Vogel in an understatement.

The Clippers, meanwhile, simply confirmed they will be very, very good.

Favorites to win their first NBA title? You could see why. Turning more than few heads in a town that has long been fixated on the Lakers? This could be their chance.

The difference between this town’s two teams was accurately predicted in a pregame troll from the Clipper video board, which flashed the following messages.

“Grit over Glam.” “Squad Over Self.” “We Over Me.” “Street Lights Over Spotlights.”

It would all be so cliché if it weren’t all so true.

The Clippers are so good they can win a game like this with one new superstar tied behind their back. With sore-shouldered sidekick Paul George sidelined, headliner Leonard soared, scoring 30 points with gritty drives and impossible shots.

The Lakers, meanwhile, are suffering from some of the same problems as last season, even with both superstars active. They don’t play great defense. They don’t have much depth. They were beaten on the offensive glass despite their overwhelming height advantage.

“I don’t know how many times I saw our bigs fighting their bigs and our guard coming over and tapping the ball and keeping it alive. I thought that was very impressive,” Rivers said.

“We’re so used to closing out games and fighting for whatever,” Beverley said.

The Lakers, meanwhile, don’t really resemble a team yet. The offense can’t get started when James isn’t on the court, the defense was beaten for layups and open jumpers. The Clippers scored twice as many second-chance points, 17 more fast-break points and an astounding 41 more bench points.

“I thought our ball movement could be better,” Vogel said. “Offensively we looked like a group that’s new to each other.”

When Danny Green sank a three-pointer to give the Lakers the lead in the final seconds of the third quarter, Lakers fans leaped to their feet in hope. But then JaMychal Green countered with a three just seconds later to end the quarter in an 85-all tie, and the Clippers never blinked again.

With oppressive defense and disciplined offense that included a three-pointer from newcomer Maurice Harkless and all kinds of work everywhere from star subs Harrell and Lou Williams, the Clippers went on an 11-2 run that essentially finished it.

“What I saw from our team was overall team toughness,” Rivers said. “They hit with a punch to start and we just kept moving forward.”

When it ended, with the Clippers victory song “California Love” blaring, Clipper fans were the last one standing, the last one cheering, they finally had the floor to themselves.

Both groups of fans surely were emotionally wiped out after basically a three-hour tug of war.

The city feud surfaced with the initial strains of the national anthem. During Tori Kelly’s first pause in the song, a fan shouted, “Go Lakers” and the place roared.

Then Leonard stepped up with a microphone and was booed so loud you barely could hear him speak.

“Welcome Clipper fans to the season,” Leonard said over the jeers. “We’re going to fight hard every night. Let’s get it going.”

The minute it got going, the Lakers fans kept it going, roaring again when James scored the season’s first points on a layup, and later filling the arena with “M-V-P” chants when James shot free throws.

The mixture of emotion was perfect for a rivalry that seemingly has reached an unrivaled stage.

This is the 35th anniversary season of this matchup, but it’s never felt this big.

This was the 154th meeting between these teams, but it’s never carried so much weight.

For the Clippers, it feels like their first chance to begin to make even a tiny dent in the Lakers’ 90% occupation of the hearts of Los Angeles.

The Clippers have won 24 of the last 29 games between the teams and have better records than the Lakers in each of the last seven years. But they still trail in the overall series, 101-53, and have never come close to matching the Lakers’ popularity in a town that lives on such things.

For the Lakers, it was their best chance in six years to show that, no, no, no, they’re still the Lakers. They have another dynamic duo in the shape of Shaquille O’Neal and Kobe Bryant. They have a new coaching staff. They have their own legitimate championship hopes.

“Hopefully we’ll see that tonight, it’s the start of a new era of Lakers basketball for us,” Vogel said beforehand. “In that regard, it’s a big game for us.”

Turns out, their big game was a big bust despite all the chatter and cheers.

On this first night of the NBA season, a night when most folks were again talking about the Lakers, the scoreboard again screamed for the Clippers.