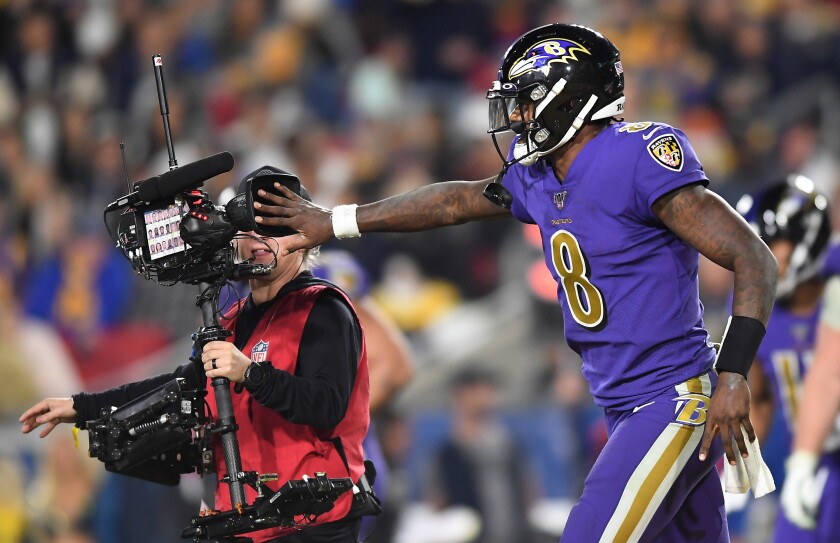 When Tom Brady arrived at the University of Michigan he was listed sixth on the depth chart. In the preseason of his senior year, the school was ranked No.6. When he graduated, he was one of six Wolverines drafted. The New England Patriots selected him in the sixth round. He’s won six Super Bowls.

The story of Brady practically sells itself, especially with his good looks, supermodel wife and all of those sixes. It’s the kind of story a league with a conservative image like the NFL loves to wrap its revenue-generating arms around. It’s what GQ magazine holds up as the standard for American masculinity. It’s what networks hope will never change.

Lamar Jackson has an inspirational story too, but it’s not like Brady’s.

He doesn’t talk like Brady, wear his hair like him or pretend he doesn’t hear the critics. No, Jackson prefers to troll them, as he did during his game against the Buffalo Bills by donning a white sleeve and glove a week after San Francisco 49ers radio analyst Tim Ryan suggested his dark skin gave him an advantage hiding the ball during an option. While Jackson is as mobile as Patrick Mahomes and Russell Wilson, he’s not like them either. The reality is as unique as Jackson the quarterback might be. Jackson the pitchman-in-waiting is equally as unique. If he maintains this level of play, and more importantly continues to win, he’ll become the de facto face of the league, something few thought possible when he was drafted.

How the NFL handles the branding of this unlikely star will be a fascinating look into how intersectionality influences stardom.

The Norman Lear Center at USC used Facebook data to determine which NFL team’s fan bases were most liberal and which were most conservative. The franchise with the highest percentile of “very conservative” fans? Brady’s Patriots. The team identified with the most liberal fans? Jackson’s Ravens. If you were to group fans that Facebook identified as “very conservative” and “conservative” together you will find three of the top five franchises have had an MVP within the last six seasons. If Jackson were to win this season he’d be the first player from a franchise in the top five in terms of “very liberal” and “liberal” fans since the 49ers’ Steve Young in 1994.

Of course, this could all be a coincidence. You know the way Colin Kaepernick lost the ability to play the position soon after he started protesting during the national anthem.

I don’t know Jackson’s politics but I do know he’s not clean cut and his Floridian accent is thick. I know he has dark skin and research has shown colorization politics is a global phenomenon that has impacted societies for centuries. As it pertains domestically, a Harvard study found “dark-skinned blacks in the United States have lower socioeconomic status, more punitive relationships with the criminal justice system, diminished prestige, and less likelihood of holding elective office compared with their lighter counterparts.” Remember the controversy surrounding the 1994 Time Magazine cover that infamously published a darkened O.J. Simpson for its cover shortly after his arrest? Don’t forget the results found from a 2010 CNN study that recreated the “doll test” from the 1940s. Time and time again children identified the lighter skin dolls as being “good” and the darker ones “bad.”

Being conservative or liberal doesn’t determine how a person processes skin color. But it does influence how an industry measures relatability and markets celebrity.

It’s an uncomfortable conversation for a country desperate to place prejudice in its rearview. And there are some who believe pointing out our shortcomings perpetuate them, which is akin to believing acknowledgment of an open wound makes the victim bleed more. In reality, ignoring the wound could lead to an infection, even death. Similarly, our propensity to avoid talking about disparities along color lines has only proven to make things worse, not better.

Thankfully the NFL is beyond the point in which exceptional black college quarterbacks such as Warren Moon and Willie Totten are forced to go to Canada to play a position executives once believed blacks were not smart enough to play. And a season after a record five black quarterbacks led their teams into the postseason, it appears it will have back-to-back quarterbacks of color as MVP for the first time.

But Jackson is not like Mahomes, who won the award last season.

He’s not like Cam Newton or Steve McNair, the other two black quarterbacks to win the award.

With long, braided hair framing his face and enough swagger to wear “deal with it” shades on the sideline during the final minutes of a 49-13 rout of the Cincinnati Bengals, Jackson is not the kind of quarterback the NFL has historically positioned to be its biggest star. No more than the manner in which he plays the position is something the league is accustomed to drafting, grooming and building an offense around.

Was Jackson’s playmaking ability so special that he could not be denied or did being drafted by a team with the most liberal fan base in the league allow him to be his best, full self? Will advertisers and league executives believe his appeal is broad enough to supplant an aging Brady as the league’s biggest star? The answers to these questions do not solely lie in how he plays but in how his play is described.

Is it instinctive or the result of studying?

Is he the face of the league or the Ravens’ star?

A story like Brady’s, with all of the sixes and stuff, is absolutely amazing. But so is Jackson’s. How the league feels about it, and him, will determine how it is told ... and eventually sold.