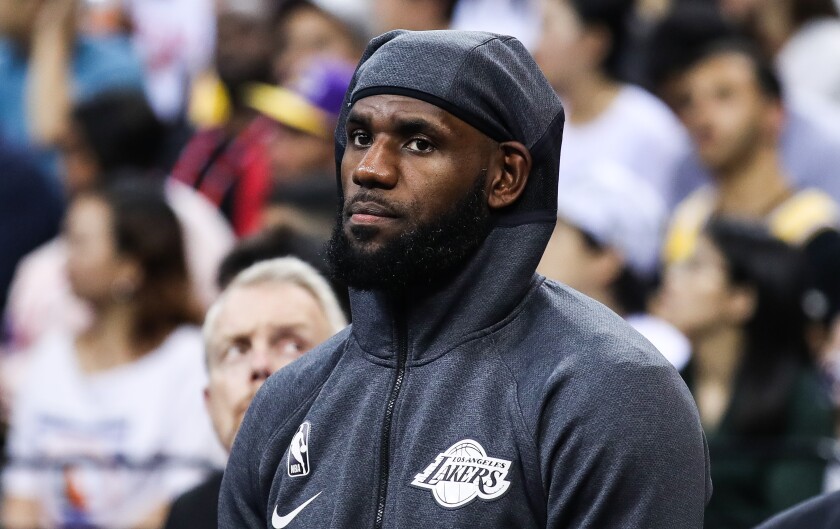 A few minutes after LeBron James said social media isn’t always the best place to express political opinions, he resorted to social media to clarify what he professed he had really meant in his first comments since the Lakers’ return from a tension-filled trip to China.

But James’ tweets Monday evening did little to illuminate anything except that he still blames Houston Rockets general manager Daryl Morey for costing him and other players money as a result of the activities and business opportunities that were canceled as part of the backlash against Morey’s tweeted support of anti-Chinese government protests in Hong Kong.

Speaking at a news conference held in a hallway at Staples Center before the Lakers’ first home exhibition game, James said Morey was “misinformed or not really educated on the situation,” in making a statement whose impact turned out to be swift and financially punitive for the NBA. Later, James tweeted that Morey, “Could have waited a week to send it.”

James added, “Let me clear up the confusion. I do not believe there was any consideration for the consequences and ramifications of the tweet. I’m not discussing the substance. Others can talk About that.

“My team and this league just went through a difficult week. I think people need to understand what a tweet or statement can do to others. And I believe nobody stopped and considered what would happen.”

So, it was the timing rather than Morey’s pro-human rights sentiment that was objectionable? If James takes to Twitter again, maybe he can clarify that too.

NBA-themed events tied to the games in China were canceled and advertisers pulled their company names off the playing floor. China’s state-run TV station and another NBA partner, tech company Tencent, didn’t show or stream the games. Other companies that suspended their relationships with the NBA last week could sever those ties, which would lead to a significant drop in revenues and in the salary cap.

Don’t underestimate the extent of players’ concern about Morey’s tweet costing them money. Business was at the top of the agenda for the China trip for the league and for players whose shoes, jerseys and images are coveted there. James made that clear. Asked if having nongame events canceled had enabled the Lakers to more strongly bond, he answered affirmatively.

“A lot of individual appearances got canceled so it kept us even closer,” he said. “It allowed guys not to be able to go on their own and obviously, yes, a lot of people had some business to take care of while they were over there, too, business on basketball, but with the cancellation of so many different events and so many different appearances it allowed us to be together, all of us, just our whole team.”

Players didn’t speak to the media while in China, and James said Monday they didn’t feel well-enough informed to address the pro-democracy protesters in Hong Kong who inspired Morey’s since-deleted tweet. In addition, Commissioner Adam Silver’s scheduled news conference in China was canceled. “I think when we all sit back and learn from the situation that happened, understand that what you could tweet or could say — and we all talk about this freedom of speech,” James said. “Yes, we all do have freedom of speech but at times there are ramifications for the negative that can happen when you’re not thinking about others and you’re only thinking about yourself.

“I don’t want to get into a feud with Daryl Morey but I believe he wasn’t educated on the situation at hand and he spoke. And so many people could have been harmed, not only financially but physically, emotionally, spiritually. So just be careful what we tweet and we say and what we do even though yes, we do have freedom of speech, because there can be a lot of negative that comes with that.”

The business of the NBA is business, James’ insistence aside that the league’s relationship with a country that has a notoriously bad human-rights record is intended to spread the gospel of basketball and “to be able to bring people together in the most positive way.” He repeatedly mentioned the potential negative impacts of freedom of speech. He didn’t mention the positive impacts, some of which have changed the course of nations and the world. The NBA is calculating the cost of freedom and the cost of doing business and it hasn’t decided which side of the ledger will win out.