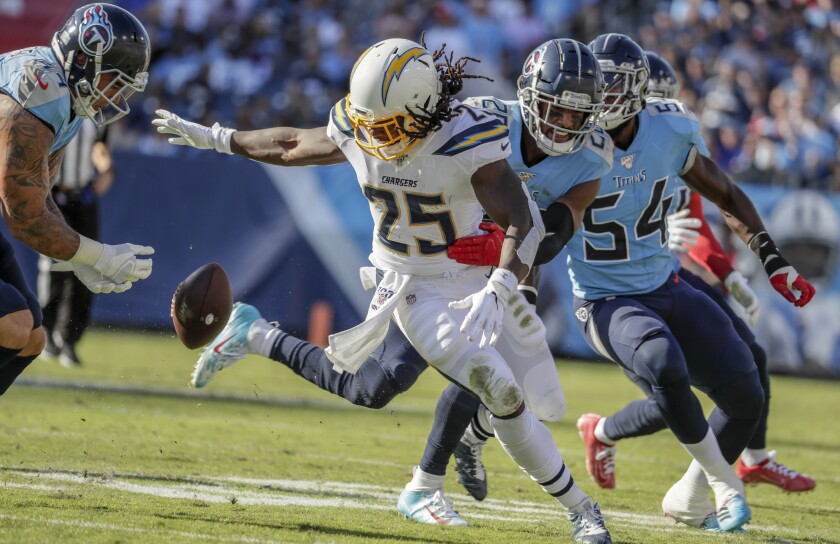 Column: Melvin Gordon lost the ball, and control over his emotions, against Titans

Running back Melvin Gordon covered his head and face with a towel, hoping the world wouldn’t see his devastation after he fumbled inside the one-yard line on Sunday and consigned the Chargers to a 23-20 loss to the Tennessee Titans. But no bit of cloth could hide the redness of his eyes, and if they leaked a few tears he wouldn’t admit it a day later.

Normally sure-handed, Gordon couldn’t hold on to the ball when the Chargers most needed him to protect it and most needed a win. He thought he’d be able to get it for them. After holding out and missing the first four games this season, he had played two games but hadn’t broken any long runs, clearly not back to being his old, powerful self.

As the Chargers prepared to face Tennessee, he felt he was regaining his sense of speed and timing. “I kind of came in the game like, ‘OK, I’m ready to go,’” he said.

In those final seconds, he got nowhere in two tries, once from the one-yard line and then on that fumble inside the one. When the ball squirted away so did the playoff hopes of the Chargers, who have lost three straight and came away with only one victory from a stretch of five or six winnable games.

That left Gordon sitting dejectedly on the sideline in Nashville, the towel draped over his face but failing to shut out the world or hold in his distress.

“It’s an emotional game, and one thing I hate most about [Sunday] is I let you all see me sweat and showed emotion out there. But I hate letting my teammates down more than anything,” he said Monday at the team’s Costa Mesa practice facility. “We’re in a position right now where every win counts, every game counts, and I was a little bit more frustrated about that rather than anybody else’s opinion, just the guys. We fought back to try to get back to win that game and putting the ball in my hands to win the game, which I’ve been in that situation so many times, and just come up short.”

Gordon’s holdout has backfired spectacularly. The two-time Pro Bowl pick didn’t get a raise or extension — he’s playing for the $5.6 million fifth-year option on his rookie contract — and he lost his game fitness. He’s averaging 2.3 yards per carry and 27 yards rushing per game, down from 5.1 yards per carry and 73.8 yards per game. As a receiver, he had 50 receptions last season for 490 yards; this season he has nine receptions for 34 yards.

Asked if he would have done anything different related to his holdout, he responded with a long, deep sigh. “I know I won’t miss another training camp again, I can tell you that,” he said. “But if I was to go back, I can’t say. Just with the running back thing and all that, we want to get paid, you know. I don’t know. That’s tough.”

He does know he’s in the precarious position of trying to catch up to and jump into a moving train, even if the Chargers’ train is headed nowhere. “We’ve just got to play better as a group. Just me, I could be a lot better,” he said. “You can’t emulate the game, game day. I don’t care how many reps you do on a high school football field it can never compare to what you get on game day. So I knew coming in, just the game speed and things like that, to get my feet wet a little bit, I knew it would take some time.

“Been in this situation before,” he added, referring to the scrutiny he endured after he was drafted No. 15 in 2015 but didn’t score a touchdown that season. “You kind of feel like the world is against you in a sense and everything is under a magnifying glass, under a microscope now, considering the situation leading up to me coming back. So it’s just like you do something bad, everything, it’s blew up now. You don’t play, you don’t win, it’s blew up. If I make a mistake, it’s blew up. So it is what it is. It’s part of the game. I understood that coming in.”

No matter what happens, Gordon said he won’t show his feelings again in public. He’s equating displaying emotion with being weak, and that’s not the case. “You’re never supposed to let them see you sweat or show emotion out there. And it’s an emotional game,” he said.

“Missing training camp and not being here, every play you want to be perfect. I missed four games, whatever the case may be, and it’s like you want to come out here and you want to show your teammates, ‘I’m still the guy. I’m that guy. I could do this. I could put the team on my back,’ and things like that. So when you go out there and you don’t make a play, it’s not that they feel different, but it’s just a pride thing.”

He said he was most bothered by knowing his cousins and other family members saw him get upset. “I want them to know when they get in tough situations, you know, you can handle it. Let everybody know you can handle it,” he said. “And I’m so mad at myself because I never do that.”

He finished by adding, “And if you’re going to show pity, show pity alone.”

This isn’t the time for him or the Chargers to indulge in self-pity. They still have games to try to win and tickets to sell in the new stadium they’ll occupy next season. They’ll have to sweat out the rest of this season, in full public view.