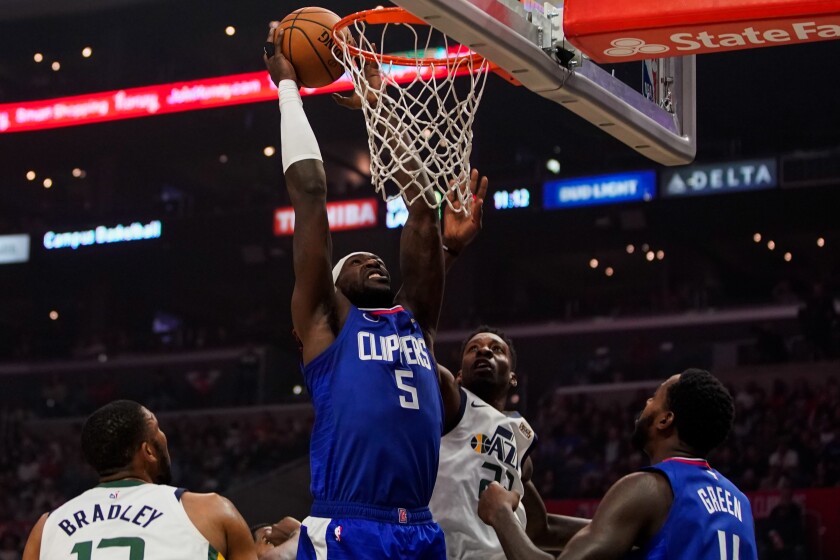 Column: Montrezl Harrell proves again why the Clippers were right in keeping him

The Clippers weren’t sure exactly what they had when they acquired center Montrezl Harrell, who was one of the many pieces they got from the Houston Rockets in exchange for Chris Paul in June 2017. They were so uncertain about what he could do that they considered waiving him. He wasn’t an automatic pick when they began formulating a training camp roster before the 2017-18 season.

“It’s funny,” coach Doc Rivers said of Harrell, who came to the Clippers with Patrick Beverley, Sam Dekker, Darrun Hilliard, DeAndre Liggins, Lou Williams, Kyle Wiltjer and a 2018 first-round draft pick. “We did the trade with Houston, and it felt like they sent us 15,000 players, you know? And we were trying to figure out who we were going to invite to camp. I’m finicky about too many people in camp. It messes camp up.”

After some discussions about whether to bother bringing in Harrell, Rivers decided he had shown enough hustle in two seasons with the Rockets to merit a close look. That proved a wise decision.

“It took us about four days in camp to know that we had gotten lucky, that he was far more than just an energy player, that he could score and he could do things,” Rivers said. “Luck happens. It’s good when it does, on your side.”

The Clippers got lucky, and Harrell has gotten better and better. The energy that Rivers saw and loved was on full display Sunday, along with the tenacity, rebounding and scoring that have made him so valuable off the bench. Kawhi Leonard’s 18-point outburst in the fourth quarter provided the wings that lifted the Clippers to a 105-94 victory over Utah at Staples Center, but Harrell was the catalyst of their fourth-quarter rally and was a monster on the boards when the Clippers most needed to surge ahead in a grinding, physical game.

“It was all about doing all the winning plays to keep my team in it,” said Harrell, who played the entire fourth quarter. He had nine points and grabbed four offensive rebounds among his five rebounds in the final 12 minutes.

“We had a lot of defensive lapses in the first half,” Harrell added. “We came in here and talked about what we wanted to correct and what we wanted to get better at and we just went out there and imposed our will in the second half.”

Harrell, who finished with 19 points, eight rebounds, two assists and one block in nearly 30 minutes, entered the game with 6 minutes 57 seconds left in the third quarter and the Clippers trailing by seven. Their deficit ballooned to 61-51, but Harrell helped cut it at the end of the quarter to 69-65 with a tip and a dunk off a setup from Williams.

“We just wanted to come out and play the right way. We definitely didn’t want to drop one at home,” Harrell said. “As always, you want to protect your home court.”

The Clippers began to thrive when they upped the tempo in the second half. Harrell brought them even at 72-72 by grabbing a rebound with his right hand and then scoring on a layup, and he brought them even again at 74-74 on a jumper off another assist from Williams. He set up Leonard for a 26-foot three-pointer that gave the Clippers the lead, and although the game was tied twice after that, the Clippers never trailed again.

Coming into the fourth quarter, Harrell had only one focus. “Second-chance points, man. Crashing the glass. Keeping the ball alive. Not settling on the glass, really,” said Harrell, who gave the Clippers a 91-88 lead by getting a second-chance basket after a miss by Williams, and helped them finish with a 29-8 edge in that category.

Of course, it helped to have Leonard step up and find his rhythm after going one for nine (and 0 for 3 from three-point range) in the first half.

“I’ve been telling you guys all along, Kawhi is a winner. He’s a superstar,” Harrell said. “He knows how to win. He’s won on multiple big stages with multiple teams. So it’s not a surprise. No matter what he’s shooting from the field he always can get hot.”

Leonard has been everything he was billed to be. Harrell said he hasn’t learned anything new playing alongside Leonard instead of against him because he already knew what the veteran could do.

“When you go against that type of player multiple times in the year, you see the things that he does. He just comes over and does it for your team, pretty much,” Harrell said. “It’s not anything different that we hadn’t seen. We knew he was a defensive stopper, we knew he could score the ball. Everybody in the league, I think, knows he has that one-two dribble pull-up down to a T. So it’s not anything different. He’s just a winner.”

Harrell, who will be a free agent after this season, is proving his own value on a team that hasn’t changed its junkyard dog mentality despite the addition of two superstars in Leonard and Paul George, who’s still rehabbing from shoulder surgery. Harrell hasn’t had a double-double yet this season — he had 17 last season — but when the Clippers needed his muscle Sunday, he was there. They were lucky, but he has been good.