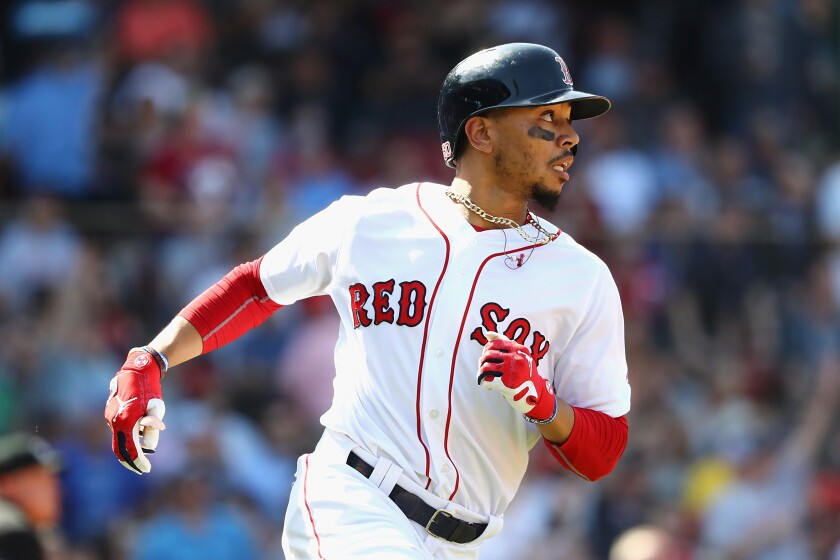 Column: Mookie Betts needs a Mookie Wilson-like moment to ‘Do the Right Thing’ for Dodgers

It’s one of the most memorable at-bats in World Series history: 1986 Game 6, 5-4 score, bottom of the 10th, two outs, two strikes and an outfielder named Mookie Wilson desperately trying to keep the New York Mets season alive against Boston Red Sox closer Bob Stanley, who would eventually retire as the franchise’s all-time leader in saves. Of course this match-up is mostly known for Bill Buckner’s error, but Stanley’s wild pitch led to the run that tied the score. More importantly, Wilson battled — fouling off pitch after pitch until he finally connected on the dribbler that would haunt Buckner and propel him into New York folklore.

Now, you’ve probably heard of the game “Six Degrees of Kevin Bacon,” but did you know there’s a similar connection with Mookie?

You see, the Mets would go on to win Game 7 and the championship. Three years later Spike Lee, who grew up a Mets fan, released his third film, “Do the Right Thing.” It’s based in New York. The protagonist’s name? Mookie. In the spring of 1990, a long-distance runner from Grambling had a child who would go on to become a world-class sprinter himself. That baby’s name was Rakieem Mustafa Allah Salaam but his nickname is, you guessed it, Mookie.

“My mom said my name came from the movie,” Salaam said. “I was running around as a kid and she kept yelling my name ‘Rakieem, Rakieem’ but I guess I wouldn’t stop. So she said she called me Mookie and I stopped and turned around. She said she was joking but when I didn’t respond to my name but responded to Mookie, so — it stuck.

“It’s funny, when I was getting known in track and field, some commentators on TV would call me Rakieem and others would call me Mookie, and sometimes they wouldn’t know they were talking about the same person.“

Salaam said he hasn’t met another Mookie in sports, but he did meet a woman named Mookie in Atlanta once.

“I have a cousin named Bookie,” he said. “In [the movie] ‘New Jack City’ there’s Pookie. Considering that, I’m happy with Mookie.”

New Dodgers outfielder Mookie Betts did not get his name from Wilson or Salaam but rather Mookie Blaylock, the former NBA All- Star who was drafted by the New Jersey Nets in 1989, the same year “Do the Right Thing” was released. Similar to Salaam, Betts’ mother gave him the nickname after watching Blaylock play on TV.

Here’s the real fun part: Mookie Blaylock was also the original name of Pearl Jam. They selected the name because they were fans of the basketball player. In fact, the name of their album “10” is in honor of the number Blaylock wore. The lead singer of Pearl Jam is Eddie Vedder, a big supporter of President Obama. The president asked Vedder to perform at his farewell address, which was held in Chicago in 2017. During his goodbye, Obama thanked his wife, Michelle, noting “For the past 25 years, you’ve been not only my wife and mother of my children, but my best friend.” Their first date? They went to go see the independent movie “Do the Right Thing”.

“In all honesty, I have no idea where the name came from,” Wilson said. “That’s been a question asked of me many, many times but I don’t have an answer. There is a story circulating that when I was younger I couldn’t pronounce the word milk, but that’s not true.

“Nicknames are very common in my family. Grandparents always called their grandkids nicknames, so it could have been from them and it just stuck.”

Wilson said he met Blaylock briefly when they were both in New York but never asked where he got his name. He also hasn’t seen “Do the Right Thing.”

“I’m not a moviegoer,” he said. “I heard people talk about it and I know it’s Spike Lee and he’s from New York, but I haven’t seen it yet. I have no idea if he named the character after me but it sure seems that way, doesn’t it? I’m sure there were Mookies before me but I didn’t know of any ... definitely not one who was doing the things I was doing when I was playing. It’s just one of those funny timing things I guess.”

However, Wilson, who currently lives in South Carolina, said he is familiar with the latest Mookie in the outfield.

“He is a fantastic ballplayer,” Wilson said. “He does everything. He has speed, surprising power for a guy his size, great defensive player. He’s not the size of Mike Trout but he’s every bit as good as he is. It’s going to be weird not seeing him in Boston, but I’m excited to see him out in L.A.”

He’s not the only one.

“From one Mookie to another, I liked Mookie in Boston but I love Mookie in Los Angeles,” said Lee, whose Mookie remains the most iconic.

At least for now.

If Mookie Betts has a storybook ending in the World Series the way Mookie Wilson did, all of that could change. At least for Chavez Ravine.