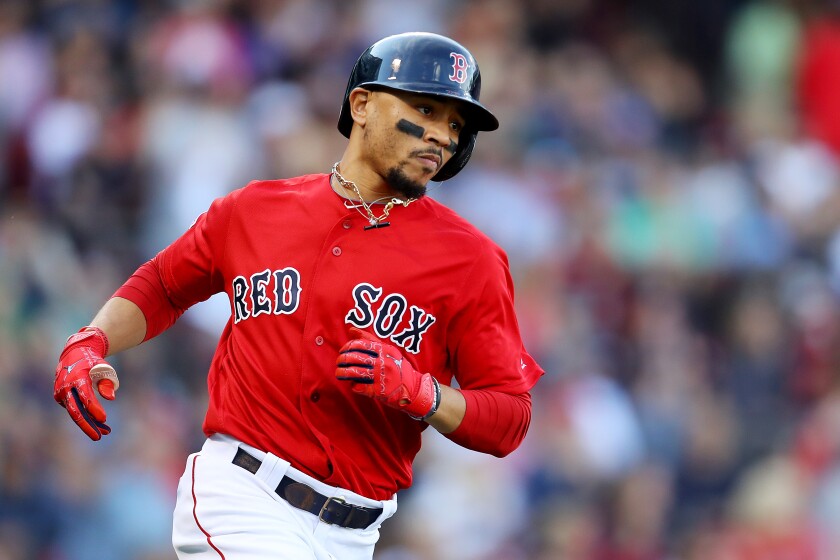 Sitting on their hands?

The Dodgers just balled those hands into fists and came out swinging.

Afraid to open their wallet?

The Dodgers just climbed up on baseball’s main stage and made it rain.

Their competitiveness questioned, their intentions doubted, the Dodgers turned on a fastball of criticism Tuesday night to crush the biggest hit of the Guggenheim era.

The resulting sound will fill Dodger Stadium in a summer that suddenly forecasts extremely hot.

In acquiring former American League MVP Mookie Betts and expensively aging pitcher David Price from the Boston Red Sox in a deal that sent outfielder Alex Verdugo to the Red Sox and pitcher Kenta Maeda to the Minnesota Twins, the Dodgers did two things most folks lamented they would never do.

They traded the immediate future for now.

They spent bunches of money to make that happen.

They made two championship decisions in a title-chasing shakeup which was hinted by team President Stan Kasten this offseason in an interview in this column.

“The team we have now is not going to be the team we have to start the postseason,” Kasten vowed at the time to much disbelief. “I expect that team, this year, it looks like it’s going to be well over the [competitive balance tax], or somewhat over.”

To more disbelief, Kasten added, “There are guys that we think could be difference makers and we have pursued them … when there is an opportunity we will certainly jump at it.”

Man, did they ever jump, leaping all the way from February to deep in October.

Start with Betts, the centerpiece of the deal and the corner outfielder of the Dodgers dreams.

They added more than a leadoff hitter in a batting order without one, and a right-handed power hitter in a lineup that needed one.

More important than all that, in Betts they may have finally found their missing championship piece.

It might seem as if they’ve made this type of blockbuster addition before, but this time it feels different. This impact feels enormous. This hope feels real.

This is not the 2017 midseason trade for the pressure-racked Yu Darvish. Betts has a championship ring after homering against Clayton Kershaw in the clinching Game 5 of the 2018 World Series.

This is also not the 2018 midseason trade for the selfish Manny Machado. Betts runs out ground balls and everything else, as he led the AL in runs scored in each of the last two years.

As compelling as what they acquired in Betts is what they didn’t acquire. They didn’t get a guarantee that he will be here more than one season. He can be a free agent next offseason. He could basically be a rental.

The Dodgers wonderfully didn’t care. They’re going for it now. They’re clearly as desperate to end the 31-year drought as the rest of this town, and it starts with Andrew Friedman.

Friedman gets it. He understands a city’s hunger, perhaps because it now matches his. He knows the window could slowly close on this seven-division-championship era, and he’s not going to stand for simply winning 95 games and having a great farm system.

Friedman is about late October now, not just October, but late October, and he showed it this offseason with his furious pursuit of pitcher Gerrit Cole.

It wasn’t Friedman’s fault they lost Cole. A spending-conscious ownership group lost him. Yet, Kasten and the Guggenheim folks changed their tune Tuesday to make this trade happen.

Betts apparently would not have been traded here if the Dodgers didn’t agree to take on Price and some or all of the $96 million owed him. That’s a lot of money for a declining talent, yet Kasten apparently signed off on it anyway.

Indeed, let the good times roll, a beleaguered fan base has reason to let out a winter howl, their rich team is pouring money back into the product while their smart baseball boss is maximizing those assets to chase a championship now.

All this and, who knows, maybe the sore-wristed Price can figure it out and again resemble the pitcher who was 2-0 with a 1.98 earned-run average against the Dodgers in that World Series championship.

As for what the Dodgers gave up, Verdugo could be an impact player one day, but he’s no Betts, not right now. Although Maeda was a nice regular-season starting pitcher, he spent his postseasons in the bullpen, and unhappily so.

Oh yeah, also Tuesday the Dodgers reportedly traded away a 36-home run guy in Joc Pederson, but, let’s be honest, in this new outfield he becomes a surplus bat. They traded him to the Angels for valuable young middle infielder Luis Rengifo, who can play a variety of positions and will help them more than Pederson.

On any other day, the Pederson deal would have been the headlines, but Tuesday was far from any other day. It was a day when the Dodgers finally connected with their fans on their definition of success.

Remember when they last made this sort of trade with the Red Sox? It was in August 2012, when they acquired Adrian Gonzalez, Josh Beckett and Carl Crawford, among others, in a monumental eight-player deal. Not coincidentally, the next season they began the current run of seven consecutive division championships.

It’s only fitting, perhaps, that they have turned to the Red Sox again in an effort to finally complete this long and arduous journey.

Mookie Betts, after all, was acquired to be more than just their new leadoff hitter and right fielder.

He has come to be their closer.