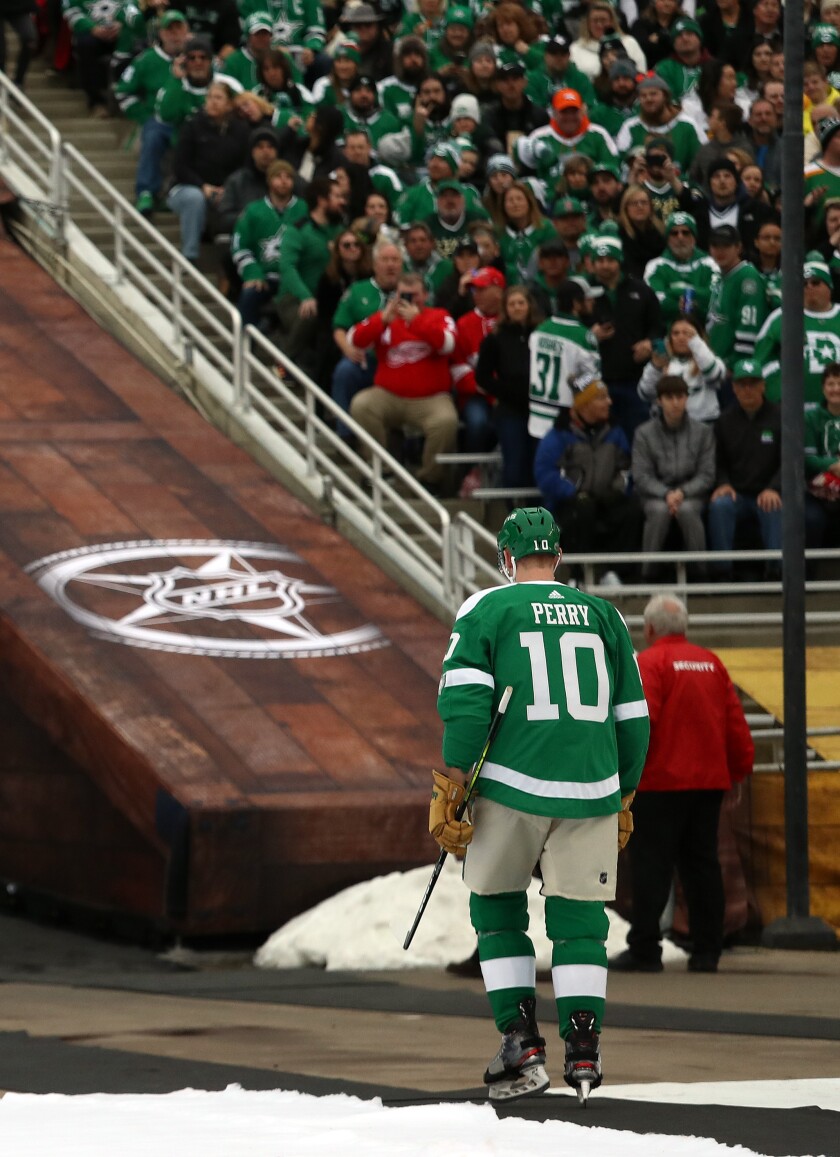 The piglet races during timeouts were amusing and the cowboy theme was a hit, but Corey Perry’s walk of shame after he was ejected from the Winter Classic might be the lasting memory of the NHL’s showcase event.

The abrasive right wing, who signed with Dallas as a free agent after the Ducks bought him out last June, was given a game misconduct and ejected for elbowing Nashville defenseman Ryan Ellis in the head during the first period on Wednesday.

Because the rink was set up in the middle of the football field at the Cotton Bowl, Perry had to trudge several hundred feet to the locker room in full view of fans and a national TV audience. His solitary stroll spawned countless funny memes with clever music dubbed in.

In a rare sensible ruling by the inconsistent minds in the Department of Player Safety, Perry was suspended for five games, which means he will miss the Stars’ visit to Anaheim on Thursday. His walk of shame and suspension were punishments that fit the crime.

Sorry I took so long with this pic.twitter.com/Ha0BbVfyY7

The Dallas chapter of Perry’s career has been a flop. When the Stars gave him a one-year, bonus-heavy $1.5-million contract, they hoped his experience as a Stanley Cup winner, two-time Olympic gold medalist and 2011 NHL MVP would outweigh his declining production and injury history. But so far he has three goals, 13 points and 36 penalty minutes in 34 games and can’t stay on the right side of the line between being annoying and reckless.

Despite the nifty setting, the TV broadcast was the lowest-rated Winter Classic to date. A matchup of teams with low national profiles and competition from college football undoubtedly hurt, but the NHL should be concerned that it has killed the novelty of playing outdoors by staging too many outdoor games.

Thinned by injuries, the Montreal Canadiens signed Ilya Kovalchuk to a one-year, two-way contract worth $700,000 in the NHL and $70,000 in the minor leagues. He last played on Nov. 9 and sat for more than a month before the Kings bought out his three-year, $18.75-million contract and made him a free agent. The Kovalchuk era in Los Angeles ended with him having played 81 games over 1½ seasons — for which he got about $14 million — and producing 19 goals and 43 points. He was a poor fit for the Kings. He’s now Montreal’s reclamation project.

“He has to buy in,” Canadiens general manager Marc Bergevin said at a news conference. “It’s a mind-set. He knows it’s his last chance. We have nothing to lose. We’ll see where he’s at, where his game’s at and we’ll decide. It’s going to be up to him.” No risk for Bergevin but likely not much reward, either.

Scoring ticked upward during the first half of the season, and no lead was safe.

Teams combined for an average of 6.1 goals per game, the second-highest goal total in the last 23 years, and erased multigoal deficits (regardless of the result) in 140 games, or 21.9% of 638 contests. There were 111 third-period comeback wins, which the NHL said equaled the third-highest total ever through 638 games. Teams that trailed by three or more goals at any point of a game rallied to win 14 times, the most in 30 years. Nine of those three-goal comebacks for wins occurred in the third period, the most through 638 games.

Jim Montgomery, fired as the Stars’ coach for “a material act of unprofessionalism,” said Friday he had begun treatment for alcohol abuse.

“Losing my job as head coach of the Dallas Stars last month was a wake-up call. It was also the appropriate call,” Montgomery said in his first comments since his surprising dismissal. “I let the team’s front office, staff and players down. More importantly, I let my wife and family down. The team’s decision to end my role forced me to look in the mirror and decide whether I wanted to continue living a damaging lifestyle or get help. I turned to professionals in the field of alcohol abuse for their guidance and counseling.”

He said he admitted himself to an inpatient residential program, “where I intend to take the steps to be a better husband, father, friend, coach and mentor — one day at a time. It’s a process I am committed to.” Good luck to him as he takes those steps.

The Golden Knights and goaltender Marc-Andre Fleury announced he will decline his invitation to the All-Star game but didn’t offer a reason. His withdrawal follows Washington forward Alexander Ovechkin’s decision to skip the event, which will be held on Jan. 25 in St. Louis. Each must serve a one-game suspension before or after the All-Star break. Fleury’s spot will go to Canucks goalie Jacob Markstrom.

Vegas coach Gerard Gallant will coach the Pacific Division team in the three-on-three mini-tournament, Bruce Cassidy of the Boston Bruins will coach the Atlantic, Todd Reirden of Washington will coach the Metropolitan, and Craig Berube will guide the Central Division. The selections were based on which team had the best points percentage in each division at the halfway mark of the season.

It’s a blow for the All-Star game to lose Fleury, whose sunny personality makes him a great ambassador. But it’s tough to blame him for choosing rest over playing in an exhibition that showcases scoring and makes goalies look bad.

Before Gary Bettman became the NHL’s commissioner he was third in command at the NBA behind commissioner David Stern and deputy Russ Granik. Stern gave him a priceless education on the importance of global marketing and promoting players, and Bettman took good notes.

Among the ideas Bettman adapted for the NHL are the salary cap, instituting a draft lottery, expanding the All-Star game into a weekend of events, and making the game more accessible through TV and digital technology.

The NHL’s revenues and fan base grew exponentially because Bettman learned well from Stern, who died on New Year’s Day. “There was no area he didn’t work on with Russ and me,” Stern said of Bettman in a 2012 Los Angeles Times story. “The three of us would just sort of finish each other’s sentences and worked very hard to do it. Gary was incapable of being overloaded by work. He was indefatigable and always happy to take on new responsibilities.”

Stern was a longtime friend to Bettman, who adopted some of his mentor’s imperious attitude. “He was a man of great vision and energy who is responsible for the operational and business advancements that created the modern sports industry,” Bettman said in a statement. “David taught me how to be a commissioner and, more importantly, how to try to be a good person.”