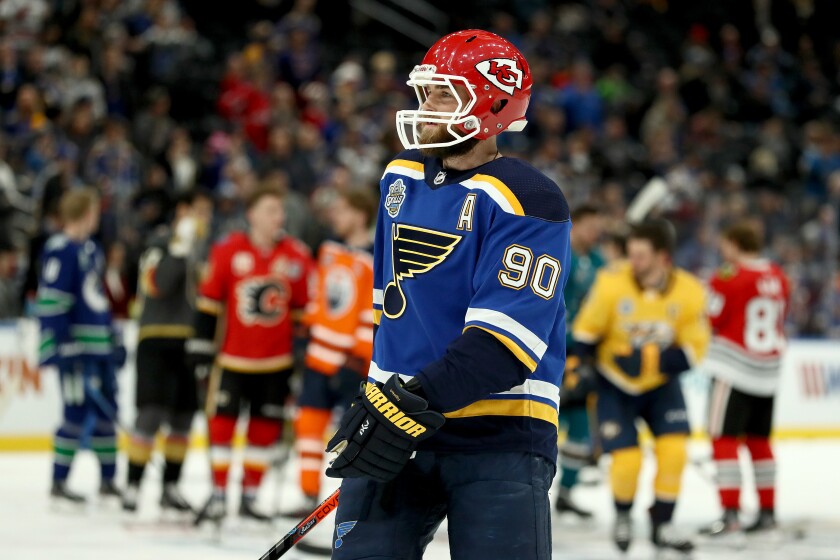 When the NHL announced a year ago that St. Louis would host the 2020 All-Star weekend, it seemed like a consolation prize to the city for having a bad team. The Blues were 12th in the Western Conference at the 2019 All-Star break and were three points out of a playoff spot — and that was an improvement over their last-place standing a few weeks earlier.

The Blues staged a remarkable second-half surge that set them on a path to the Stanley Cup and turned this year’s All-Star event into an extended celebration hosted by the reigning champions. They’ll resume play Monday as No. 1 in the West, having become a model of what can happen in a short time when talent, work ethic and insightful coaching come together to form a perfect mix.

“They had an amazing year last year, and they’ve been a great team this year too, so it’s pretty interesting how they’ve turned the corner and become a top team in the NHL,” Chicago Blackhawks winger Patrick Kane said. “But I think their story is something a lot of teams will look at, especially coming into the last 30 games of the season, where teams are in the standings and if you can go on a run you could do something special.”

The Blues don’t seem to be complacent.

“I think we’re very good, and we know how good we can be,” forward Ryan O’Reilly said. “We’ve got to be playing our best hockey at the end of the year.”

It’s tough to say whether another team can come close to replicating the Blues’ revival. The hottest teams entering the All-Star break were the Florida Panthers and Columbus Blue Jackets, each with a six-game winning streak. The young Panthers led the NHL by scoring an average of 3.67 goals per game, and their power-play efficiency was a healthy 24.5 percent. The Blue Jackets were tied for second best in goals-against average at 2.51 partly because Elvis has entered the building: Latvian goalie Elvis Merzlikins has won five straight games, compiling a 1.00 goals-against average and .970 save percentage in that span, with three shutouts.

Florida was third in the Atlantic and Columbus had the East’s first wild-card spot as the All-Star break began. That’s significant for both teams: The Panthers have missed the playoffs the last three years and six of the last seven, while the Blue Jackets reached the second round last season but have never gone beyond that. It’s difficult to see them making long playoff runs, but few people thought the Blues would either.

The Kings went into their bye week and the All-Star break having lost four in a row and seven of eight, putting them at a tipping point. They’ve become good enough to lose close games to good teams when they work hard, but there’s a danger the lack of positive results will drag them down emotionally and undo their gains.

“We’re out of the playoffs by a little bit and certainly not the position we want to be in, but at the same time we’re trying to turn this thing around, so you want to go and steer this ship in the right direction,” said Kopitar, tan and refreshed from a vacation to Turks and Caicos. “Everybody realizes that there’s going to be changes right up until the [trade] deadline. There’s going to be some stuff that’s going to get moved around, but at the same time you’ve just got to keep your head down and work towards our common goal, which is turn this thing around and get it going in the right direction.”

Coach Todd McLellan has done well to get the Kings on track. He will have to do even better to continue making progress.

“Even though the results are not there, you’re seeing a different team than it was last year,” Kopitar said. “We’re in games. Todd told us the other day, before we left, that if we’re No. 1 in close games lost, which is not what you want to be on that side of the spectrum, but at the same time that’s kind of a positive because we’re in the games. Last year, there were many blowouts where we just rolled over and didn’t do anything.

“But there’s some young guys and some older guys that we have to remind how it is to win and to win those close games, and it’s the young guys that need to learn. That’s what we’re going towards.”

The NHL has cut the All-Star weekend from three days to two and has been innovative with the skills events, but it still hasn’t been able to persuade all of its top stars to attend the festivities.

Washington Capitals forward Alexander Ovechkin, who is eight goals from 700 in his career, skipped the trip to rest, but his pursuit of Wayne Gretzky’s record of 894 goals was frequently discussed in St. Louis. Gretzky’s record was once considered unassailable, but Ovechkin could challenge it if he avoids injuries. Asked about Ovechkin on Saturday, NHL Commissioner Gary Bettman gushed and said he was missed. “We understand,” Bettman said of Ovechkin’s decision, then paused. “No, we don’t,” Bettman added, still stung by Ovechkin’s snub.

Vegas goaltender Marc-Andre Fleury also declined to participate. Like Ovechkin, he will serve a one-game suspension as punishment.

The new “Shooting Stars” skills contest got mixed reviews. Kane called it “a little gimmicky” to put players on platforms above the ice and have them shoot at targets, while other players said they missed the old puck control relay and target shooting format. Expect next year’s game in Sunrise, Fla., to incorporate more of the puck- and player-tracking technology that was used this weekend and will be deployed in all playoff games this spring and in all arenas next season.

Consensus among players was that the brief three-on-three exhibition between elite Canadian and American women’s players was a fine addition. “I think it’s a really good stage for it to be on to show everyone how talented and impressive they are,” Washington goaltender Braden Holtby said. Calgary forward Matthew Tkachuk agreed. “It was intense,” he said. “You could tell they really wanted to win. It was awesome.”