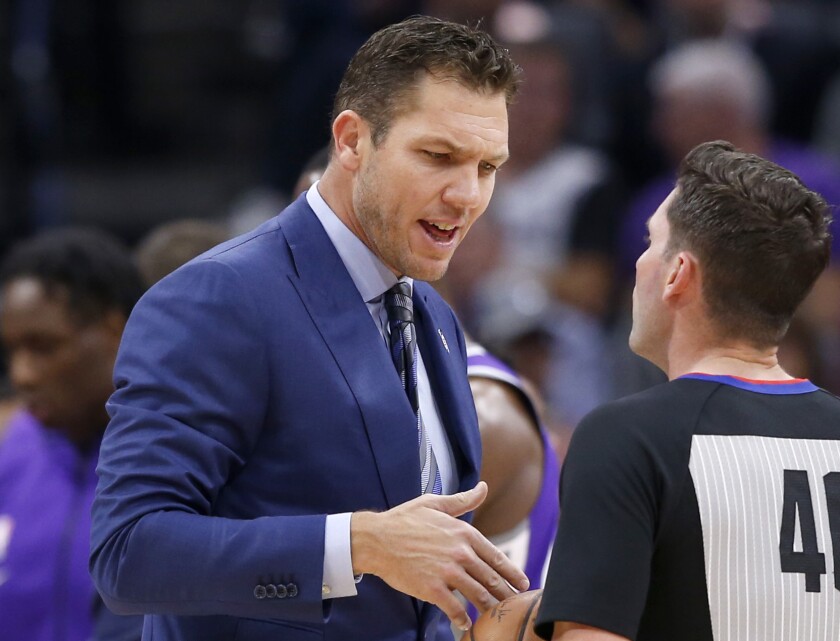 If his name was Matthew, Mark or John, there wouldn’t have been any question. But because of the name Luke Walton’s parents gave him, no one was quite sure what they were hearing when he was announced Friday night in Sacramento before the Kings took on the Utah Jazz.

Were the vocal fans inside the Golden 1 Center saying “Luuuuuke,” the chant that’s followed him since he was player? Or were they already fed up with their winless team and showering their new coach with boos just six games into the season?

Based on the results so far, you’d be smart to bet on the latter, though by the end of the night, angst had been — at least momentarily — transformed into cheers.

The Kings weren’t going to go 0-82 this season, but there still was a sense of relief in the building when Sacramento beat Utah 102-101 for its first win. However, we’re not any closer to answering the question that’s surrounded the Kings coach since he first took the big seat at the front of the Golden State Warriors’ bench while filling in for Steve Kerr.

Is Luke Walton a good coach?

The answer, when you talk to scouts and executives who have studied the Kings, is an almost unanimous, “It’s hard to say.”

Just as it was impossible to give Walton credit for what happened on his watch with the Warriors, who went 39-4 as he guided them in Kerr’s absence, and just as the front-office dysfunction and back-room strategizing undermined his final season with the Lakers, Walton’s Kings tenure has begun with the same issues that have made it tough to figure out just how good he is at his job.

There are some questionable roster fits, heightened expectations and a truncated training camp that made the Kings’ early season problems more predictable than surprising.

Time will shed more light on what’s going on in Sacramento.

The Kings spent most of last season pushing for the team’s first trip to the playoffs since 2006, a journey that quickly lost steam amid tension between coach Dave Joerger and vice president of basketball operations Vlade Divac’s front-office staff. The Kings lost 17 of their final 26 games, Joerger was fired and Walton took over, landing softly after his Lakers departure.

While the Kings overshot expectations last season with 39 wins, the most they’ve had during their playoff drought, the rocky end to the season should’ve maybe reset them. Instead, their success, coupled with Walton’s hire and a spending spree on veteran free agents, made some people think the Kings would be in the playoff race again.

They still might — multiple Western Conference executives asked about the Kings stressed that it was too early to tell — but there are signs of trouble.

A preseason trip to India didn’t help the team’s preparation, and by Walton’s own admission, his players aren’t in peak condition.

Signs throughout their arena advertising for Apple Pay say “We play fast. Pay fast.” Except, right now, the Kings don’t play fast. The Kings were 26th in the NBA in pace of play after Friday’s games, ahead of tortoises like the Jazz, Denver Nuggets and Orlando Magic.

Then there’s the roster. The Kings committed more than $180 million in free agency to veterans Harrison Barnes, Cory Joseph, Trevor Ariza and Dewayne Dedmon. So far this season, that group’s combining to average just 27.6 points per game.

Barnes scored the game-winning basket Friday on an offensive rebound, Ariza starred on defense, and Dedmon finally showed he could be effective as a poor man’s Brook Lopez. But contributions like this once every two weeks won’t lead to a good return on the Kings’ investments.

Their young backcourt of Buddy Hield and De’Aaron Fox has a lot of talent, though their decision-making is still inconsistent. Hield repeatedly attacked Jazz center Rudy Gobert as if he’s not a two-time NBA defensive player of the year. And Fox, who might be the fastest player in the league, moved too quickly through the lane, firing a hammer dunk off the back rim, the ball bounding all the way past mid-court. The Jazz, of course, made a three-point shot on the next possession.

Again, it’s just too hard to say, especially this early in the season.

The Kings stood by Walton when trouble emerged right after he was hired. Sued by former Spectrum SportsNet reporter Kelli Tennant over claims of sexual assault, the NBA and Kings, through a joint investigation “determined that there was not a sufficient basis to support the allegations.”

There’s not a lot of suspicion that Walton’s job is in trouble now because of the Kings’ slow start. He and Divac are on the same contractual arc and another coaching change — the Kings have had 10 since their last playoff appearance — would add to perceived instability.

If he succeeds, no one will argue that anyone could’ve done the job Walton did in Golden State. If he fails, no one will claim he was undermined by high-powered agents, star players and front-office chaos, like they did around the Lakers.

If the Kings succeed or fail, the people will either yell “Luuuuuke” or “booooooo.”

And for the first time in Walton’s coaching career, we’ll have an idea which one he deserves most.