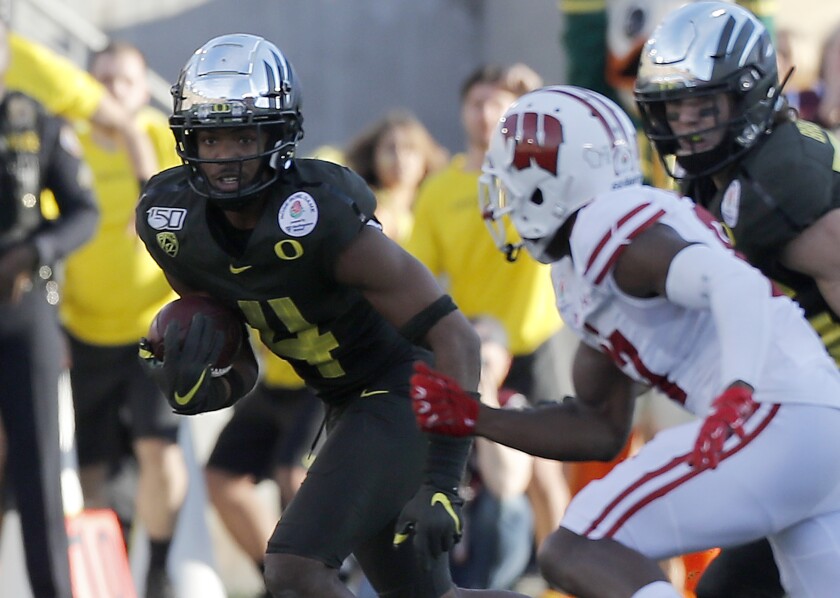 Column: Oregon wins Rose Bowl with players who should be on USC or UCLA

The truth was as startling as the screaming Ducks who danced around a green-confetti-strewn Pasadena field early Wednesday night as if it was their backyard.

For many, it was.

Oregon just won the Rose Bowl with a roster including more than 30 players who grew up within 70 miles of that Rose Bowl.

Oregon just used kids from South Los Angeles to Norco to Rancho Cucamonga to Mission Viejo to defeat a bunch of behemoths from Wisconsin 28-27 in a game that held one bit of consolation for the Badgers.

The real losers here were USC and UCLA.

A program from an adjoining state just won what is annually their season’s most important game on their turf with many of their kids. Yeah, this actually might have been their worst loss of the season.

As the local programs struggle, the Ducks are soaring. As the locals’ recruiting rankings stall or drop, the Ducks continue to take players from underneath their out-of-joint nose, building that rare Pac-12 Conference team that could actually outmuscle a Big Ten Conference hulk.

With about one-third Southern California kids, they beat Wisconsin despite being outgained 322 yards to 204 because they stole the ball four times and shut down the Badgers in crunch time.

With Southern California kids, Oregon won by playing the sort of toughness that USC used to have, with the sort of resilience that UCLA’s Chip Kelly used to engender, thanks to the kind of recruiting that neither place is doing.

This ownership of the local football landscape won’t last forever, it might not even last until USC gets a new coach. But it’s real right now, as real as all those screaming Ducks fans who stuck around the Rose Bowl into Wednesday night as if they owned the place.

Check out the smile on the face of the Calabasas High kid who caught a 12-yard pass to set the tone for Oregon’s game-sealing drive.

Now check out the wardrobe of his older brother, Michael Jr., a USC receiver who was spotted after the game wearing — wait for it — an Oregon jersey.

“We’ve got all these SoCal recruits because, if you want to win, you come to Oregon, that’s all there is to it,” Pittman said.

The message was as plain as the sweaty smile on the face of Thomas Graham Jr., the former USC commit from Rancho Cucamonga who intercepted a pass that led to Oregon’s second touchdown, then later offered an Oregon pitch to his Southland buddies.

“We’re taking over,” he said. “Get away from home, get out of trouble, get away from all the distractions, grow as a player and a man, become a Duck, and I promise you won’t regret your decision.”

Graham was part of a second-quarter sequence where Southern California kids were everywhere.

With 8 minutes 37 seconds remaining in the first half, Troy Dye from Norco High ripped the ball from the hands of powerful Badgers running back Jonathan Taylor and Deommodore Lenoir from Los Angeles Salesian High recovered it.

After Oregon failed on a fourth-down run, Wisconsin regained possession only long enough to lose it to another Southern California kid, this time on an interception by Graham with pressure applied on quarterback Jack Coan by Westlake Village Oaks Christian’s Kayvon Thibodeaux.

Two plays later, running back CJ Verdell from Chula Vista carried 13 yards to the Wisconsin five, from where Oregon-grown quarterback Justin Herbert carried it in for one of his three rushing touchdowns to give Oregon a 14-10 lead.

In all, two of three Ducks who carried the ball were from Southern California, one of the four receivers who caught passes were locals, and five of their top nine tacklers were from the Southland.

It all fits into coach Mario Cristobal’s eye-opening answer when he was asked this week about recruiting in Southern California.

“For us, this is home state,” he said of the Southland. “That’s what it is. We’ve made it a priority ... so every opportunity to be in a big game like the Rose Bowl, I think it certainly helps recruiting.”

In winning this game, Oregon backed up the fun yet furious culture that it has been selling. The Ducks wore the flashy dark green and silver uniforms, yet played old-school smashmouth football, then partied like a bunch of crazy kids, dancing in the locker room while puffing on cigars.

It is a culture that has resulted in a 20-6 record over the last two seasons, including two bowl victories.

It is also an atmosphere that attracted the 18th-ranked recruiting class in the country this winter, second in the Pac-12. Meanwhile, UCLA was 28th nationally and fourth in the Pac-12, and USC, normally a recruiting powerhouse, ranked 79th overall and last in the conference.

The Ducks, in particular, stole two of the country’s top-ranked defensive forces from the locals, Thibodeaux last year and Upland’s Justin Flowe this year.

Indeed, a large number of Southern California parents crowded a Rose Bowl concourse near the Oregon locker room Wednesday. Mark Dye, whose sons Troy and Travis left Norco to play for the Ducks, offered one theory about the defections.

“The local schools are still well respected, but some of that traditional luster has kind of gone away a little bit,” he said.

“The current age group, when Reggie Bush and Matt Leinart were playing ... those kids were 9 and 10 years old. The rich tradition of both of those schools has started to fade.”

Oregon is clearly the trendy spot, the cool spot, the Rose Bowl’s traditional sounds of “Conquest” replaced Wednesday night by the noise of Ducks fans singing and dancing to their own melody of “Shout.”

The final message of the night came from Troy Dye, delivered to his Southern California neighbors as he sat in a smoky, dizzying Ducks locker room, a statement that served as Wednesday’s true final score.