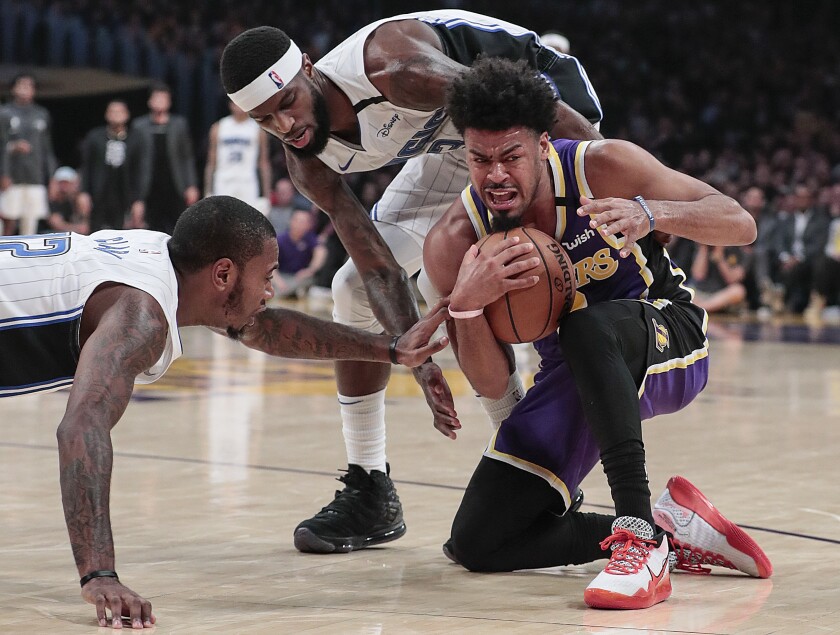 Column: Quinn Cook has a breakout game on an otherwise off night for Lakers

Quinn Cook dressed slowly and methodically, matching his pace and mood to the subdued tone in the Lakers’ locker room Wednesday night.

They had lost for the first time in three weeks, and the taste of defeat after nine straight wins was strange and certainly unwelcome. It also was a reminder that a stunningly successful season might include some bumps if they’re not careful — and even if they are.

Cook had earned the right to smile about his personal success after a season-high 22 points against Orlando and being at the heart of an impressive bench effort that allowed the Lakers to erase a 21-point deficit and take the lead a couple of times in the fourth quarter. But he was as quiet as everyone else after their 119-118 loss to the Magic at Staples Center.

It was the end of the first half of the season and not the end of the world that the Lakers — who started without Anthony Davis and Rajon Rondo and lost Alex Caruso to a blow to the face in the first quarter — fell to a sub-.500 team for the first time in 23 occasions this season. But they’ve set high standards in the locker room and on the court, and Cook is determined to uphold those standards with every ounce of the spirit and fight that have taken him from the development league to the Warriors for their 2018 championship and, this season, to the Lakers.

“I felt good,” he said of his productive night, “but we lost, so I’d rather have zero and win.”

Cook signed a two-year, $6-million contract with the Lakers last summer after Golden State rescinded a qualifying offer and he became a free agent. He essentially has the same role as he did with the Warriors of backup to the backup point guard. At Golden State, it meant a lot of waiting and cheering for Stephen Curry and Shaun Livingston.

With the Lakers, he has LeBron James — the point guard in all but name — and Rondo to watch and cheer for. When Cook has gotten the call, he’s been ready, and that’s not easy.

“Just staying ready, being a professional, just being consumed with winning. Staying in the gym,” said Cook, who is averaging 5.7 points per game in 27 appearances off the bench. “You never know in this league. That’s the sacrifices you have to make when you play on great teams like this.

“When I was with the Warriors and I was sitting behind Steph and Shaun fighting for a rotation spot and I ultimately got that, so same thing here. I’m sitting behind Bron, I’m sitting behind Rondo, two Hall of Famers. I’m just learning every day. I’m just consumed with [being a] winner. I try to get better, try to help as much as possible, be the best teammate that I could be.”

He was all that and more on Wednesday, when he also established season bests with seven field goals and with four three-point shots made. The crowd roared when he hit a three-point shot from the corner that cut Orlando’s lead to 111-110 with 1:08 to play, but the Magic held on despite the three-point heave by Cook with two-tenths of a second remaining that produced the final margin. “I know it’s a long season, but we felt like we should have won this one,” Cook said. “So we’ll learn from it and we’ll get better tomorrow.”

There’s no question Cook will keep working to get better. “I’m happy for him to have an extended opportunity to play, and he’s showing what he can do,” said coach Frank Vogel, who noted that Cook would be playing in a rotation on most teams. “We’ve got a veteran team that is very deep, especially at that position, so credit to him for staying ready and making the best of his opportunity. He was terrific.”

James expected nothing less. Cook was playing for Cleveland’s developmental league team in Canton, Ohio, when James was with the Cavaliers, and the two became close. “I’ve seen Quinn grind. And grind,” James said. “Get the opportunity in Golden State, make the most of it. Continue to work. And now he’s here and he’s making the most of it.

“Just a true professional. Someone who has the ability to put up bunches of points when the opportunity presents itself, but more importantly, he just always stays ready. Great teammate no matter what the circumstances, if he’s playing or not. It’s been great being on the same team.”

Cook said he and James were closer now than they were back then and that James and Davis consistently supported him. “Obviously they give everybody confidence on our team, but us three are always together. Us three are always playing around, joking and stuff. He gives me confidence every single day,” Cook said. “He believes in me, and that’s all you can ask for from your leader. And it means a lot.

“He’s been my mentor since I was 18 years old. He was my vet when I was his rookie in Cleveland, so he’s always been a big brother to me, and he was instrumental in me coming here. He’s just the best teammate you could ever ask for, and it’s just an honor to play with somebody like that.”

The Lakers have won without Davis, though Orlando tripped them up on Wednesday with 21-point performances from Aaron Gordon and resurgent Markelle Fultz. “We wanted to finish this homestand the right way before this five-game road trip, but those guys are a good team,” Cook said of the Magic. “They deserved it.”

The Lakers (33-8) have gotten what they’ve deserved in the first half of this season. Asked to choose a highlight so far, Cook cited the team’s record and not his own progress.

“Just winning, being No. 1 in the West,” he said. “We fought a lot of adversity thus far, and there’s no nights off. We’ve got to keep going, keep getting better, keep doing the [good] habits. I’m looking forward to the second half of the season.”