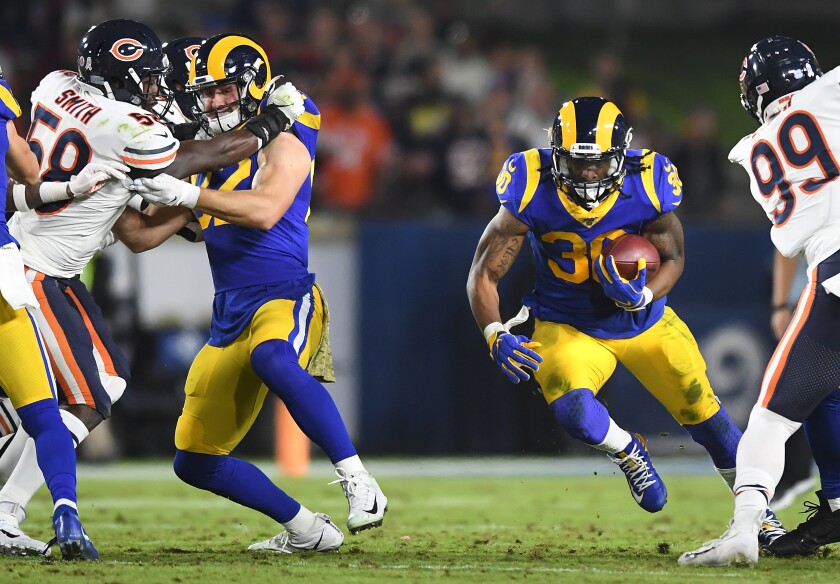 There, that wasn’t so hard, was it?

The fans have screamed about it, the experts have called for it, the running back himself has grimaced over it and, so, finally, on a wonderfully grinding Sunday night, Rams coach Sean McVay finally did it.

He gave the ball to Todd Gurley.

The forgotten running back was found. The Rams’ lost identity returned. The Chicago Bears were toast.

In a 17-7 victory in a raucous Coliseum, 70,758 fans witnessed a truth that has been painfully clear but strangely ignored.

Good things happen when you give the ball to Todd Gurley.

Fireworks happen, the sky blazing with bright yellow streaks after Gurley carried a season-high 25 times for 97 yards and caught three passes for 36 yards.

“I Love LA’’ happens, the song pounding long after Gurley set up a field goal, scored a touchdown, and set up two deep Jared Goff passes that led to the clinching touchdown.

Hope happens, as the Rams moved past last week’s debacle in Pittsburgh, improved to 6-4, and kept their slim playoff chances alive.

When it finally ended, the revived hero stalked off the field to screams of, “Gurley, Gurley, Gurley!” His helmet was still fastened tight, as if he was ready for more carries.

Goff caught up to him and draped his arm around Gurley’s giant shoulder pads and whispered something into his ear.

“He fights, man,” said Goff, his voice thick. “He’s been through the wringer and that dude fights.”

Gurley continued walking tall and steady on his embattled knees, his body language different from his early-season trudges and slouches. It looked as if he felt more empowered. He later said he did.

“I felt good,” said Gurley in the buzzing locker room. “It felt like the old Todd.”

It looked like the old Rams, built around a running attack and a tenacious defense, which has been blistering in the four games since they acquired cornerback Jalen Ramsey.

It looked like the Rams team that didn’t completely rely on Goff, who was more efficient without the burden, completing 11 of 18 passes for 173 yards.

It worked the way McVay envisioned it — finally! — when he cornered Gurley just before kickoff with news of the return of a long-awaited game plan.

The Rams were missing receivers Brandin Cooks and Robert Woods. The offensive line was inexperienced and hurting. They were going to have to run the ball, and for that to happen, one of their early-season strategies was going to have to disappear.

Load management was going to have to take a vacation.

This game was on Gurley.

He quickly got it wrong, losing a fumble on the Rams’ first play. But McVay didn’t blink, putting the ball back in Gurley’s hands on four consecutive plays on the next series. Then, on the Rams’ third series, Gurley took off, carrying the ball four consecutive times for 34 yards to help set up Greg Zuerlein’s 38-yard field goal to give the Rams a 3-0 lead they never lost.

“What I love the most about what Todd did is,” McVay said, “after we put the first carry on the ground, he didn’t flinch and came back, had some good tough physical runs, made some good catches out of the backfield, and he was a big-time contributor tonight.”

Gurley continued pounding throughout the night, not always successfully, but always delivering punishment, proving that while he may have some durability issues, he certainly is not injured. He wore down the Bears defense just enough that it finally broke on a 71-yard drive late in the fourth quarter that ended in Malcolm Brown’s five-yard touchdown run.

Gurley carried the ball three times for 10 yards on that drive, and then, fittingly, ended the game with 12 yards worth of runs that led to Goff’s victory kneel.

Newcomer Ramsey smiled when asked about Gurley, as if it were the most obvious question in the world.

“I hope we feed Todd all the time and let him do his thing,’’ Ramsey said.

The $45-million-guaranteed question all season — and actually dating to the end of last season — has been, how come they don’t feed Todd all the time? While McVay has denied load management and blamed it on his game planning, the boy genius coach is no fool, it’s obvious the Rams are being careful how they use him in the wake of reports that he is suffering from arthritis in his surgically repaired knee.

Gurley has never publicly griped. On Sunday night he finally said why.

“Ain’t nobody going to complain about getting the ball,” he said. “If you do, you’re a damn fool.”

He added, “Like I said, tonight was my night. So you never know. There’s been 11 weeks, but I’m just happy to be able to go out there and grind it out and get this win.”

And to think, Gurley didn’t even touch the ball in the fourth quarter of last week’s five-point loss to the Steelers. McVay said after that game that he blew it by ignoring him. On Sunday in the postgame news conference, he said he learned his lesson.

“Like we talked about, I don’t think I did a good enough job against the Steelers of kind of recognizing the way that he was running,” McVay said. “You don’t want to make the same mistakes twice.”

So I asked him, will he continue to recognize the way Gurley is running and give him the ball more often?

“I think so,” McVay said, and I’m holding him to it. “That’s an ideal situation. We’ll continue to look at this film and we’ll see how we want to put together our next game plan. Anytime you get Todd involved like that, it’s always good for our offense.”

Gurley said he’ll continue to quietly work without questioning the boss or causing a ruckus.“I just do my job,” he said. “It’s one ball. I’ve got to control what I control. That’s what I’ve been doing. Never know which week is going to be your week so you’ve got to be prepared.”

After watching him survive and triumph Sunday, it seems obvious that big parts of their final six weeks should be his weeks, no?

There will be a whole bunch of us damn fools complaining if it’s not.