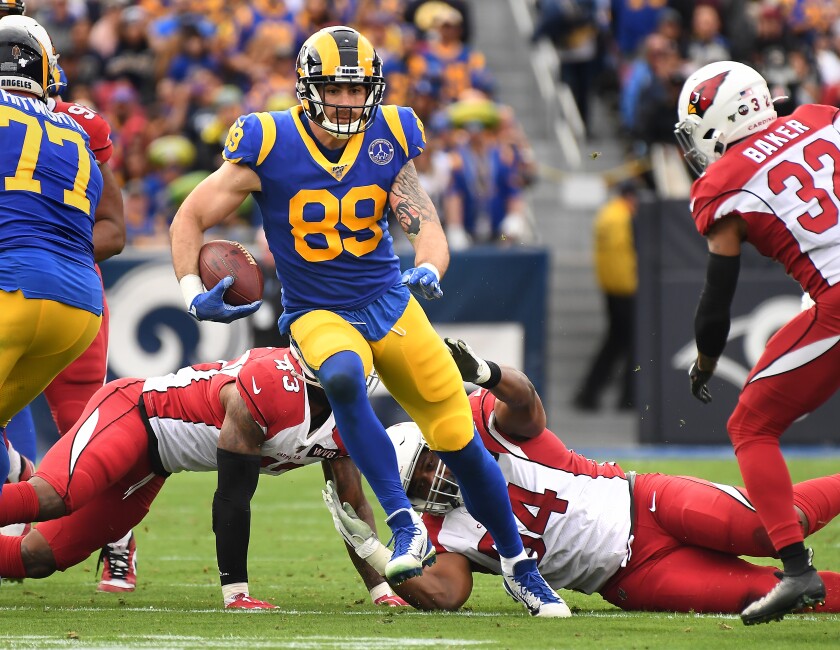 Column: Rams have made themselves relevant in L.A. but need to rediscover identity on field

The difference was subtle but obvious.

The Rams closed a wretched season with a meaningless home game against the Arizona Cardinals.

Whereas the Coliseum was more than half empty in the last game of their first season back in Los Angeles, the stands looked as if they were about three-quarters full Sunday for a 31-24 victory that marked their final game in the 96-year-old stadium.

The Rams will move into a new state-of-the-art stadium in Inglewood next season.

As much as this season was a failure, the Rams accomplished what they set out to do over the four seasons they played in their temporary home.

“We went a long way to building a fan base,” said Kevin Demoff, the team’s chief operating officer.

The Rams aren’t the Lakers or the Dodgers, but they aren’t the Chargers either.

They have played in a Super Bowl.

They have one of the most recognizable coaches in town in the youthful Sean McVay, as well as identifiable stars in Jared Goff, Todd Gurley and Aaron Donald.

They are important enough to have their decisions scrutinized, from signing Goff to a record-breaking contract extension to reducing Gurley’s role in the offense.

And that was reflected by the crowd that cheered them Sunday, a crowd the franchise is hopeful will pay the elevated ticket prices to watch the team play in SoFi Stadium next year.

“To have the crowd that we had today be loud, be into it, no visiting fans,” Demoff said, “was a great way to go out.”

But as Los Angeles has gradually learned about and embraced them, the Rams have lost their sense of identity on the field.

“Not knowing what kind of team are we going to be,” McVay said. “That’s something that we need to do a better job of. We’ve seen when we play at our best level, that’s exactly what we want week in and week out.”

The erosion of Gurley’s left knee and depletion of their offensive line forced the Rams to adjust. They were 10th in scoring this season and had to defeat the Cardinals to finish with a winning record.

As the Rams prepare to open SoFi Stadium, McVay said one of their main priorities will be to rediscover their sense of who they are.

Of the offseason, McVay said: “I think it’s really getting a chance to step away, be able to really kind of digest everything and look at yourself, number one, and figure out how can we develop consistent processes, standards, so that hopefully we can play more consistent week in and week out.

“We got to find a way to commit doing things consistently and obviously it always start with me.”

Goff, who statistically regressed this year after two consecutive Pro Bowl seasons, said he has a clear vision of what the offense should look like.

In Goff’s mind, the turning point for the offense came in the previous victory over the Cardinals, which was in Week 13 in Arizona.

“Since we played Arizona, we kind of did find a new identity,” Goff said. “I think ultimately, we found different ways to win games. I think that’s the biggest thing we can take away. We were so specific the last two seasons and then this year, we had to find different ways to win. Teams figured some stuff out. We had to adjust and we did adjust and we adjusted well.”

The visit to the Arizona was when tight end Tyler Higbee became more involved in the offense. The game started a streak of four consecutive games in which Higbee registered more than 100 yards receiving.

Higbee caught eight passes for 84 yards and a touchdown Sunday.

Goff completed 29 of 45 passes for 319 yards and three touchdowns. Gurley was limited to 68 yards on 20 carries.

Regardless of why the Rams failed to return to the postseason, Demoff said he considered this four-year window a success.

The culture around the franchise has changed, enough to where a team that won four games in 2016 was disappointed to win nine games this season.

Of their time in the Coliseum, Demoff said, “I think everybody always knew this was a temporary stop. You can never truly build your own identity here because it’s USC’s building.”

The Rams were renters but nonetheless managed to establish their presence in the market. They elevated their brand and gave the city an idea of who they were. Now, as owners of a new home, they will have to figure out who they want to be on the field.