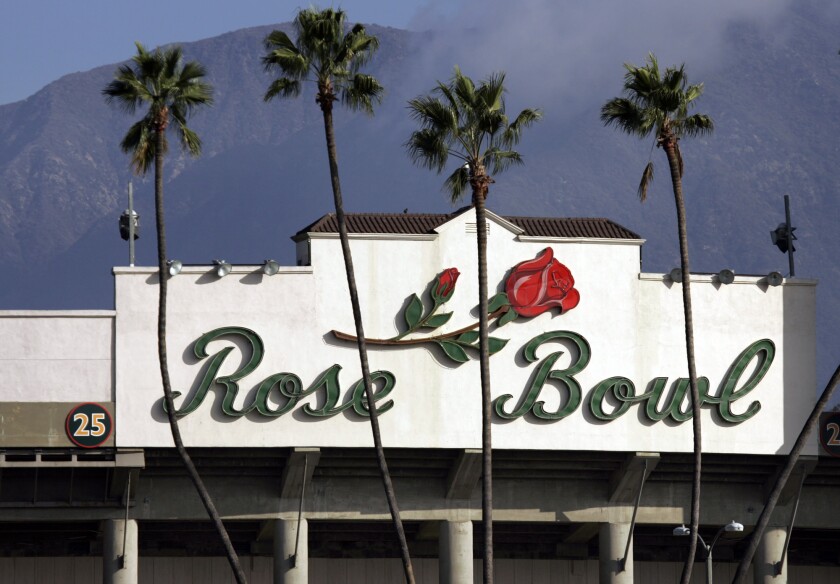 As Oregon and Wisconsin took the field Wednesday afternoon at the Rose Bowl, Knute Rockne’s voice blared from a tiny room in the bowels of the nearly 100-year-old stadium.

After the Rose Bowl opened in 1922, the small space was used as a locker room for six years before being turned into a storage room. Two years ago, it was converted into a small museum to honor a past that included Rockne standing in the center of the room as he addressed “The Four Horsemen” and Notre Dame before the Irish took on Stanford, coached by Pop Warner.

The 106th Rose Bowl on Wednesday was the last football game before the opening of SoFi Stadium, the $5-billion future home of the Rams and Chargers. SoFi Stadium will be the first football stadium built in Los Angeles since the Rose Bowl and Coliseum opened in 1922 and 1923.

The Rose Bowl, which completed a $183-million renovation in 2016, has been the city’s premier football stadium for the last 40 years. It hosted five Super Bowls, most recently in 1993, which is the second most of any venue. It hosted the 1994 FIFA World Cup final, 1999 FIFA Women’s World Cup final and the 1984 Olympic gold-medal soccer game. It also hosted five BCS national championship games and the inaugural College Football Playoff title game in 2015.

Much of that history is captured on the walls of the museum but Dunn understands the stadium’s future as a big-event venue outside of serving as the home of UCLA football and the annual Rose Bowl game will rely on how the stadium improves and evolves with the opening of SoFi Stadium in July.

“We’ve been preparing for an NFL stadium to open up here for 20 years,” Dunn said. “We’ve always realized that was going to be our biggest challenge. So we locked in UCLA and the Tournament of Roses long term. We’ve had an amazing run and we’re going to continue that run. We’re not naive. We know SoFi is going to get a lot of business but we’re not going anywhere.”

UCLA and the Tournament of Roses, which organizes the annual Rose Bowl game, have leases with the stadium that run through 2043. But some of the other big events that have historically gone to the Rose Bowl will now start going to SoFi Stadium in the future.

Taylor Swift, who performed before more than 60,000 at the Rose Bowl in 2018, will open SoFi Stadium with concerts on July 25 and 26. Kenny Chesney, who has performed at the Rose Bowl and has an autographed guitar hanging in the stadium’s museum, will have a concert at SoFi Stadium on Aug. 1. Over the next eight years, SoFi Stadium is scheduled to host the Super Bowl in 2022, College Football Playoff national championship game in 2023, possible World Cup matches in 2026, parts of the opening and closing ceremonies at the Summer Olympics in 2028, and other events that used to be held at the Rose Bowl.

“We need to evolve and we need to figure out how to get better,” Dunn said. “The day we stop looking at the future is the day we’re in a lot of trouble.”

The focus will initially be on the open areas to the west and north of the stadium. The goal is to look into programming possibilities as well as addressing access and parking.

“As facilities and venues continue to change and evolve and amazing amounts of money get put into them, there’s something to be said for staying with your roots,” Dunn said. “This is still the Rose Bowl. SoFi Stadium is going to be an amazing venue in the future for what it is, but it’s going to be a different venue. We’re looking forward to our future too.”