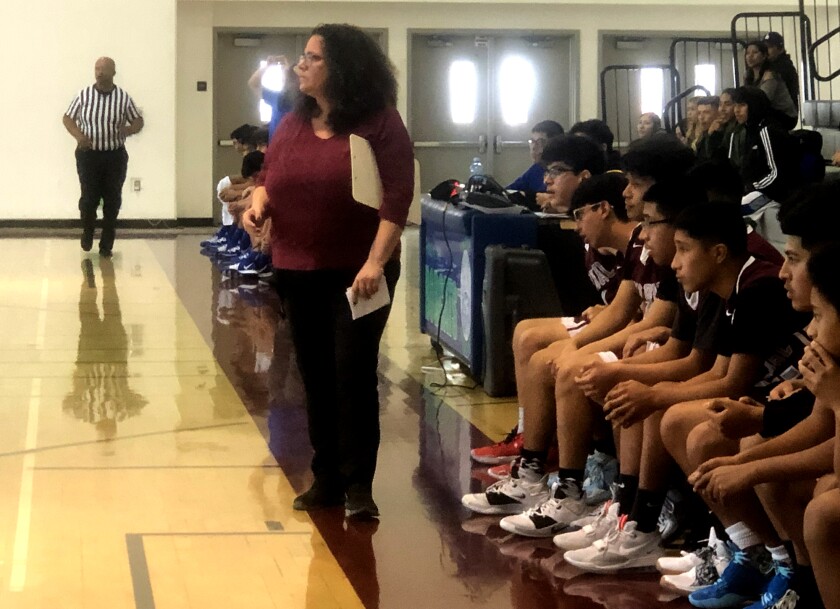 It had been six days since Los Angeles Roybal basketball coach Danny O’Fallon lost his battle with cancer, but his players offered the ultimate tribute Wednesday: They played as if he were still coaching. They were unselfish with their passes, they hustled on defense and they congratulated teammates after each basket.

When the final buzzer sounded at RFK High, Roybal had come away with a 59-37 victory. Players pointed to the sky in celebration.

“It was probably our best game because we played for him,” center Emmanuel Sanchez said.

O’Fallon died last Thursday at the age of 49. He guided Roybal to the City Section Division III championship last season while being treated for Stage 4 colon cancer.

Senior guard Moises Gamboa got the news in a text message.

“I went to my room, looked at my ring and cried,” he said.

On Monday, players came together for the first time in three weeks to practice.

“It was tough,” said Gio Dagher, a freshman on the junior varsity team. “My teammates were crying. Coach was gone.”

Enter interim coach Gina Capobianco. She was an assistant athletic director and former girls’ basketball coach. A woman coaching a boys’ basketball team has happened only on rare occasions in the City Section or Southern Section. Her dark blue nail polish gave a hint of how different things looked on the sideline.

She ran practice the last two days. She didn’t seek the job — she said there was no one else.

“The boys have been great, real accepting,” she said. “I just want to help them get through the emotional stuff and let them be the high school boys they are.”

There was a moment of silence before Wednesday’s game. Players promise to keep following O’Fallon’s teachings.

Moment of silence before Roybal game against RFK in honor of coach Danny O’Fallon. pic.twitter.com/AGikJAGsGw

Robert Moore scored 24 points to help Roybal improve to 3-3 in the Central League.

O’Fallon has left quite a legacy.

“He was more than a basketball coach,” Capobianco said. “He was dedicated to helping these boys become great young men.”

Sanchez was yelling in the fourth quarter after baskets and pointing to the sky.

“He always wanted us to play as a team,” Welch said.

O’Fallon would be proud.

The Coliseum League was ground zero for the rise of City Section basketball. Crenshaw, Manual Arts, Dorsey and Fremont used to battle for supremacy.

This season, two recent additions to the league, Washington and King/Drew, have thrust themselves into the title talk. They played for the first time in league play on Wednesday night.

“We call him Hollywood because all his players are Hollywood,” coach Lloyd Webster said.

Johnson usually comes off the bench but moved into the starting lineup because guard Kalib LaCount was sick. He took a charging foul with 2:52 left and Washington ahead 47-46. His three-point basket with 1:10 left gave King/Drew a 52-48 lead. D’Anthony Ward scored 19 points for Washington (10-10, 2-1).

King/Drew lost to Fairfax 61-60 and might be the second-best team in the City right now behind the Lions.