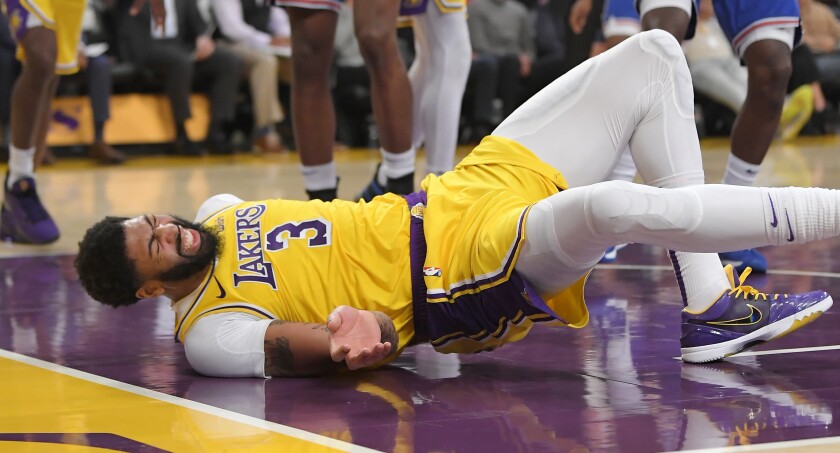 Anthony Davis did not get up.

He remained on his stomach underneath the basket in front of the Lakers bench. His left hand clutched his lower back. His right fist pounded the floor six times.

His teammates surrounded him with sweaty faces slowly going blank. His coach came out, looked down, then looked away. The official scorers’ table horn sounded, then sounded again. It was as if every inch of the giant Staples Center was trying to coax Davis to his feet.

He stayed down for what seemed like an hour. It was probably no more than five minutes. Time stopped and the crowd grew silent as the entire Lakers season sprawled on the floor beneath him.

Finally, Davis stood. A couple of team employees clutched each arm. He took baby steps off the court. He was followed by a stretcher as he slowly stepped toward the locker room.

He stopped in the middle of the tunnel hallway as if he could walk no more. He grimaced. He kept walking. The stretcher kept following.

He later left the building on a golf cart before gingerly climbing into the back seat of his car. One of the two driving forces in the Lakers’ splendid start was unable to drive himself home.

You’ve spent three months enjoying the Lakers’ blessings, now welcome to their curse. A team built strongly on the backs of two of the best players in the world imperceptibly teeters with their fragility. LeBron James is aging, Davis is injury prone, and the Lakers are always one shoe squeak from all hell breaking loose.

One groin pull, and the season is torn apart. One lingering bone issue, and their dream could be cracked. One bad fall, and everyone falls.

This truth accounted for the fear that filled this corner of Figueroa Street with 2:45 left in the third quarter Tuesday night in a 117-87 victory against the New York Knicks. While attempting a two-handed block of a layup by Julius Randle, Davis landed hard on his back, suffering what has been initially diagnosed as a bruised tailbone.

The X-rays were negative. More tests were taken in the morning. No timetable for his return was given. If you look up the injury, officially called a sacral contusion, you’ll read that he could be healed in a month, but nobody here was going to make any guesses based on a web search.

Danny Greene knows only what he saw.

“Ugly fall, man,” said Greene. “It’s probably going to take some time, showing how long it took for him to get up and walk out of here, the way he’s walking out of here.”

Dwight Howard, who has a history of back problems, knows only what he felt.

Kentavious Caldwell-Pope could only ponder what happens now.

“Falling on your tailbone is a lot,” he said. “I hope he gets better soon because we’re going to need him. He’s a really big piece.”

He’s more than a really big piece. He’s half the team. James is the other half. They fit together perfectly. They complement each other marvelously. They encompass the Lakers’ hopes completely.

Howard and JaVale McGee will have to fill the middle. Kyle Kuzma will probably have to go straight from the trading block into the starting lineup. Roles will change. Unrealistic expectations will be demanded. James will once again feel very much alone.

The Lakers quietly worried about this sort of freak injury when they traded for Davis. He has been dinged up so much, he didn’t play more than 75 games in any of his previous seven NBA seasons. Only twice has he played more than 68 games. Yet, this year it had seemed different. He has impressed teammates with his ability to play through pain, missing only two games despite suffering injuries to his right ankle, right knee and right shoulder.

“This is my first experience with him, and he plays through just about everything,” said Vogel. “That’s my only impression of him. He’s as tough as they come.”

A new fight has begun, for Davis, for all of them. The Lakers can still make the playoffs even if Davis misses a bunch of time, but there’s no way they can set themselves up for a championship. They might not be able to make the deal for the playmaker and shooter that is necessary to complete this team. And they might risk losing home court advantage to either Denver or Houston.

They need Davis back sooner than later, and they need to find another gear while he’s gone.

James, who kicked into that gear by climbing out of a sick bed and scoring 31 points with six three pointers against the Knicks, sighed.

“Who said it would be easy?” James said.

It may have just gotten a lot harder.