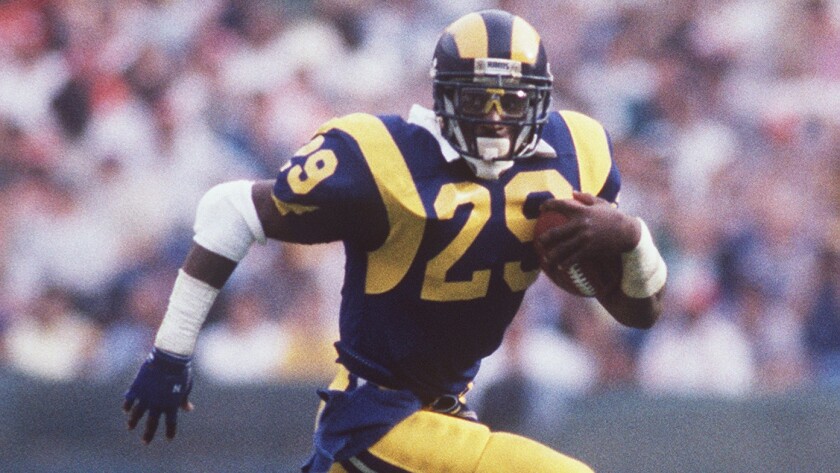 Column: Tales from the NFL: Eric Dickerson’s record run in his own words

The NFL is celebrating its 100th season, and there are many behind-the-scenes stories still to be told. Over the course of this season, Times NFL writer Sam Farmer will pull back the curtain and tell some of those, through the eyes of the players and coaches who lived them.

The mark has stood for 35 years, two years longer than coach Sean McVay has been on Earth. It was 1984 when Rams running back Eric Dickerson rushed for 2,105 yards, setting the NFL’s single-season rushing record.

Dickerson, who at 59 still looks fit enough to play, remembers that season well, from the sluggish start, to the injury that nearly sidetracked him, to those games when he was virtually unstoppable, to the icing on the cake — a cake he neither expected nor wanted.

Here, in his words, are the memories that stand out from that magical season:

The first half of that season, I had some big games, but there were teams that stopped me, too. I had 49 yards against the Steel Curtain in Pittsburgh in Week 3, and 89 yards at Cincinnati the next week. So I wasn’t running for 100 yards every week.

And in Week 8 at Atlanta, even though I ran for 145, I hurt my toe, and I didn’t think I was going to be able to play the rest of the season. People don’t understand turf toe. I didn’t know about it until I had it, and let me tell you something, it is the most debilitating injury. You don’t believe me? Get it, and you’ll see what I’m talking about. It’s the most painful injury I’ve ever had. You can’t push off your toe. You can’t even touch it. I had to get it injected, and they had to drain it. Oh, man.

But I played the next week. Our equipment guy took me to an orthopedic specialist who made me a toe piece that I wound up playing my whole career in. I couldn’t run without it. It was something that I taped to my toe and it took the pressure off. It was about eight inches long and three inches wide, curved to my toe, and took the place of my toe joint. I still have it at home.

Vince Ferragamo had gotten hurt and Jeff Kemp was our quarterback, so I always saw a lot of eight-man fronts. We still found a way to run the football, though, and effectively. We had a great offensive line.

I always liked to hear the defenses talking. They’d say, “You ain’t going to get no 100 yards on us.” For me, I didn’t really talk until I got frustrated or pissed. I’d run over a guy or run past him and I’d go, “Oh, I thought you were going to stop that.”

It’s funny when you’d hear guys out there on defense arguing. The secondary would be arguing with the defensive front: “Man, y’all better stop him up there!” And then the guys up front would say, “Man, y’all got to make some tackles too!” When they’d start arguing, I was like, “Oh, we got ‘em.”

A lot of buzz was building around the country that year. That was the same time as the Showtime Lakers. I went to my first Laker game around then and I sat with Dr. [Robert] Kerlan. He had seats on the floor. I met Magic [Johnson], and just before the game was about to start the crowd gave me a standing ovation. I was so embarrassed. I still don’t like that kind of stuff. But it was fun. All the guys came over. Kareem [Abdul-Jabbar], Byron Scott, Michael Cooper, James Worthy. I met all of them right there on the floor.

But one of the things I remember most came at the end of the season. Adidas was my shoe sponsor, and I had heard that Walter Payton had gotten a Lamborghini for breaking Jim Brown’s all-time rushing record. The guys on my team were like, “Man, they might get you a Ferrari or a Porsche or something.” I don’t know what we were thinking.

This is right before we played the Giants in the playoffs — man, we should have won that game but that’s for another day — so Adidas came over to make a presentation right before we’re about to go out to practice. They’ve got this huge cake. Like a big birthday cake.

The guys were joking they must have baked a set of car keys into the cake. I couldn’t believe it. Walter got a Lamborghini from Kangaroos, and I got a freaking carrot cake.

And the worst part? I hate carrot cake. I’m allergic to nuts.