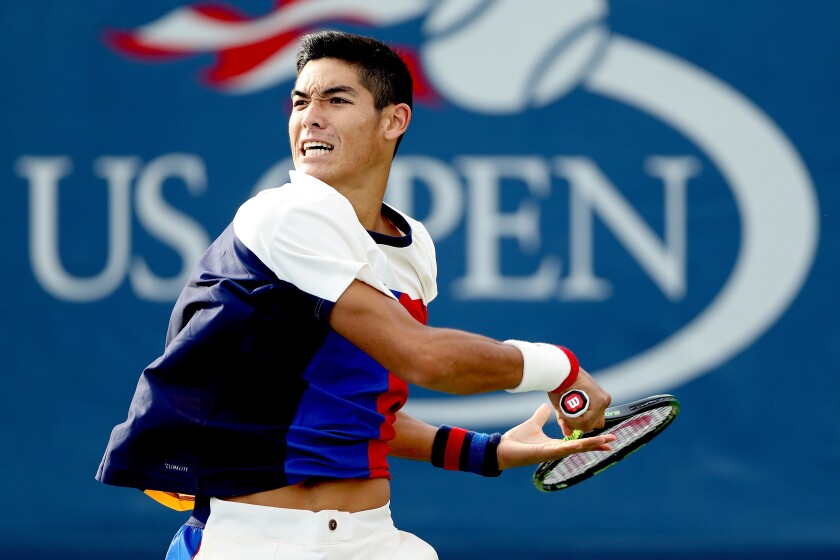 Thai-Son Kwiatkowski was feeling overwhelmed by a run of terrible luck.

The 2017 NCAA men’s singles tennis champion for the University of Virginia was injured at the end of last year and didn’t play well at tournaments in Australia last month. He began to question himself and whether he should bother competing at the Oracle Challenger event last week at Newport Beach.

To make things worse, his girlfriend dumped him two weeks ago. No surprise, then, that his preparation for the tournament went poorly and he had to dig deep to find motivation to take the court at the Newport Beach Tennis Club as an unseeded long shot.

“I actually think not having a lot of expectations helped the first few rounds because I was not really thinking about tennis and just kind of swinging,” he said. “And then I started getting some confidence. Tennis is a weird sport, you know? When you have confidence and a couple things go your way, upsets like this can happen.”

A big server who covers the court quickly and well, Kwiatkowski surprised the field and himself by winning the tournament, capping it Sunday with a few tears and a 6-4, 6-1 victory over Daniel Elahi Galan of Colombia. He will receive $21,600 and points toward earning one of two wild-card berths given to American men at the BNP Paribas Open next month at the Indian Wells Tennis Garden. With one event left in the Challenger Series, he’s second to former UCLA standout Marcos Giron.

“I haven’t had a lot of confidence,” said Kwiatkowski, son of a Vietnamese mother and Polish American father. “So to come and have this week, it’s an amazing feeling. It validates what I’m doing day in and day out with the hard work I’ve put in, in the offseason.”

Kwiatkowski, who will be 25 next week, is ranked 271st in the world. Jumping from college, where he also won three consecutive NCAA team titles, to the pros was tougher than he had anticipated.

“Financially it’s tough in the beginning and you want to do things the right way, like you did in college. We had multiple coaches, a full-time physiotherapist and everything in place to help you succeed, and as soon as you get on the tour all that is gone and you have to fund that yourself,” he said. “I struggled with that for a while, I struggled with motivation, I struggled to want to do it on my own. I was able to build a team around me similar to what I had in college and that’s been really helpful.”

Delaware native Madison Brengle, coming back from a broken heel last year, won the women’s championship with a 6-1, 3-6, 6-2 victory over Stefanie Voegele of Switzerland. Brengle, who peaked at No. 35 in the world in 2015 and was No. 95 last week, used her strong backhand to go up a break at 3-1 in the third set and broke again for 5-1. She earned $24,000 for capturing her first Women’s Tennis Assn. title. Prize money was the same for men and women but was allocated differently by the men’s and women’s tours.

“I lost a couple of tough matches on my Australia trip so stringing this many together and playing well, it just started to click,” said Brengle, who lost in the second round of qualifying at Brisbane and Hobart. “I tried to be kind to myself a little bit because I’ve been out from the U.S. Open ‘til the end of the year. It was kind of understandable maybe that I didn’t close out some matches to start, because I hadn’t played for a while. I felt good. I feel good.”

Brengle and CoCo Vandweghe are the leaders for the two American women’s wild-card entries at Indian Wells.

“We’re going to keep trying,” said Brengle, who began working with coach Carsten Ball last week and credited him for her success here. “If I play [qualifying], if I play main draw, either way it’s just such a good tournament to play. I’m not really complaining. If you’re there, things are going OK.”