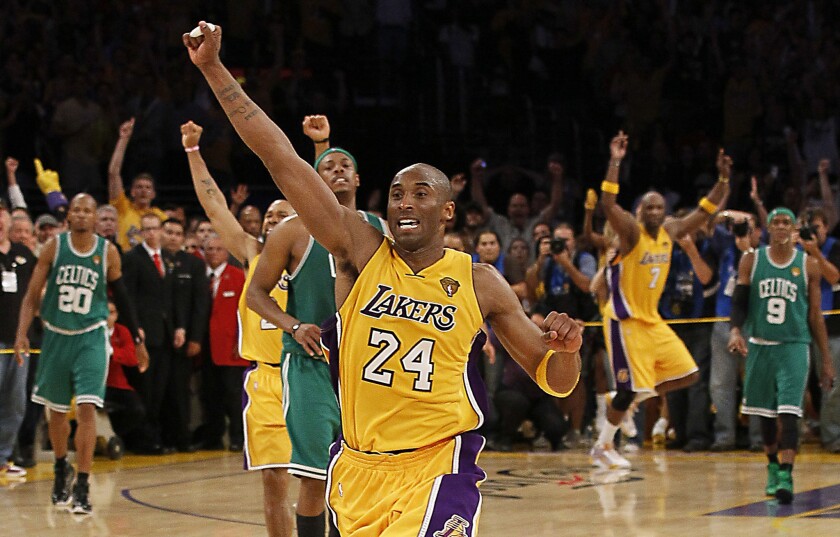 Staples Center will celebrate its 20th anniversary on Thursday. The home of the Lakers, Kings, Clippers and Sparks opened Oct. 17, 1999 with a concert by Bruce Springsteen and the E Street Band. Springsteen famously christened the building with four shows but never returned again after complaining about the arena’s acoustics. Staples Center, however, has done just fine without “The Boss” and has served as the stage for some of Los Angeles’ biggest moments over the past two decades.

The arena unveiled it’s top 20 moments to commemorate its birthday and it featured many non-sports events such as Grammy Awards performances, memorial services for Michael Jackson and Nipsey Hussle, Taylor Swift getting a banner after a record 16th sellout and WrestleMania. The list, which was voted on by fans, left out some significant sports events so here’s a more focused list of the top 20 sports moments in Staples Center history.

20. The Clippers win a playoff series, the franchise’s first in 30 years, beating the Denver Nuggets in the first round (May 1, 2006)

For the first time since they were the Buffalo Braves in 1976, the Clippers won a playoff series. They nearly played the Lakers in the arena’s first “Hallway Series” in the next round but the Lakers blew a 3-1 series lead against the Phoenix Suns. The Lakers and Clippers have yet to play each other in the postseason.

Bryant’s 81-point game gets all the attention but he almost scored that much one month earlier when he single-handedly outscored a Mavericks team that advanced to the NBA Finals that season. Bryant played just 33 minutes and sat out the fourth quarter with the Lakers up 95-61.

Griffin dunking over a Kia as Baron Davis fed him the ball through a sunroof was one of the greatest moments in Clippers history up to that point.

Pastrana’s groundbreaking double back flip was the highlight of the Summer X Games’ run in Los Angeles from 2003 to 2013.

Selling out Staples Center within an hour was a turning point in the multi-billion-dollar world of esports.

During a 72-hour stretch Staples Center hosted six playoff games: two each by the Kings, Lakers and Clippers. As if that weren’t enough the Tour of California featuring 120 cyclists concluded in front of Staples Center.

The high-water mark of the Clippers’ “Lob City” era was Chris Paul’s winner to knock off the defending champion Spurs.

Amidst the controversy surrounding Donald Sterling’s racist comments, which led him being permanently banned and selling the team, the Clippers defeated the Warriors in a dramatic Game 7.

De La Hoya has a statue outside of Staples Center but lost his one and only fight at the arena.

Leslie missed a dunk attempt in the first WNBA game in 1997 but five years later she would complete the first dunk against the Miami Sol on her way to leading the Sparks to back-to-back titles.

L.A. was the center of the basketball universe in 2001 and 2002 as the Lakers and Sparks won their respective championships.

After falling to the Houston Comets in the conference finals the previous two season, the Sparks won their first championship with a two-game sweep of Charlotte.

Bryant finished his 20-year career in spectacular fashion as he became the oldest player in NBA history to score 50 or more points in a game.

Only Wilt Chamberlain’s 100-point game tops what Bryant has called the “masterpiece” performance of his career.

Robert Horry’s improbable buzzer-beater off a tip from Vlade Divac not only defeated the Kings but saved the Lakers’ championship hopes as they went on to win their third straight title.

Bryant’s lob to O’Neal to cap the Lakers’ 15-point fourth quarter comeback against Portland and send them to the NBA Finals is one of the greatest moments in Lakers history.

The Kings won their second Stanley Cup in three years and became the first team to win three Game 7s on the road in the process.

The Kings won their first Stanley Cup and became the first eighth seed in North American professional sports history to win a championship and the only team to win the Stanley Cup after defeating the conference’s first, second and third seeds in sequence.

After falling short the previous three seasons at the Forum, Bryant and Shaquille O’Neal won their first of three straight championships together in Staples Center’s first year. It was the Lakers’ first championship since 1988 and the first of five the Lakers have won in their new home.

Lakers. Celtics. Game 7. What more could you ask for? It wasn’t Kobe Bryant’s best game but whenever he gets his statue outside Staples Center, the image of Bryant standing on the scorer’s table with both hands outstretched after the game should be immortalized.