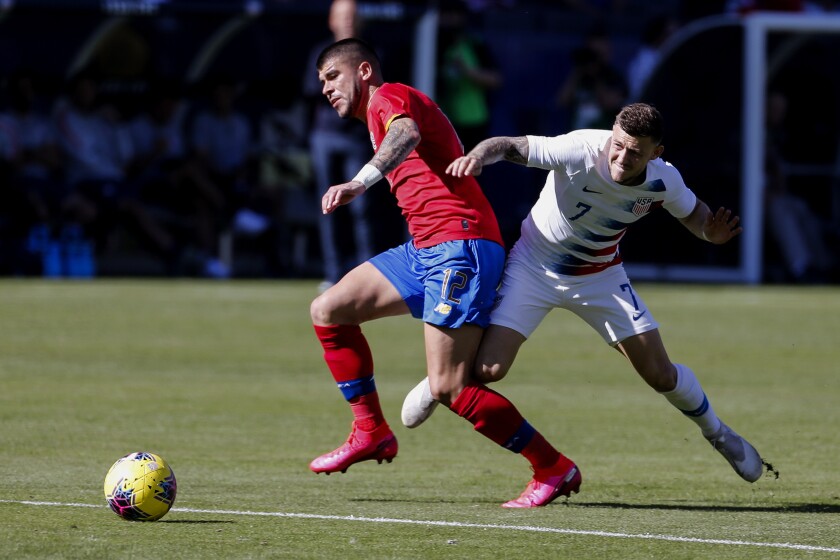 The lone conclusion that could be drawn from the national team’s 1-0 victory over Costa Rica is that U.S. Soccer should reduce ticket prices for January exhibition matches. With an official crowd count of 9,172, Dignity Sports Health Park looked as it was hosting a Chargers game boycotted by fans of the visiting team.

This isn’t the time to be looking for definitive answers. With its best players in Europe, the U.S. has used its four-week winter camps to identify prospects, a priority that was reflected by the youthful roster it fielded against Costa Rica.

Only now, the absence of clarity is a source of widespread anxiety.

The national team is only two years removed from missing the World Cup and still hasn’t offered any assurances the worst-case scenario won’t unfold again.

The qualification process for the 2022 World Cup starts Aug. 31.

In theory, missing the previous World Cup presented the U.S. with an opportunity to get a head start on the following four-year cycle. Somehow, the opposite happened.

Carlos Cordeiro became the president of U.S. Soccer in February 2018 but didn’t hire coach Gregg Berhalter until December of that year. The delay cost Berhalter 10 months to implement a new system, which produced mixed results over the first year, including the team’s first loss to Canada in 34 years.

Berhalter should be entering his third year as the team’s coach but instead is starting only his second. Plenty of questions remain about him and his ambitions of changing the way the U.S. plays.

Unlike tactically incompetent predecessor Jurgen Klinsmann, Berhalter has introduced clear ideas and a resolve to stick with them.

“We came in with a plan of what we want to develop in this camp,” Berhalter said. “We continue to develop that. We picked the profile of [the players] based on what we’re looking to achieve in this camp.”

In other words, he called in players who could play the kind of possession-oriented style he envisions.

Whether that will be effective is an entirely different question.

Costa Rica certainly didn’t present much of a test, dropping back and conceding the ball to the U.S.

“When a team has 11 players within 30 yards set up in a low block, that’s the most difficult thing in soccer,” Berhalter said.

The U.S. adjusted, sending up its outside backs to get behind the opposing back line. Left back Sam Vines danced around his marker and dribbled into the penalty box in the 33rd minute. Right back Reggie Cannon received a pass from Paul Arriola near the end line and was taken down from behind by substitute midfielder Randall Leal in the 48th minute.

The foul on Cannon resulted in a penalty kick that was converted by 18-year-old Ulysses Llanez.

Vines, Cannon and Llanez were three of six players who will be eligible to play on the under-23 team in Olympic qualifying tournament in March.

The U.S. has failed to qualify for the previous two Olympics.

The United States’ depth has improved, but that shouldn’t be mistaken with high-end talent. This country still hasn’t a produced a striker who would be an obvious upgrade from Jozy Altidore or a midfielder who could push out Michael Bradley.

What the country has for the first time is a legitimate world-class attacker in 21-year-old Christian Pulisic, who plays for Chelsea of the English Premier League.

And questions have now emerged about the resiliency of Pulisic, who is currently sidelined with a torn thigh muscle. Pulisic also missed time last year with various muscle injuries.

Berhalter doesn’t really have a choice. Pulisic is the United States’ only game-changer. Without him, the U.S. won’t make the improvements the federation has long promised. It won’t matter who is coaching the team.