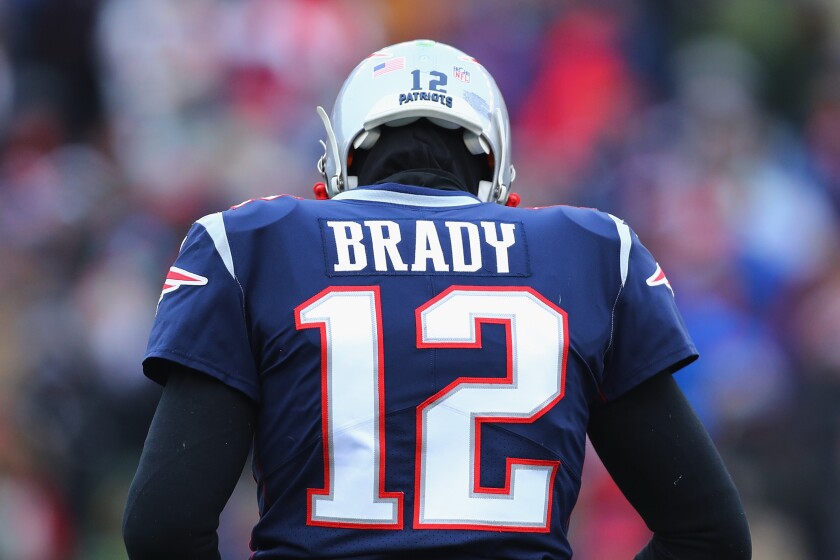 Column: These NFL blunders have been amplified by social media

The NFL regular season is approaching the halfway mark, and already the red Solo cup of half-witted decisions runneth over.

Everybody makes mistakes, bad calls, errors in judgment, and these days they’re amplified by social media and the intense spotlight of scrutiny, but some of these are doozies.

Take, for instance, the fellow accused this week of swiping a signed Tom Brady jersey and other memorabilia from the New England Patriots Hall of Fame exhibit at Gillette Stadium.

The quarterback’s jersey, which the Attleboro Sun Chronicle said was valued at $10,000, already was under watchful eye, considering one of those was stolen from his locker after the Super Bowl in 2017.

But the fellow this week allegedly absconded with it, along with a blue glove, and was nabbed in the stadium parking lot as he was leaving, police said. Police are pretty sure they got the right guy; he was wearing the jersey under his jacket, they said, and kept it on for his mugshot. Caught, blue-handed.

Some moves only seem criminal. Consider the NFL rule change this season to make pass interference subject to review. Turns out, the league isn’t keen at all about overturning calls made by field officials. So far, the system is arbitrary and unsatisfying.

“Replay, in my mind, should be there for a very egregious situation that was just blatantly missed,” Cowboys owner Jerry Jones said earlier this month on 105.3 FM The Fan in Dallas. “But to have it on every play and the will of the coach to make those calls and have it done that way is really kind of not as succinct as I’d like to see officiating.”

Saints fans won’t soon forget the pass interference that wasn’t called on the Rams in the NFC championship game. Nor will they soon forgive Buffalo Wild Wings, which, after Drew Brees was injured in this season’s game against the Rams, tweeted: “New Orleans fans already drawing up lawsuits.”

Who Dat Nation went crazy after that one, threatening to boycott the restaurant chain. A local franchisee might have summed up his sentiments about the tweet in two words: Gee, thanks.

“I’m a nine-year Saints season ticket holder,” Amit Patel, owner of three Buffalo Wild Wings franchise locations in the New Orleans area, told Nola.com. “That tweet in no way reflects our feelings. We are locally owned, we’re part of the Who Dat Nation, we love the Saints.”

So raise a beer to Patel, who never dreamed he’d have to backpedal for corporate like an All-Pro corner. Just don’t buy that beer at a Miami Dolphins game. It was there, during his team’s loss to the Chargers, that a fan received an alert on his phone from his credit card company notifying him of a $725 charge.

That’s how much a walking vendor charged him for two beers at the game. The savvy scammer was arrested for using a Square reader separate from the system used by the stadium company, and was held on a $10,000 bond — or roughly the cost of a case of his own beer.

Not all beer-related accusations are legit. Take the case of Cleveland Browns fan Eric Smith, who was mistakenly identified by the team as the person who threw a brew at Tennessee’s Logan Ryan during a season-opening loss to the Titans. After the misidentification, Smith was banned from the stadium.

It seems Smith was at home at the time, watching the game with his family and preparing to DJ a wedding the same day. The Browns privately apologized to Smith and issued a statement later in the week saying they had not “explicitly identified the individual or taken any formal action of punishment.”

Had Smith actually been able to douse the player from his home, that’s quite an arm.

Usually, there’s no mistaking the culprit, as in the case of Oakland linebacker Vontaze Burfict, who was ejected from the Raiders’ game against the Indianapolis Colts for lowering his head for a late hit on tight end Jack Doyle. Burfict smiled and blew kisses to the Indianapolis crowd as he jogged off the field and up the tunnel, not knowing the league would suspend him for the rest of the season.

Burfict should have taken his cue from Oakland punter A.J. Cole, who, before an exhibition game in Canada, appeared on the Raiders’ Twitter account wearing a T-shirt that read “Winnipeg, Alberta.”

Problem is, Winnipeg is located in the province of Manitoba. Canadians were quick to remind him of this — politely, of course. And Cole took the ribbing in stride, tweeting: “apologies to the citizens of Winnipeg, Manitoba … just a kid from Atlanta, Florida playing football in Oakland, Nevada with a low geography IQ.”

Often, after a boneheaded mistake, a prompt apology does the trick. Cody Barton, a rookie linebacker for Seattle, was falling all over himself apologizing to Pete Carroll after nailing the coach in the face with a football just before a home game against the Saints. Barton was trying to toss the ball to an assistant coach, but instead bloodied Carroll’s nose.

“He’s been penalized severely,” the coach joked a few days later. “He has to live with that. I’m hanging it over him too. He’s apologized profusely.”