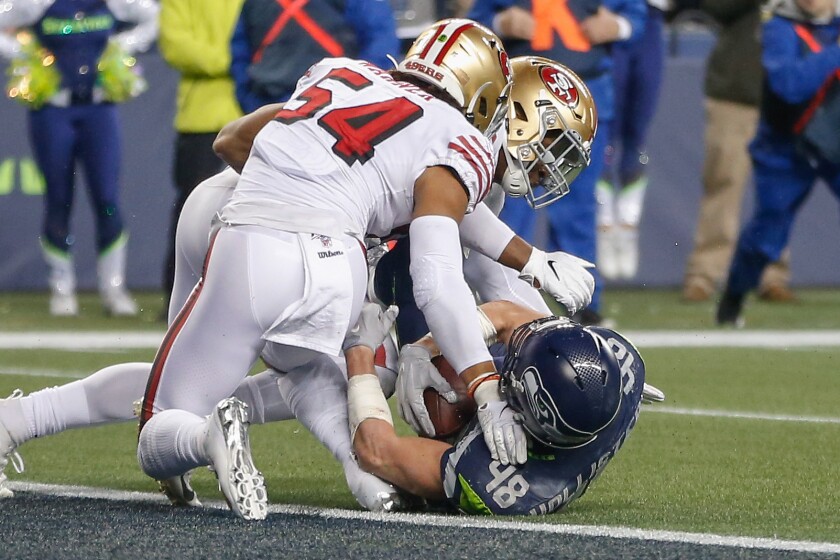 Fans of the Kansas City Chiefs burst into cheers when their team scored its final touchdown Sunday, the knockout blow for the Chargers.

But those fans cheered another touchdown even more: Miami’s last-second score at New England. The Dolphins stunned the Patriots, and it proved to be a major setback for the defending Super Bowl champions.

New England and Kansas City swapped seedings — the Chiefs finished second, the Patriots third — with the top two seeds getting a first-round bye.

It’s no wonder those fans in Arrowhead Stadium were going crazy, essentially breaking the good news to Chiefs coach Andy Reid and his players.

“The fans were hollering,” Reid said, “so I figured something good was happening.”

Later Sunday night, San Francisco stopped Seattle inches from the goal line and held on for a 26-21 road win that reshaped the NFC seedings.

The 49ers clinched the No. 1 seed for the first time since 1997, and will get a first-round bye along with second-seeded Green Bay.

The AFC games will take place Saturday, with Buffalo at Houston on ESPN at 1:30 p.m. PT, and Tennessee at New England at 5:15 p.m. on CBS.

For the Dolphins, the 27-24 upset came against a New England team that in Week 2 humiliated them in Miami 43-0.

The Patriots have won six Super Bowls, but in each of those instances were either the first or second seed. Never have they run the four-game gantlet to hoist the Lombardi Trophy.

In facing the Titans, Patriots coach Bill Belichick will be squaring off with one of his former players, Tennessee coach Mike Vrabel.

It was a 35-14 postseason loss to the Patriots that served as a final straw for Mike Mularkey in Tennessee two seasons ago, clearing the way for the Titans to hire Vrabel.

That was the Titans’ most recent playoff appearance — and the identical score of their game at Houston on Sunday, when they clinched the final AFC berth by blowing out the Texans, who rested quarterback Deshaun Watson.

The Texans already had locked down the No. 4 seed as winners of the AFC South, and will play a Bills team that was 6-2 on the road this season. However, Buffalo lost three of its last four games.

Houston is likely to get back defensive lineman J.J. Watt, who missed the final eight games with a pectoral injury. He has rehabbed his way back from surgery and could be ready to go.

Banged-up Philadelphia was able to hang on to beat the New York Giants 34-17 and claim the NFC East. It marked the 15th consecutive season that division has not had a repeat champion. That’s the longest such streak for any division since the 1970 AFL-NFL merger.

It was the Eagles, in fact, who last won the NFC East in back-to-back years, claiming four titles in a row with those Reid/Donovan McNabb teams from 2001-04.

New Orleans rolled over Carolina 42-10, but ultimately it was a disappointing day for the Saints, who didn’t get help from Seattle or Detroit (which played Green Bay) and therefore have to play a first-round game.

“Obviously,” Saints quarterback Drew Brees said, “it was a strong year in the NFC.”

The last time the Vikings and Saints met in the playoffs, the finish was a classic. On the last play of a divisional game two years ago, Vikings quarterback Case Keenum threw a 27-yard pass to Stefon Diggs, who made the catch along the sideline, turned upfield and turned the play into a 61-yard touchdown for the victory. The moment is now known as the Minneapolis Miracle.