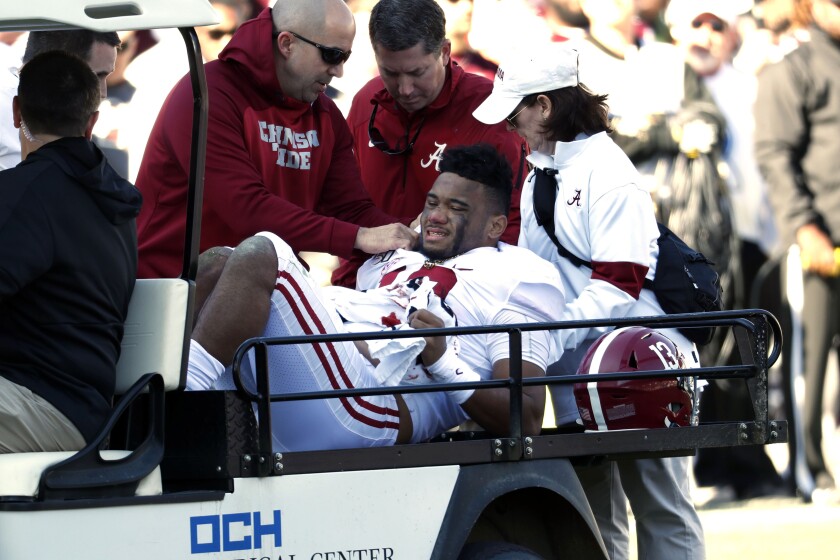 One of the criticisms of California’s “Fair Pay for Play Act” and similar bills being floated in state legislatures across the country is that only a select handful of players would have the power in the marketplace to earn significant compensation from the use of their name, image and likeness.

Tua Tagovailoa is one of those special young men. No matter what the specific wording of state laws, federal law or the eventual NCAA attempt at a rule change on NIL, we can all agree that Tagovailoa, the best quarterback in University of Alabama history, would already be worth millions of dollars if he were allowed to cash in on his fame, talent and handsome face.

For anyone who loves college football yet wants to enjoy it without near-constant ethical dilemma, Tagovailoa suffering a dislocated hip injury that will end his season and possibly affect his NFL draft stock and long-term ability to play at a high level is a punch to the gut.

“Tank for Tua” has been the theme of the Miami Dolphins’ season. For anywhere from $20-30, you can purchase a variety of T-shirts featuring that catch phrase. Will Tagovailoa receive a dime of that money? You know the answer.

When will this end? It’s criminal.

As soon as Tagovailoa went down in pain late in the second quarter of No. 5 Alabama’s 38-7 victory over Mississippi State on Saturday, people lashed out at Alabama coach Nick Saban for having started Tagovailoa to begin with.

The quarterback from Honolulu has already been injured once this year, suffering a high ankle sprain against Tennessee on Oct. 19. He had surgery and predictably made it back for last week’s “Game of the Century” against No. 1 Louisiana State in Tuscaloosa. Tagovailoa performed admirably under the circumstances, as he always has, throwing for 418 yards and four touchdowns in a 46-41 loss. After the game, he walked off the field with a noticeable limp, and, entering this game against an overmatched opponent, it was left up in the air until kickoff whether he would play.

Of course, he did. And he looked perfectly fine until a totally separate injury brought him to the turf in Starkville, screaming in pain with a bloody nose. The Crimson Tide were up 35-7 at the time, so it was debatable whether Tagovailoa should have been playing given his ankle.

Blame Saban for putting his best player at risk if you want, but don’t ignore the systemic issues that have not trained coaches to put players first for generation after generation — and a College Football Playoff subjective ranking system that puts emphasis on passing the “eye test” every week.

After the loss to LSU, Alabama fell only to fifth and was set up well to revive its playoff hopes as long as it won out and looked pretty good doing it. Sure, Alabama wasn’t going to risk a close win or, heaven forbid, a loss at Mississippi State if Tagovailoa was able to go. With a legacy-defining national championship run still in play, of course a competitor like him was going to be willing.

Now, we’re left with that familiar feeling that something is very wrong with our Saturday ritual. We can do better for transcendent athletes like Tagovailoa than tuition, room and board and full cost of attendance. If the Alabama backup left guard can’t earn what Tua can in the open market from endorsements, autographs, staging his own football camps, etc., then Tagovailoa can take him out for a few steak dinners on the Strip in Tuscaloosa.

We don’t know how serious this injury and recovery will be. Maybe he will still be a top-five pick and get those millions that he is certainly worth when he’s healthy enough to read a defense and sling a football. Even then, that doesn’t erase the reality that Tua and the few players of his caliber have put everything on the line for schools that have created a system that does not protect their interests.

These state legislature NIL bills may not fully solve the problem. But they would at least put an end to this.

There were supposed to be three games Saturday with legitimate playoff impact: No. 4 Georgia at No. 12 Auburn, No. 8 Minnesota at No. 20 Iowa and No. 10 Oklahoma at No. 13 Baylor.

Yet, Tagovailoa’s season-ending injury could have the biggest reverberations the rest of the season.

Georgia’s 21-14 win at Auburn was impressive and gives the Bulldogs a third resume builder, along with victories over Notre Dame and Florida. But ultimately, all it did was keep the Bulldogs alive. They still would have to beat No. 1 LSU in the Southeastern Conference title game to make the playoff.

Minnesota’s 23-19 loss at Iowa will require the Golden Gophers to knock off No. 14 Wisconsin in the regular-season finale to win the Big Ten West division. Even if Minnesota pulls that off, it would have to beat No. 2 Ohio State in the Big Ten title game to make the playoff.

The winner of the Big 12 battle will have more work to do, including beating the loser again in the league title game.

Alabama losing Tagovailoa probably will keep the Crimson Tide from sneaking in through the back door of the playoff. The selection committee can’t reasonably make a case that Alabama without Tagovailoa is one of the top four teams — plus, it could very well lose at Auburn in the Iron Bowl.

That opens the front door even wider for No. 6 Oregon or No. 7 Utah to blast through in the event of LSU, Ohio State, Clemson or Georgia falling out of contention in the next three weeks. (If LSU loses to Georgia in Atlanta, it would likely remain in the playoff, so Pac-12 fans should root for the Tigers.)