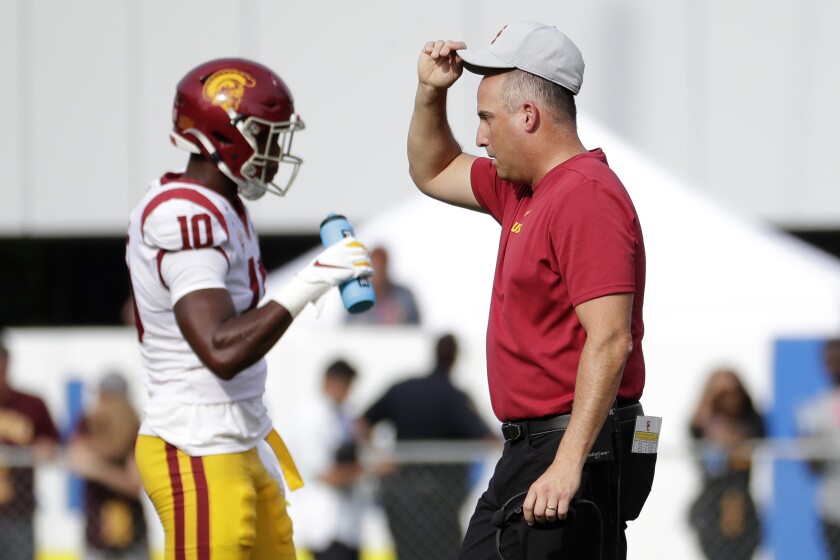 Column: USC’s Clay Helton is not about to throw in the towel

Before the hero of the game could depart the field at Sun Devil Stadium on Saturday, Clay Helton wanted to share a moment with him.

Helton embraced defensive end Christian Rector, placing a hand on the fifth-year senior’s head while whispering into his ear how proud he was of him. Rector had preserved USC’s 31-26 victory over Arizona State by deflecting and intercepting a pass in the final minute.

“That’s what captains do,” Helton said.

Rector smiled and continued in the direction of the locker room. A wave of players followed. Helton clasped hands with receiver Amon-Ra St. Brown.

As speculation over his future intensified, as the demands that Urban Meyer be made the next coach became louder, as Mike Bohn was officially appointed the university’s athletic director, Helton made a simple demand of the players.

“Do your job and take care of your family,” Helton said.

The reality is that the victory didn’t change Helton’s destiny. The details of how USC nearly blew the 28-7 advantage it built in the first quarter reinforced that USC will almost certainly have a new coach next season.

And regardless of how the remainder of the season unfolds, this year will be considered a disappointment for the Trojans.

The destination is not subject to change. The journey, however, is.

By following Helton’s example, by soldering on against the backdrop of mounting criticism, these Trojans were able to experience something special Saturday.

They won on the road in front of a raucous crowd.

They won their sixth game, which made them bowl-eligible.

“Bowl game!” safety C.J. Pollard screamed as he bounced by an interview room, where reporters waited for Helton.

The distinction was significant because the Trojans failed to earn it last year.

“We’ve talked about it this week,” Helton said. “These three games last year were the difference.”

This game against Arizona State was USC’s third-to-last game of the season.

There was adversity on the road to victory.

Some of that was self-induced. The Trojans couldn’t defend kickoff returns or refrain from committing untimely penalties, which have become trademarks of Helton’s teams.

But there were elements of misfortune as well. Freshman quarterback Kedon Slovis sat out two series because of cramping. Center Brett Neilon was injured. Tight end Erik Krommenhoek, defensive lineman Caleb Tremblay and receiver Tyler Vaughns were, too.

“With a lot of bodies down, bodies that didn’t start and losing bodies during the game, not only did they fight on, they fought on to victory,” Helton said. “That’s our motto.”

The phrase echoed words used by Bohn at his introductory news conference Thursday.

Progress also emerged in other forms.

In his return to the area in which he was born and raised, Slovis passed for 432 yards, including 297 in the first quarter.

In addition to scoring touchdowns on receptions of eight and 58 yards, freshman running back Kenan Christon had a career-high 20 rushing attempts.

Helton made the case that if the team remained on this path, there would be more games like this.

“The season isn’t over,” he said. “There’s a lot of it left. Some people want to write us off, but don’t write us off quite yet. This team is going to keep on winning ballgames and keep on fighting.”

USC is half a game behind Utah in the Pac-12 Conference South.

“We’re bowl-eligible, but we have higher standards,” Helton said. “We have more to play for. We have two games left and next week could be win No. 7. The following could be win No. 8. If Utah slips up, can you go get No. 9? Or No. 10 in the bowl game? We’ll keep on fighting each week until they tell us not to anymore.”

Along the way, Helton hopes he can be an example to the young men under his guidance.

“At the end of the day, I always believed, when you’re a head coach, you’re a servant — a servant to your kids and a servant to your university,” he said. “This university has been great to me for 10 years and the people of it have been great to me. These kids, each one of them, I’ve signed. So they’ll get my absolutely best effort, as well as our staff’s. That’s what servants and educators and coaches do, and, hopefully, that rubs off on the kids and they learn some life lessons from it.”

They have. Saturday was evidence of that.