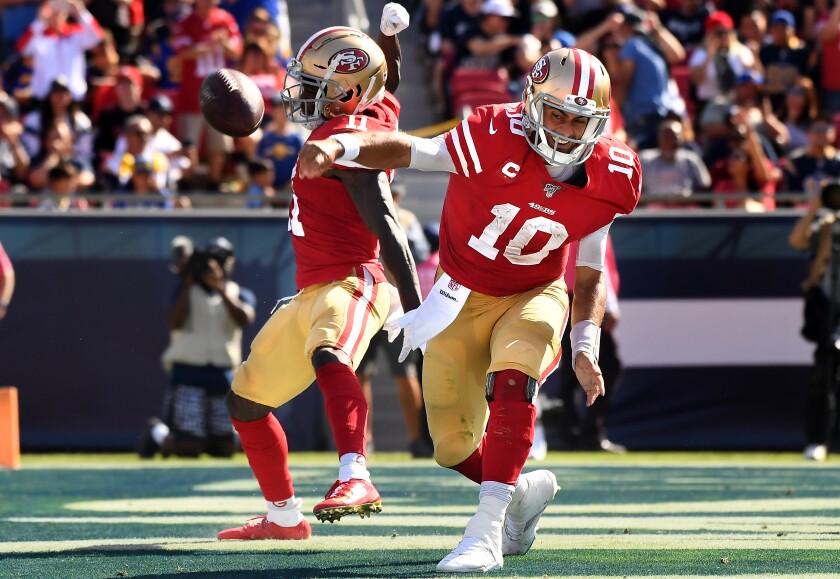 Column: Unbeaten 49ers soundly show the Rams they are a real power in NFC West

What’s garbage to the Rams is gallery-worthy to the San Francisco 49ers.

For the NFC’s only undefeated team, the stat sheet from Sunday’s 20-7 victory is suitable for framing.

Sure, there’s plenty of video to study from this game, but wouldn’t it be easier to look at the chalk outline?

In case there were lingering doubts about the legitimacy of their unblemished start, the 49ers made a convincing case Sunday with their most dominant outing since the glory days of Jim Harbaugh three coaches ago.

“It’s business as usual,” cornerback Richard Sherman said with a shrug. “The previous performances should have been enough to give these guys the respect they deserve. … Everybody’s disrespecting us with, ‘Oh my God, it’s going to be a tough game.’ But we came in here without both our starting tackles, without our starting corner, we lost our nickel in the middle of the game, without our fullback.

“We could make every excuse in the world, but we don’t. We just go out there and execute at a high level.”

Everybody knew that the 49ers were rebuilding from the ground up, with coach Kyle Shanahan and general manager John Lynch implementing the blueprint they rolled out with their arrival in 2017, but that is some fast-drying cement. The team that hasn’t finished in the top half of its division since 2013 is suddenly the ogre of the NFC West.

Yes, this was only one game, and the Rams were without Todd Gurley on offense, and Aqib Talib and Clay Matthews on defense, but this was a beatdown. San Francisco’s defensive front dominated, exposing foundational cracks in the Rams offensive line that will be hard to patch. This isn’t a matter of making a tweak or two for a team that has lost three games in a row for the first time in the era of coach Sean McVay.

This game had a weird start. With Gurley watching in street clothes because of his bruised thigh, the Rams were determined to impose their will early. So they opened with seven consecutive runs, scoring on a Robert Woods scamper around the left side. It was the first rushing touchdown against the 49ers this season.

It was also a punch in the mouth to the NFL’s second-ranked defense in points given up.

“It definitely hits you on a personal level, especially when we play really good run defense,” defensive tackle DeForest Buckner said. “We know they’re a good running team; that’s what they thrive on. … I’m sure a lot of guys took it a little personal.”

The message that reverberated throughout the 49ers defense when the players got back to the sideline: Keep calm.

“There was no panic on the sideline,” defensive coordinator Robert Saleh said. “What we did. What do we need to do? How can we fix this? And guys went out there and still played, kept that relentless attitude.”

(A humorous aside: The Rams ran the ball seven times in a row. But in the aftermath, Shanahan stepped to the lectern and referred to eight straight runs, then Saleh and his players said nine. The number could continue to climb in the retelling, because the 49ers will be talking about this legendary performance for a good while.)

All that pressure up front on Jared Goff allowed the back end of San Francisco’s defense to nullify the excellent Rams receiving corps. There was no sitting back and strafing the secondary with passes to Cooper Kupp, Brandin Cooks and Woods. The Rams’ leading receiver was tight end Tyler Higbee with three catches for 25 yards. The home team’s longest reception was 12 yards by Gerald Everett.

Every team lays an egg now and again, and the Rams were coming off their most complete game despite losing in Seattle, but the team that took the field Sunday won’t scare anyone and without question is the third-best in the division.

The Rams need to get Gurley back, even though he isn’t the same big-play threat he was for most of the last two seasons, and they need to do a better job up front. That’s made even more difficult with the potential loss of left guard Joe Noteboom, who had to be helped off the field because of a knee injury in the first quarter and couldn’t return to the game.

Although the Rams do catch a break the next two weeks, with games at Atlanta (1-5) and against Cincinnati (0-6) in London, followed by a week off, this is a Los Angeles team staggering on wobbly legs.

The 49ers, meanwhile, have gathered a full head of steam with a game at Washington (1-5) next up in their path.

“We can’t worry about what the ‘experts’ say,” Sherman said, using air quotes to emphasize his point. “We just hope that they stick to their words. We want them to sound dumb at the end.”