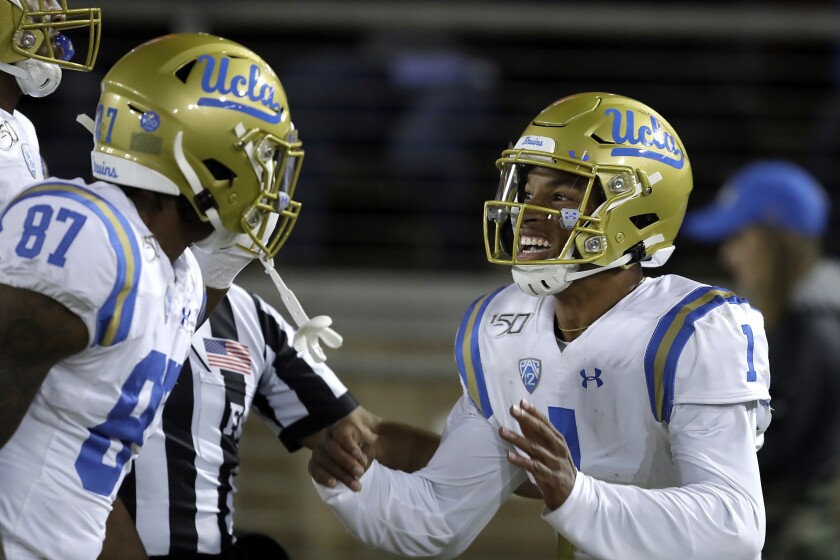 Column: Value of UCLA’s win over Stanford will be measured in the weeks ahead

This was the pool of water on the desert horizon, the billow of smoke on what was believed to be an uninhabited island, the flower sprouting from the crack in the sidewalk.

So what if it came in an empty stadium against a three-win Stanford team starting its third-string quarterback?

This was a 34-16 victory, a triumph on the road. In the context of the 19 games they have played under Chip Kelly, this counted as momentum.

Alone, the win wasn’t worth much, even if it was the program’s first against Stanford in 11 years. The value of this particular conquest will be determined in the coming weeks, by what the Bruins do against the likes of Arizona State, Colorado and Utah.

UCLA has to convert the momentum it gained into actual results.

The inability to do so has been trademark of the Bruins under Kelly. If Randy Johnson was the Big Unit, Frank Thomas the Big Hurt and Glen Davis the Big Baby, Kelly has been the Big Tease. Every time Kelly has looked as if he has had a running start, he’s crashed into a brick wall.

The optimism that radiated from his celebrated appointment translated into only a three-win season last year.

The disappointing year included an upset of USC, but UCLA couldn’t do anything with that, either. The Bruins dropped their season finale to Stanford and opened this year with three consecutive losses.

They overcame a 32-point deficit to take down Washington State, but followed that with crushing losses to Arizona and Oregon State.

Kelly, who has won only five games in his season and a half as UCLA’s coach, contested the idea that victories were the only gauge of momentum.

“We had positive momentum all the time,” Kelly said. “I don’t think the outcome of the game, just because you lost a game, doesn’t mean you can’t get positive things out of it. That’s just not the way it works.”

Pointing to the losses to Arizona and Oregon State, Kelly said, “I think our guys got better over the last two weeks.”

Coaches of two-win teams measure progress on more of a granular level, evidently.

Kelly also debated the definition of success, claiming his players have enjoyed it.

“Even when you lose a football game, there’s successful things they do within the game,” he said. “I think that’s what the teaching process is all about.”

Kelly can talk as much as he wants about the incremental improvements, about how he’s using the sport to teach life lessons to student-athletes, but the reality is that he will be judged based on his win-loss record.

Why he doesn’t want that to be the case is understandable.

The Stanford team the Bruins played Thursday night was severely weakened, as the Cardinal started three freshmen on their offensive line.

Stanford’s third-string quarterback, Jack West, completed fewer than half of his passes and threw for only 143 yards. The Cardinal’s ground game was even worse, as it averaged 1.8 yards a carry.

“I just think it was a correlation — you play good coverage, it helps you in the pass rush,” Kelly said.

Bruins quarterback Dorian Thompson-Robinson completed 21 of 34 passes for 192 yards and two touchdowns. He also rushed for 66 yards and another score.

Running back Joshua Kelley rushed the ball 18 times for 176 yards and a touchdown.

“I’ve seen that from our offense in the weeks since the Washington State game,” Kelly said.

Kelly refused to celebrate the end of UCLA’s 11-game losing streak to Stanford.

Kelly responded to a question about the streak by The Times’ Ben Bolch with a question of his own.

“I wasn’t,” Kelly said with a smile. “I was an assistant coach and most of these kids were 6 and 7 years old.”

But the lighthearted words revealed a sobering truth. When lost in the desert, the oasis in the distance could be a mirage. The failure to temper expectations could lead to further disappointment.