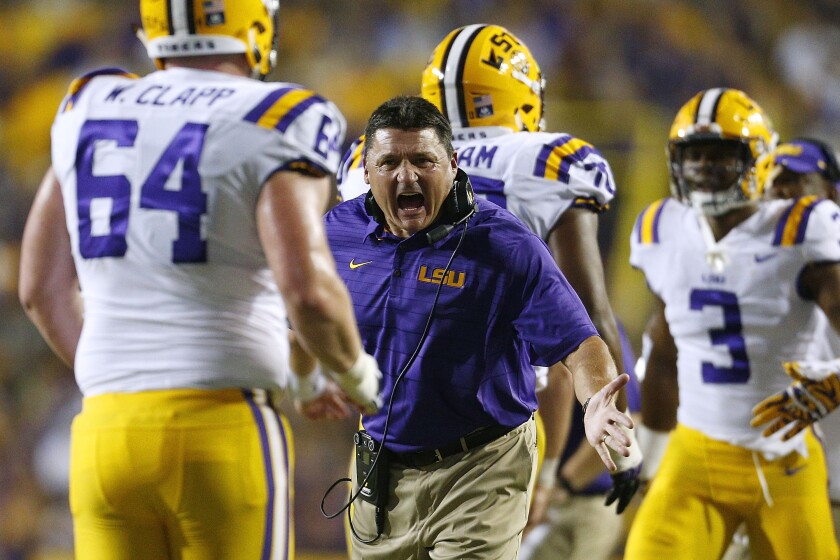 Column: Watching Ed Orgeron fight on with LSU is the hardest thing for USC and its fans

Ed Orgeron has become the gravelly voice of college football, the passionate face of its championship tournament, the most beloved sideline presence in the country.

Six years ago, USC decided he didn’t fit its image.

Orgeron has passionately and tearfully led Louisiana State to the top of the rankings, guided quarterback Joe Burrow to a Heisman Trophy and been named Home Depot college coach of the year.

Six years ago, he holed up in Room 112 of the campus Radisson Hotel and wept after USC told him he wasn’t Trojans head coaching material.

“My heart and soul were so empty, it was like being a father who is told you can’t have your children anymore,” Orgeron said afterward.

Today, it is the USC football program that feels so empty, watching Orgeron flex from afar while the Trojans are stuck with a massively unpopular head coach, a disappointing recruiting class and an increasing number of empty Coliseum seats.

The hardest thing for Trojans fans this winter is not only watching Clay Helton march USC into a blah Holiday Bowl but also witnessing Orgeron shoulder LSU toward a national championship.

After all, Orgeron would be the USC head coach today but for three beliefs that seem bonkers.

Because of his giant lineman frame and emotional sideline demeanor, USC thought he didn’t have the sophisticated appearance of a Trojans head coach.

Because of his deep and sometime unintelligible Cajun voice, USC thought he didn’t sound like a Trojans head coach.

After his loss to a more talented UCLA team in only his eighth game as interim coach in 2013, USC was convinced he didn’t command the focus and discipline required of a Trojans head coach.

Looking back, it all seems so crazy, and it all could have been so much different, if only then-athletic director Pat Haden had possessed the vision to see beyond the trademark Orgeron sweat.

Orgeron took the program on a wild ride that could have changed everything, yet, because of old-school Trojans stereotypes, it changed nothing.

As USC fans stew over the failing state of their program, it’s perhaps worth revisiting the abbreviated Orgeron era to remind them of one of the many ways the Trojans got into this mess.

Orgeron was an assistant who became head coach in late September of that 2013 season after Lane Kiffin was famously fired on an airport tarmac.

Orgeron led the Trojans to a 6-2 record in eight of the most emotionally charged games since the Pete Carroll era.

Then, two days after losing to UCLA in the season finale, he was told the Trojans were hiring Steve Sarkisian as the permanent head coach, a move that upset Orgeron so much he immediately resigned and flew home to Louisiana.

When introducing Sarkisian, a former Trojans assistant, Haden said: “He knows how to build a program and create a culture that we value. He understands the heritage and tradition of USC.”

Judging from those eight games, he could and should have been saying the same thing about Orgeron.

He bellowed, he hugged, he opened practices to the world, he reinstated desserts on the training table, he won one game with several backups and walk-ons. He was the epitome of the Trojans family.

Yet he never looked smooth, never sounded executive, he was the anti-Haden, the anti-Sark, and thus became an ex-Trojan. That, and he lost not only to UCLA but also to Notre Dame, and some folks think you cannot hire an interim coach who loses to both in the same year.

I was regrettably one of those people, enchanted by Orgeron’s effect but stuck on those two losses. I was supportive of Orgeron. I dutifully chronicled his magic, never agreed with the assessments about his aura, and never called for his ouster. But, in the end, those two losses prevented me from fighting for him.

After the coaching change, I wrote this of Orgeron: “He deserves to be a head coach somewhere, and his passion-driven style would work well in a small market with lower expectations.”

Yeah, like LSU in the Southeastern Conference? Yeah, I was an idiot. The Ed Orgeron era exposed lots of folks as idiots, none of whom were Ed Orgeron.

A year after his departure, Orgeron was kind enough to host me for a weekend visit at his New Orleans-area home, where he was unemployed and still hoping to return to the Trojans.

“That right there, that’s my family forever,” he said.

He meant it. He loved USC. He epitomized USC. This should have been obvious after his first big victory when the Trojans won at Oregon State for the first time in nine years.

After that game, I wrote: “When it ended, Orgeron gathered his players around him for a unique postgame pep talk. They lifted him up. He ordered them to put him down. He then asked them to turn around and stare at the stands of the aging stadium that had spent the last couple of hours shaking. He wanted them to see the mostly vacant seats, a tangible sign of domination, the Trojans having sent the Oregon State fans scurrying into the cool night.”

And, it turns out, that wasn’t even his most dramatic postgame moment. There were more chills after the Trojans beat fourth-ranked Stanford on a last-second field goal by Andre Heidari.

After that game, I wrote: “The deep green Coliseum field turned cardinal and gold, swarmed by thousands of fans, enveloped in thousands of screams, the heart of a Trojan nation beating together in dizzy disbelief.

“In the middle stood one sweating man who was somehow bigger than all of it, his giant white-sleeve arms raised above his giant smile, his massive shoulders carrying this bear of a victory.

“He was rocked, he was hugged, he was loved like no man has been loved here since the early days of Pete Carroll.”

And then he wasn’t, demoted less than 48 hours after the end of a mostly glorious season, and he wasn’t the only one who cried.

Players openly wept. They loved the guy. That compelling scene Saturday at the Heisman Trophy ceremony, where winner Burrow cried while talking about Orgeron’s influence? Six years ago, USC players had talked to me about him in the same tones.

Said safety Su’a Cravens: “Coach O needs to be here next year. ... We want Coach O next year. Forget the hiring, forget all that. We got Coach O, and that’s all we need.”

Said linebacker Hayes Pullard: “Any time you have a father figure like Coach O, he comes in here, treats us like his own, we want to run through a brick wall for him.”

When Sarkisian was dumped in October 2015 because of substance abuse issues, Helton became the interim because Orgeron was no longer on the staff, and the rest is mediocrity.

There has been recent talk that with USC’s stand on integrity, it might not hire Orgeron today because of alleged violent incidents in the early 1990s, including a restraining order filed — and eventually rescinded — in 1991 by a Dade County (Fla.) woman who accused him of repeated violence. But in the nearly three decades since then, his life has been free of similar incidents.

It all came full circle for him recently after what was the biggest win of his coaching career and a game that surely made USC fans shiver.

Following LSU’s 46-41 victory over Alabama on Nov. 9, Orgeron surely took special pride in staring across the field at the Crimson Tide’s offensive coordinator.

Guy by the name of Steve Sarkisian.