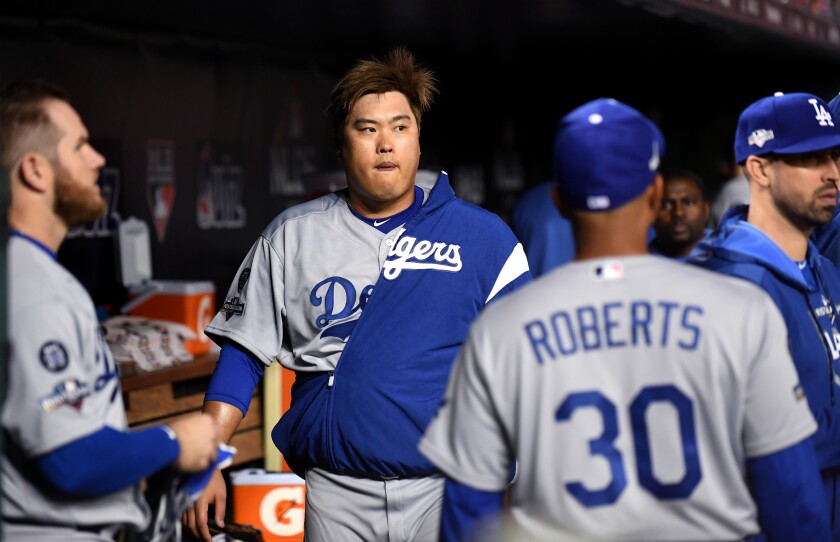 If an elite free agent is available, the Dodgers won’t sign him.

How the Dodgers have managed to lower expectations to this point is truly remarkable, considering they have a television contract worth more than $8 billion.

You would think they might have slipped and accidentally signed someone to a big contract by now, but, no, Mark Walter and his partners at Guggenheim Baseball Management are committed to a philosophy that is bound to disappoint their curiously loyal customers every offseason.

The team’s behavior this offseason has been particularly alarming. A period that started with a failed pursuit of Gerrit Cole became downright sad over the weekend when longtime Dodgers starter Hyun-Jin Ryu accepted a four-year, $80-million offer from the Toronto Blue Jays. No elite free-agent pitchers remain on the market.

Never mind improving the team. As they stand now, the Dodgers have a worse roster than they did last season.

The last time something like this happened was before the 2016 season, when the Dodgers didn’t re-sign Zack Greinke and tried replacing him with a broken down Scott Kazmir.

But offseasons like this remain within the boundaries of acceptability the Dodgers have established for themselves.

With every move they don’t make, the Dodgers have confirmed the long-standing suspicions about their motives.

Their objective isn’t to win a World Series. It’s to win another division title.

The attitude was reflected in their courtship of Cole. Did they want him? Sure, but not enough to make the kind of offer that would have brushed back the New York Yankees, who signed him to an nine-year, $324-million deal.

Once Cole came off the board and eliminated the most obvious shortcut to a World Series, the Dodgers reverted to their old tricks.

They were open to offering Ryu a four-year contract, but with a considerably lower average annual value than he received from the Blue Jays, according to a person familiar with the situation who requested anonymity because he wasn’t authorized to speak on the record.

They weren’t a championship team with Ryu and they can still finish on top of the National League West without him.

The way this offseason has unfolded is a reminder that Guggenheim’s cash-hording wouldn’t be possible without a dependable group of coconspirators , namely the owners of the other teams in the division. Regardless of whether they are frugal or inept, these franchise owners have essentially created an unobstructed path to the postseason for the Dodgers.

The absence of competition has spared the Dodgers the obligation to pay for premium free agents. When the free-agent prices have made them uncomfortable, they have been able to explore the trade market, which is less predictable but also often less expensive.

And this is where the Dodgers are today, as Ryu was the last free-agent pitcher who could have helped their rotation.

Most of the game’s elite players are on teams that won’t dump them for prospects. To acquire quality players, the Dodgers will likely have to give up quality players, meaning they can only make marginal improvements in a trade.

Potential trade partners hold a degree of leverage over the Dodgers at this point, as they know the Dodgers can’t pivot back to the free-agent market. The Dodgers’ only recourse will be to wait.

Their weak division has afforded them the luxury to do that. More than any other team, the Dodgers have been able to shift the burdens of the offseason to the July 31 trade deadline.

What’s the worst that can happen to the Dodgers until then? It’s not as if the San Francisco Giants or any of the other teams in the NL West can stand up to them.

But waiting has its dangers, as the Dodgers learned last season, when they failed to make a midsummer deal for an impact player.

Ownership’s refusal to pay for Cole has placed a massive burden on Andrew Friedman. As the president of baseball operations, Friedman will have to make the kind of earth-shaking trade that will convince an increasingly skeptical fan base the team feels the urgency to win now.

When the Dodgers were thrifty in previous offseasons, they explained they wanted to remain flexible in case they encountered a special opportunity in the future. Well, that opportunity presented itself this offseason in Cole’s availability and they blew it. If they don’t make up for that, the fans will figure out what was in front of them this entire time, that the organization never wanted a World Series as much as they did.